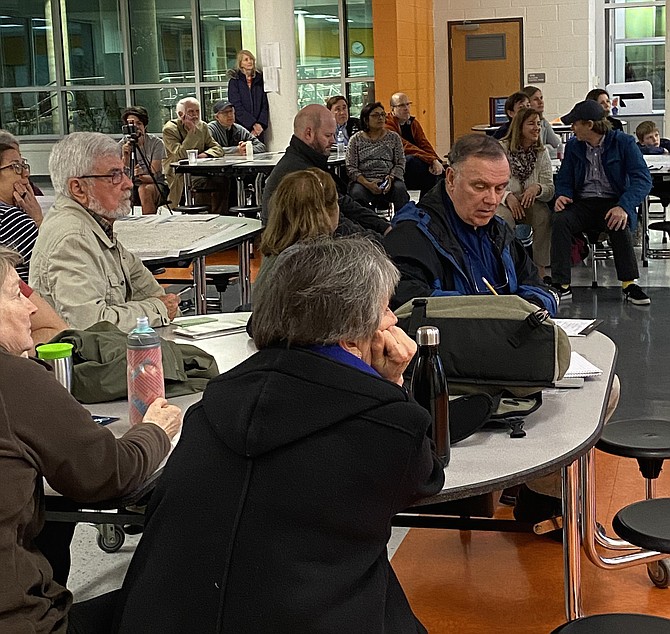 Cyclists, pedestrians and drivers interested in what's happening in their community attend the meeting. Photo by Mercia Hobson. 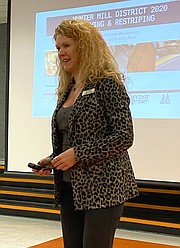 According to fairfaxcounty.gov: "VDOT and the Fairfax County Department of Transportation use this program as an opportunity to increase driver, bicyclist and pedestrian safety with road and crosswalk improvements while minimizing the financial investment in restriping work."

Kelly Westenhoff of Reston was one of approximately 40 people who attended the meeting to learn about VDOT's repaving and proposed striping changes and give feedback. "As a cyclist, driver and pedestrian, I'm interested in how restriping will serve to make travel in Reston safer for all," she said.

Presenter Claudia H. Liana, P.E., Assistant Director, Transportation & Land Use Fairfax & Arlington provided an overview of primary and secondary roads in the area. Primary roads, she said, have conditions rated every year. In contrast, secondary roads, which are anything from a very small neighborhood cul-de-sac up to roads such as Braddock Road or Reston Parkway – all of those are included in the secondary system. "Those are the ones that people are typically concerned about," she said.

According to Liana, funding picked up for 11,000 miles of secondary roads in 2018 to $140 mil. "And our numbers are pretty much still up there," she said. "We are now at the point with the fusion of the extra funds, we've gotten up to the point where 48 percent of our (secondary roads) are in good shape...It still means more than half of our roadways are in need of paving...We just can't do everything in one year," Liana said.

Laura Robinson of Reston said, "I'm at this meeting due to my interest in Glade Drive. I would very much like to see the narrowing of all of Glade Drive rather than piecemeal bike lanes and shared car/bike stretches."

"Paving-related comments (e.g., drainage issues, missing signage, signal repair, walkway repair and sight distance issues due to vegetation overgrowth) should be submitted through the myVDOT portal: https://my.vdot.virginia.gov/. If you would like to request road repairs, follow the "I need a road repaired" link on the VDOT portal or call 1-800-FOR-ROAD (1-800-367-7623). Unfortunately, no additional roads can be added to the preliminary 2020 paving schedule at this point, according to fairfaxcounty.gov.