Loan Sharks in the Water
Votes

Loan Sharks in the Water

Lawmakers crack down on predatory lending, although reform won’t happen for eight months. 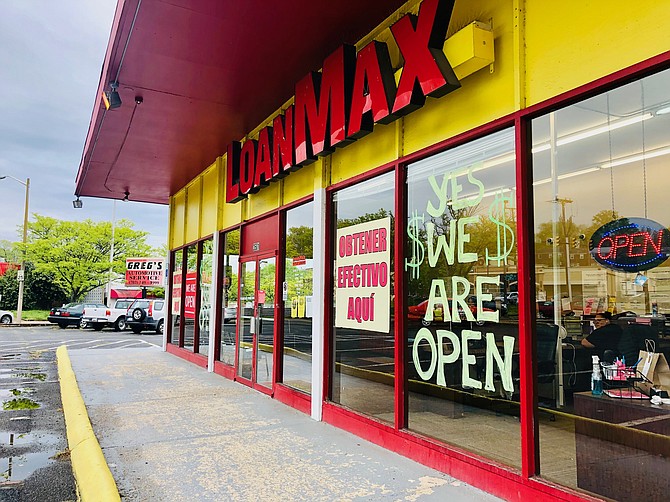 The LoanMax in Arlandria remains open during the stay-at-home order, offering loans to struggling families at more than 200 percent annual interest as unemployment claims skyrocket. Photo by Michael Lee Pope.

The LoanMax on Mount Vernon Avenue in Arlandria is open for business during the pandemic, and colorful signs in the windows announce in English and Spanish that the car-title lender remains open during a stay-at-home order — offering loans at 200 percent annual interest during a time when unemployment claims in Alexandria are skyrocketing. Those kinds of interest rates will be illegal under the Fairness in Lending Act, which Gov. Ralph Northam signed last week after lawmakers signed off on some last-minute changes. But the ban on such high-interest lending won’t take effect until New Years Day 2021, which means high-interest lenders have eight months to engage in an unprecedented lending spree during the worst economic crisis since the Great Depression.

“They’re predators, and there’s blood in the water. They can smell it,” said Jay Speer, executive director of the Virginia Poverty Law Center. “I don’t think there’s any doubt about it. They’re going to clean up.”

Conservative Democrats in the Senate wanted to push the effective date back to July 1, 2021, which would have given high-interest lenders and their team of lobbyists in Richmond an opportunity to kill the reform effort in the next General Assembly session. Attorney General Mark Herring pressed for an effective date of July 1, 2020, which would have capped interest rates at 36 percent APR this summer, a time when the economy is likely to remain in crisis. The governor suggested an effective date of Jan. 1, 2021. During a one-day reconvene session last week, lawmakers signed off on the governor’s suggestion, and the Fairness in Lending Act was signed into law with an effective date of New Years Day 2021.

“This is great news for the many Virginians finding themselves in a tough financial situation because of COVID-19 and who may turn to small-dollar loans in order to make ends meet,” said Attorney General Mark Herring in a written statement after the bill became law. “These consumer lending reforms will close easily abused loopholes and provide much needed protections for Virginia borrowers.”

HIGH-INTEREST LENDERS have been under fire for years, and critics say the business is designed to take advantage of low-income people who are in need of quick cash during a moment of crisis. The industry responded by flooding candidates for the General Assembly with campaign cash. Most of that money went to Republicans, although the campaign cash extends to prominent Democrats in key positions. LoanMax, for example, gave $30,000 to the Virginia Senate Democratic Caucus and $25,000 to Senate Democratic Leader Dick Saslaw, who represents the West End of Alexandria in the state Senate.

“Generally I have not supported bills that put people out of business,” said Saslaw when asked about the bill after it was introduced. “So we’ll see.”

Senate Democrats were wary of putting high-interest lenders out of business too soon. Sen. Dave Marsden (D-37) suggested that the Fairness in Lending Act have a reenactment clause, which would have required lawmakers to pass the bill again next year in order for it to be effective. Critics said that would have been a death knell for the reform effort, giving the industry an opportunity to mobilize lobbyists and step up campaign contributions when lawmakers returned home after the session was over.

“We still have to maintain access to this credit,” said Marsden, who received $11,500 from LoanMax since 2007. "I think a reenactment clause slowing this train down a little bit would give us time to react next year giving these companies a time to transition.”

The Senate Commerce and Labor Committee ended up striking a deal, delaying enactment until July 1, 2021 in an effort to gain enough votes among conservative Democrats in the Senate to get the bill to the governor’s desk. Northam amended the bill to move up the effective date to Jan. 1, 2021, a change that encountered some opposition in the Senate. During a dramatic Senate session last week at the Science Museum of Virginia, senators initially approved of the governor’s change then rejected it then took it up a third time and narrowly approved the amendment. Marsden voted against the amendment in all three of those votes. Saslaw ended up changing his vote against the accelerated effective date, voting against it twice and then eventually supporting the governor’s amendment on the third and final vote.

“Saslaw has been very close to these lenders over the years, but I think he does care about how people view him,” said Kim Bobo, executive director of the Virginia Interfaith Center for Public Policy. “This is one issue where he doesn’t want to be on the wrong side of history.”

THE FAIRNESS IN LENDING ACT caps interest rates at 36 percent APR, a dramatic reduction in the nosebleed levels that are legal today. Car-title lenders can charge a maximum of 264 percent interest. And the online lenders have essentially no rules, allowing them to charge as much as 800 percent interest on loans in Virginia. The new law does allow these companies to charge monthly fees, depending on what kind of loans they are offering. It was introduced by Del. Lamont Bagby (D-74) and state Sen. Mamie Locke (D-2).

“This bill was brought forward because Virginia has some of the weakest laws in the country for payday and title loans,” said Locke. "The same lenders are charging Virginians three times more than what they are charging in other states. This is unacceptable, and Virginia consumers deserve better.”

“That’s a deeply inefficient business,” said Alex Horowitz, senior research officer at Pew Charitable Trusts. “What happened in Colorado and what happened in Ohio is that lenders did consolidate some locations. But a neighborhood that used to have seven or eight stores afterward did have three or four and the remaining stores doubled their customer count.”