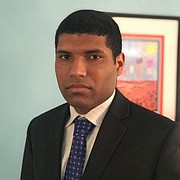 Great Falls resident and Harvard University graduate Kiran Hampton was awarded a nationally-prestigious George J. Mitchell Scholarship. He will spend the 2021-2022 academic year studying at Queen’s University Belfast in Northern Ireland. Hampton was selected from a national applicant pool of 453, the most ever in the program’s history.

Hampton recently graduated from Harvard with High Honors in History and Literature. As the President of Harvard Radio Broadcasting, he ran the largest open organization on campus, setting and executing policy for a 24/7 commercial radio station with a large share of the Boston market. Hampton and his team grew WHRB administratively and financially while significantly increasing its membership and improving the quality of its broadcasting. Hampton is proficient in Arabic, was a Harvard Crimson Editorial Board Editor, and tutored students for the citizenship exam. He interned for the Democratic Caucus of the House of Representatives and was a ghostwriter/speechwriter for a Democratic candidate for Fairfax County Commonwealth's Attorney. At present he works with the Fairfax County NAACP, supporting their educational priorities and justice initiatives. His father is an Iraq War veteran and Kiran wrote "The last four generations of my family joined the army and … were both victims and agents of the white American imperial will." His academic interest is in administrative and economic institutions, "in particular, in the sliding schema of regulation, by which private organizations and the state enforce economic and social rules with maniacal harshness against the poor and flexible permissiveness against the powerful." Hampton has been admitted to Harvard Law. He will study Economics at Queen’s University Belfast.