ArPets: Appreciating Our Pets this Thanksgiving 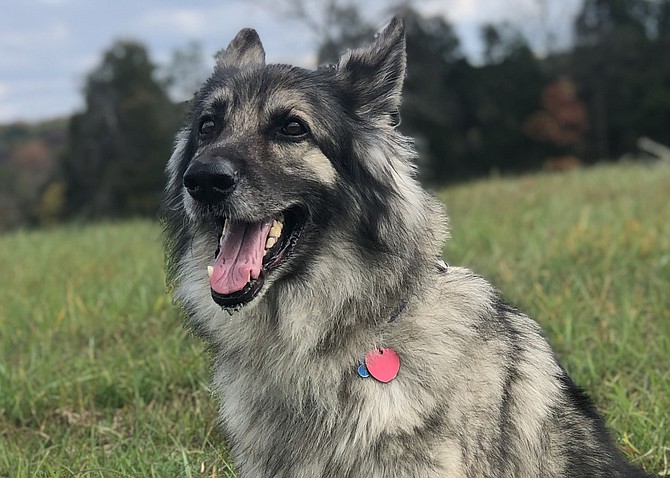 "Since I no longer have a commute, Bear and I have been going on extended morning walks and it’s helped me keep some semblance of a routine [during the pandemic] ... I’m more thankful than ever that he’s around." — Kelly Davison. Bear, a 9-and-a-half-year-old German shepherd mix, resides in Arlington Heights. Photo contributed by Kelly Davison 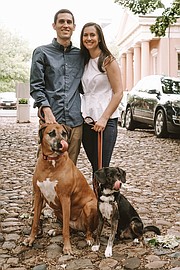 Kate Dubrowski and Alex Picciano with Jordan and Mason. 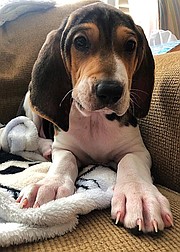 "I am thankful for him because he has already brought so much joy and happiness to our family." — Linda Fettig. Elvis, a two-month-old coonhound mix whose family includes Linda and David Fettig and their daughter Michelle as well as Linda's 99-year-old mother, Pauline Franko, calls the Overlee Knolls neighborhood home. 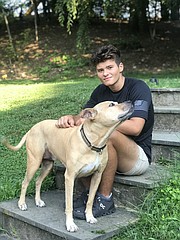 "We are thankful for her being our best friend and the best foster mentor/sister Lost Dog and Cat Rescue Foundation could ever ask for! We’ve had over 50 dogs come to us and leave better,” because of Beatrix, said Claudia Salem. Beatrix, age 12, lives with Salem and her son Max, who has a special bond with the pitbull mix. They live in the Donaldson Run neighborhood. 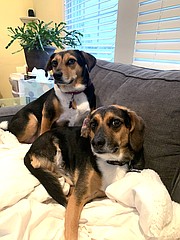 "My son [Nicholas] and I are so thankful for our two rescue dogs. They have offered us so much love and many laughs during such a dark time. They love to keep the squirrels away from the bird feeder and they are vigilant watchdogs who alert us when the neighbor’s cat dares to enter our yard." — Elizabeth Piepenbring. Copper, a 4-and-a-half-year-old beagle/dachshund mix, and Lucy, a 3-year-old beagle/Catahoula leopard hound mix, live in Lyon Park.

Local rescues are reporting that pet adoption is at an all-time high with more people working from home and looking for joy and companionship. According to a Korean study, even pet insects can help increase happiness. Yup, among folks over 65, "Caring for insects was associated with a small to medium positive effect on depression and cognitive function."

Now I'm not suggesting that we should all race out to cheer ourselves up by getting an orchestra of crickets – yep “orchestra” is the term for a group of crickets. But the truth is that having and caring for pets has long since been tied to the happiness of owners all over the world. And particularly at this crazy time.

Our fellow northern Virginians say that their pets give them a lot to be thankful for this Thanksgiving.

Jordan and Mason knew exactly what they were doing when they dragged their respective owners, Kate Dubrowski and Alex Picciano to the Riverhouse apartment complex dog park. That day, as the dogs played, the two chatted and four years later, on Nov. 15, they tied the knot!

The humans report that "[They] are so thankful [the dogs] brought them together." As for Jordan and Mason, they are enormously pleased with themselves for their matchmaking abilities and are considering putting out a shingle to help other local singles. The family has recently moved to the Del Ray neighborhood in Alexandria.

Interested in adding a pet to your family through adoption or fostering? There are quite a few rescues in the area offering a range of pets including dogs, cats and smaller animals. Here are just a few: