ArPets: It'll be an Ollie Jolly Christmas for this Arlington Family
Votes

ArPets: It'll be an Ollie Jolly Christmas for this Arlington Family 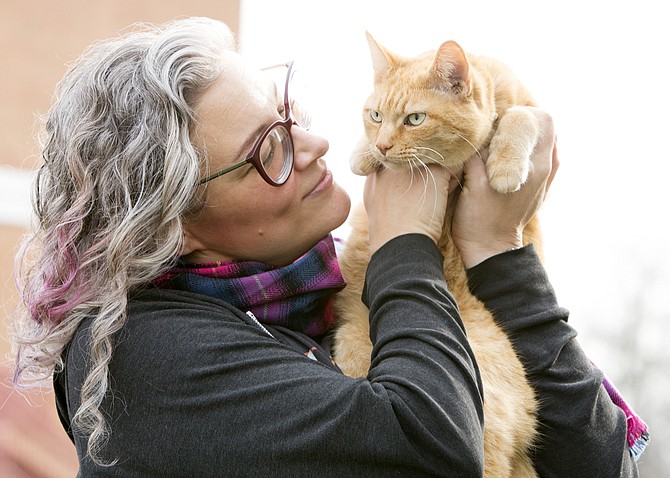 Getting the word out.

Ollie with sibs looking on.

It started as a totally normal day with Oliver the cat venturing out for her daily adventure. But hours later, Oliver or Ollie, as she is fondly called, had not returned.

Ollie and her brother Dodger enjoy exploring their Arlington neighborhood, but generally don't go out of earshot. So when Ollie didn't come when called on Saturday, December 12th, Emily Carmichael was worried. Oliver and Dodger are very close and as the hours passed, he seemed worried too.

If an outdoor cat doesn't come home, that generally means something has disrupted their normal routine. Carmichael feared that Ollie might have gotten accidently trapped in someone's garage. Or, as Ollie doesn't like to wear a collar, perhaps some well-meaning stranger had noticed her and thought she was homeless. "She absolutely loves people, loves attention, and is so trusting she will approach strangers on the street," says Carmichael.

Hoping to find her beloved ginger feline, Carmichael sprang into action; posting on Nextdoor, in multiple Facebook groups, on Craigslist and several lost and found pet networks. In addition, she posted flyers around her neighborhood. At the time, "[her] sincere hope is that all of our neighbors will carefully check their garages, sheds, or any other enclosed spaces where a cat might be hiding. Doing so might save her life and my little family's Christmas."

On Dec. 17, six long days later and eight hours after putting a big sign across her fence, there was a knock at Carmichael's door. A family had apparently found Ollie in the street and didn't realize she had a family until they saw Carmichael's fence sign.

Carmichael says from now on, Ollie must learn to tolerate a collar. And she hopes that more people who find an animal will report it. "Even one phone call or one email to a shelter," she says, "can dramatically speed up a reunion, and relieve a family's worry."

As for Oliver's reaction to all the fuss, Carmichael says, "She very clearly enjoyed her vacation."

This week's fun fact: Did you know that 80% of ginger cats are male?

If you are interested in adding a cat, dog or small animal pet to your household, here are a few local rescue organizations who may be able to help you find your perfect match: