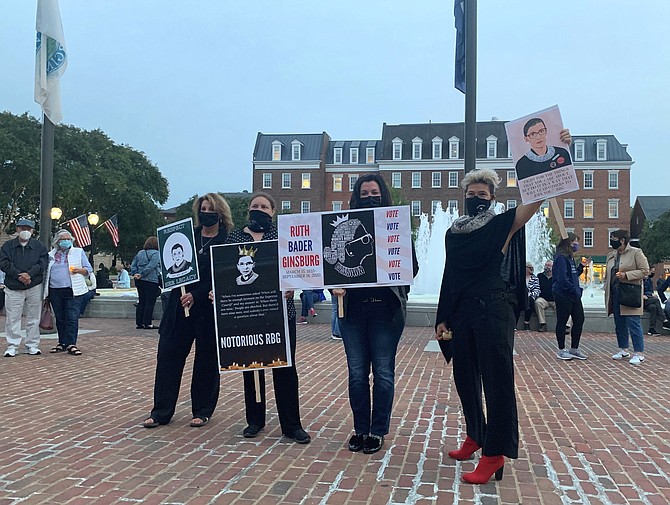 Attendees hold candles as they listen to remarks at the Sept. 24 Market Square vigil in honor of Supreme Court Justice Ruth Bader Ginsburg, who died Sept. 18 at the age of 87.

Generations of Alexandrians turned out Sept. 24 to participate in a candlelight vigil and walk in memory of Supreme Court Justice Ruth Bader Ginsburg, who died Sept. 18 after a battle with cancer.

The memorial, which was attended by a crowd of 200, began at Market Square with a moment of silence followed by speakers who honored Ginsburg’s accomplishments and leadership.

“We are here to honor a phenomenal woman who has done phenomenal things in her life,” said City Councilwoman Amy Jackson, who was one of the organizers of the event. “She was small, but she was fierce, she was mighty, and we all need to remember how much she has put towards our civilization concerning gender equality and civil rights.”

Ginsberg was the second woman to serve on the U.S. Supreme Court. She was appointed to the nation’s highest court in 1993 following a career in academia and as a prosecutor. She is best known for her opinions in cases focused on women's rights, gender equality and privacy.

In addition to Jackson, other organizers of the event included Kelly Grant, Gina White and Beth Lawton. Virginia Delegate Jennifer Carroll Foy and Commonwealth’s Attorney Bryan Porter were in attendance and addressed the crowd.

“I am very humbled to be here this evening to honor someone who as a lawyer made a huge impact on my legal philosophy,” Porter said. “I also want to honor her as an American for helping bridge the gap and making sure women are empowered and can live the American dream and are not held back by sexism or other prejudices in the workplace or in the realm of education.”