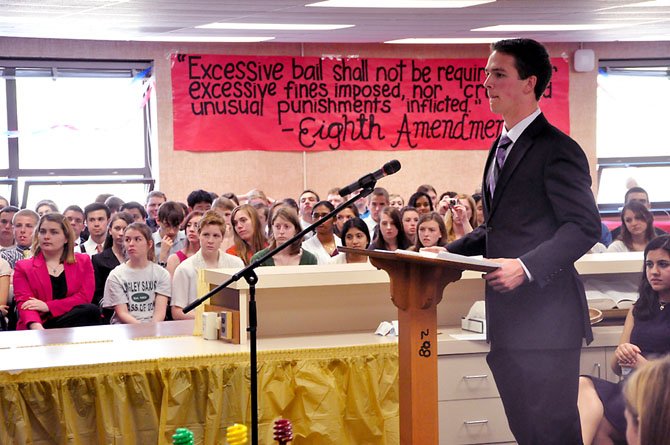 McLean — Langley High School’s senior class spent Monday, March 19 going over two Supreme Court Cases with a fine-tooth comb, as part of the school’s annual Case Day. The event, now in its 20th year, allows the class to break down an upcoming case that will be heard by the Supreme Court, with students serving as counsel, justices, presenters and many other roles.

This year, the History Honor Society researched the current justices and tried to guess how each justice would decide. Here are their predictions.

This year’s cases, which will be heard starting March 20 by the Supreme Court, are Miller v. Alabama and Jackson v. Hobbs. Both cases involve young men aged 14 and whether or not they should receive life in prison without the possibility of parole, and whether this violates the eighth amendment, prohibiting cruel and unusual punishment.

In 2003, 14-year-old Evan Miller, along with 16-year-old Colby Cameron beat Cole Cannon with a baseball bat, then proceeded to set his trailer on fire, killing Cannon. Miller was tried as an adult in 2006 on charges of capital murder and first degree arson, and sentenced to life without parole.

In 1999, 14-year-old Kuntrell Jackson was with two older boys who murdered a video store clerk. He was sentenced in 2003 to capital felony murder and aggravated robbery, and was given a mandatory life sentence without parole.

BOTH BOYS came from abusive households and had previous records with substance abuse and other juvenile offenses.

"Jackson’s mother was a convict, arrested when he was 6 years old for shooting someone, and his brother was arrested when he was 13 for shooting someone. Jackson only saw violence from his parental figures. Similarly, Miller, whose parents were both alcoholics, whose father beat him, his mother and his siblings constantly, had no other means to learn how to display his anger," said Nick Rifken, giving a presentation on social and developmental psychology as a member of the Psychology Club. "Neither of these children saw socially acceptable behavior from their parents. The only thing they saw from their parents, the first teachers in their lives, was violence."

Seniors Shams Haidari and Sabrina Khan were given the task of defending Jackson and Miller’s petition, saying that 14 is too young to impose life in prison with no possibility of parole to people who hadn’t even fully developed brains yet, and whose background made them susceptible to violence.

"They were certainly gruesome crimes, especially involving a 14-year-old, but the first thing you have to do is reconcile the emotional conflict with the law," Haidari said.

The counsel, also made up of Matthew Moser and John Studabaker, made their arguments to a nine-person Supreme Court that included local lawyers, two students and John Scalia, son of Supreme Court Justice Antonin Scalia serving as chief justice.

"The process certainly got my interest up in law, I feel like after this experience I know some of what it takes to put your full heart into studying, reading and fully forming an argument," Studabaker said. "I feel like that has prepared me for any profession I might choose, however law is certainly one of those options that I will consider."

In the end, the justices voted five to four in favor of the respondent, saying that life without the possibility of parole does not violate the eighth amendment. Justice Nathaniel Howe, a Langley senior, read the majority decision.

"It is not clear that [Jackson] affirmatively desired to end the life of another human being. However, he involved himself in the commission of a violent crime, in which homicide was a possible, if not likely result. So long as we continue to allow states to impose life without parole for felony murder when committed by adults, we find no principled reason to hold differently for juvenile that exhibits a similar degree of criminal intent." 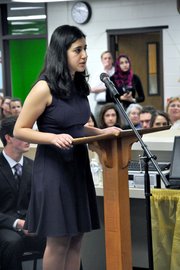 Spencer Shabshab, the other Langley senior serving as a justice, composed and read the dissenting opinion.

"We would extend the protections afforded to juveniles and prohibit life sentences without the possibility of parole in the cases presented to us," he said. "Juveniles are less able than adults to consider the potential consequences of their actions, extricate themselves from the situation that would result in the loss of human life or execute independent judgement. These inherent psychological and physiological disadvantages diminish their legal and moral culpability."

Even students who weren’t presenting or arguing had duties to fulfill leading up to the event. Justin Strahan headed up the finance committee, and it was their job to procure sponsorships, donations and set a budget.

"It was a really interesting process, a mix of hands-on distribution, marketing and more," Strahan said. "It was so multi-faceted that you couldn’t help but learn a lot about a lot of different areas. I’m hoping to study finance in the future, and I think this was a valuable experience."

Members of the education committee went to elementary, middle and even fellow Langley students to explain what Case Day was and what it hoped to accomplish.

"My job was to focus on getting in touch with the junior class, to get them involved and get them a glimpse of what happens so they’re ready to pick it up next year as seniors," said Tommy Orme of the education committee. "We were able to speak to government classes and get people involved, because we wanted them to be in the audience asking questions."

Other school clubs were also involved. The History Honor Society created Facebook pages for each Supreme Court Justice using their past decisions to guess what they might think about the current cases. The Science Honor Society gave a presentation about how adolescent brains might not develop the adult level of decision making until they were older, bringing into question whether or not it is just to imprison someone whose brain hasn’t fully developed yet. 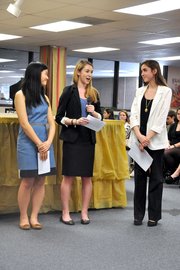 THE DAY also featured discussions by groups who wrote amicus briefs for the Supreme Court case, including Amnesty International, the Equal Justice Initiative, the Former Juvenile Court Judges, the National District Attorney’s Association, the American Probation and Parole Association, the NAACP Legal Defense Fund and the National Organization of Victims of Juvenile Lifers.

"It’s really energizing to see so many people so wrapped up and interested in advocating for people who are in need of it," said Benjamin Maxymuk of the Equal Justice Initiative. "It motivates me to work harder."

For the event coordinators, Chaffee Duckers, Sun Park and Alicia Underhill, Case Day consumed their lives since they were chosen last December. While the trio, as well as their classmates, put in months of hard work, Underhill called it an amazing experience.

"My favorite part of putting together this whole day has been talking to the students and seeing how we’ve all come together with various talents and combined effort to bring it together," she said. "I’ve met so many people that I didn’t know before, I’ve seen sides of people that really impressed me and I think we’ve done a really great job in our last big project together as a senior class before graduation."