Advancing Diversity and Inclusion Through Changes in TJ Admissions
Votes

Advancing Diversity and Inclusion Through Changes in TJ Admissions 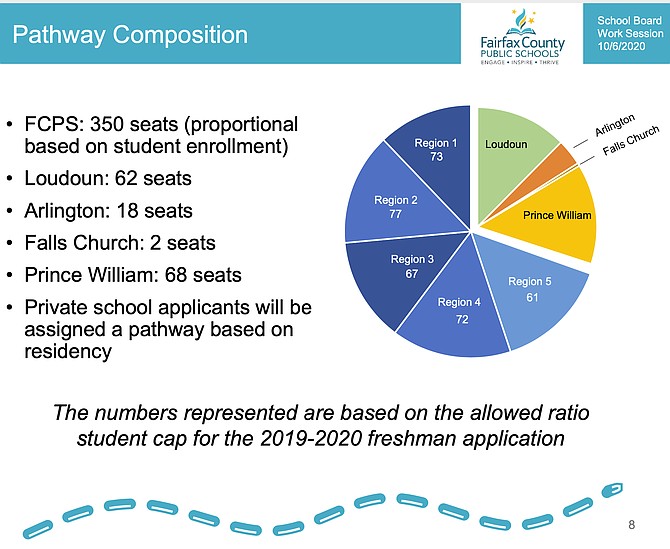 What’s planned next and when.

Top-level discussions concerning proposals by Fairfax County Public Schools leaders and School Board members to increase the population of underrepresented students of color at Thomas Jefferson High School for Science and Technology (TJHSST) have flown fast and furious the last four weeks. In the most recent plan in the process dated Oct. 8, a revised Merit Lottery proposal is on the table. To be accepted into the Merit Lottery, students would need to meet minimum requirements and be randomly selected within their pathway, according to Superintendent Scott Brabrand in his Oct. 8 presentation.

As background, since TJHSST is a regional Governor's school within Fairfax County Public Schools, an applicant’s pathway to the school is not only as a Fairfax County Public Schools student but also as a student residing in Loudoun, Arlington, Falls Church, Prince William and if attending a private school. The School Board reached consensus at its Oct. 8 regular meeting that the TJHSST admission tests and application fee should be removed.

RESPONSES to the proposed revisions by community members were split. Some who spoke at the meeting cited concern over a two-tiered admission process, impact on the prestigious school and unintentional discrimination while others applauded the effort to increase admittance for underrepresented groups.

The process to change TJHSST Admissions Policy began Sept. 15 when Brabrand presented his recommendations to the School Board to improve diversity by establishing a Merit Lottery System. On Sept. 23, FCPS presented a Community Town Hall with Brabrand to hear feedback on proposed policy changes to TJHSST Admissions. An additional three events related to the matter occurred the first full week in October.

At the Oct. 6 School Board Work Session, the Superintendent's newly revised Admissions proposal showed a rolling admissions process to keep a class of 500 students. Based on a holistic review of their applications, the highest-evaluated students would be offered an opportunity to fill 100 of the available 500 seats. The remaining 400 seats would be filled by a merit lottery, with FCPS region slots proportional to student enrollment. To be accepted into the Revised Merit Lottery, students would need to meet minimum requirements that remained unchanged: student portrait sheet, problem solving essay and experience factors. The highest-evaluated 100 students would be offered admissions. The remaining students would be selected randomly within their pathway.

At the Oct. 7 Community Town Hall on the Admissions Policy, Brabrand said, "We know historically over decades we have been challenged having the diversity of the TJ admitted class match the diversity of Fairfax County Public Schools." He added that during the School Board Work Session the night before, Oct. 6, the Board provided consensus to eliminate the battery of tests, Quant-Q, ACT Aspire Reading and Science, that were "squeezing out the diversity in our students as they seek to become part of the admitted class at TJ. "

Commenting on the $100 application fee used in other years, Brabrand said, "A fee frankly is a way to send a message [that] this is something for you to be a part of or not. Eliminating the fee is a step in the right direction." Other requirements including the problem-solving essay, student information sheet, algebra I in the eighth grade, and minimum GPAs in math and science would be retained. Brabrand said that the Board also asked him, on Oct. 6, to look at additional capacity space at TJ, its "pathways" and to provide additional slots, not just for Fairfax County Public Schools but also for regional partners whose children apply and are admitted to the school. According to a spokesperson for Fairfax County Public Schools, "The Board also agreed that the Superintendent's revised proposal should include a capacity increase at TJHSST to be more comparable with other schools in the division; examine an approach that considers the applicant pool by pyramid and middle school; present a holistic admissions process that considers lottery and non-lottery options; and initiate the revised admissions process timeline for the Class of 2025 to begin no later than the end of January 2021,"

During the Oct. 8 comment portion of the regular Fairfax County School Board meeting, feedback from 15 parents, students and constituents who signed up to speak revealed a sharp divide on the proposed Revised Admissions policy.

Sujatha Hamilton, the Fairfax County NAACP education chair, said some middle school communities did not send applicants to TJ resulting in unequal representation. "Because we don't get emails and letters from their parents… does not mean that they don't pray for opportunities or resources for access. I am begging you to remember them. They are your constituents too even though they may not even know that the Board exists to serve their needs. Please do not send this out to an external body or delay."

Countering, Srinivas Akella questioned the racial code-based system, saying it would institutionalize the very racism that it claimed to fight. “You are putting the future of our kids in the hands of administrators who are tone deaf to the needs and concerns of [the] Asian American community [and] have an anti-Asian bias.”

Hanning Chen addressed the diversity and culture gap in learning, opportunity and programs. "Does anyone know why there are so few Black and Latino students in TJ? Because of the failure of FCPS of educating those underserved students whose FCPS's outreach programs have dropped by 50 percent since 2011. Over the last ten years, those abandoned students, lacking FCPS resources, were not even mentioned once by FCPS leadership until now. Those poster kids are suddenly needed for a political show," he said.

Didi Elsyad, a student at TJHSST said, “TJ is segregation in its modern form.”

IN HIS PRESENTATION to the Board, Brabrand said that statistically the revised Merit Lottery system should provide some increase in admittance for underrepresented groups while allowing top performers entry into the school. However, he acknowledged concern that the two-tiered admissions process may have unintended impacts on the Caring Culture at TJHSST and may continue to admit more students from a few top-performing FCPS middle schools.

The Board approved a motion directing the Superintendent to develop a plan to establish policies and procedures for a regional governing board for TJHSST consisting of a proportional representation of school boards that send students to the school.

In the meantime, eighth graders and their families wait for a firm admissions timeline, and the School Board works to find consensus on proposed process revisions. "My office will continue to collaborate closely with the School Board to ensure that the proposed changes will help all students have access to TJ based on the merit of their application and not based on test scores and unequal access to preparation programs," said Brabrand.

This article was revised Oct. 21, 2020 to correct the attribution of Srinivas Akella's quote.