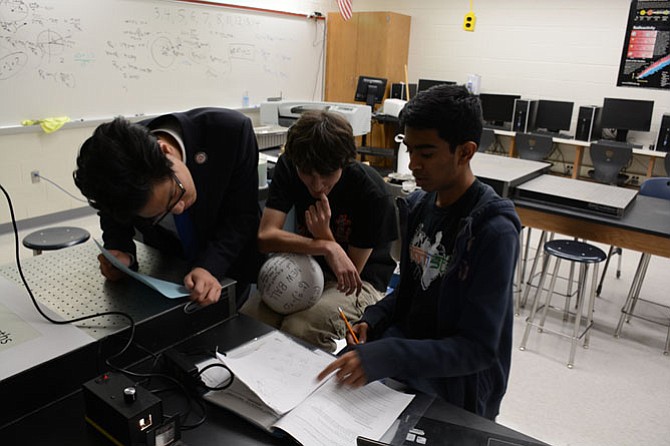 Protecting student privacy under Virginia Code § 2.2-3705.4.(1) as well as the federal Family Education Rights and Privacy Act, Fairfax County Public Schools spokesman John Torre said, is the goal with withholding the data. “Without permission of the student, families, it’s not a place we’re going to go,” he said.

Dr. Priscilla M Regan, acting senior associate dean of the George Mason University School of Policy, Government and International Affairs, said this cautious practice is “definitely typical” of what many institutions are doing.

“Health care, education, anything where you’re dealing with anything that could be considered sort of sensitive and personally identifiable — it’s really likely there will be more of this as it’s becoming easier to identify people,” she said.”

Regan’s take is Fairfax County has likely made a calculation as to the line at which they feel individual students become “re-identifiable” and privacy becomes a concern under Virginia Code and federal law.

She added in her interpretation of the threat to students: “An indication of their scholastic achievement, their sense of how they might see themselves, the risk they’ve taken in taking the Thomas Jefferson exam, whether you’re admitted or not admitted, that’s the parents of children in schools’ decision. It’s up to them to reveal that information.”

Approximately 78 percent of admitted students are from Fairfax County and 22.3 percent are from Arlington, Loudoun and Prince William counties and the City of Falls Church.

“Admissions to Thomas Jefferson are not representative of the Fairfax County Public Schools population,” Storck said, “and certainly not of the Mount Vernon District population. We have some serious issues about equity and how do we address that?”

Data on which feeder middle schools supplied which percentage of students to the new freshman class speaks more to the inequity. Mount Vernon-area Alexandria middle schools Whitman, Carl Sandburg and Hayfield were among 17 of a list of 26 feeder schools released by Fairfax County with the total number of admitted students to Jefferson redacted.

Spokesperson for Fairfax County Public Schools John Torre explained the redactions are because the numbers are low enough (fewer than 10 admitted) that individual students could potentially be identified.

“MAYBE WE OUGHT to rename the school ‘Herndon-Falls Church Alternative School for the Gifted and Wealthy,’” said Del. Scott Surovell (D-44), referring to the feeder middle schools supplying the top quantities of students.

“To me, it’s the canary in the coal mine about how Fairfax County educates its children,” Surovell added. “If you’re low income, you don’t get the same education.”

“Why is this such a significantly skewed distribution?” asked Fairfax Station resident Lolita Mancheno-Smoak, a candidate for School Board in 2011 and co-founder of the school children advocacy group Coalition of the Silence.

“If I go under the assumption we’re a top-rated school system, everyone is receiving the same caliber and rigor of education at the advanced academic program centers and there’s a fair and equitable process of identification of young people to be admitted into these centers.”

“There’s no guarantee of getting into Thomas Jefferson,” said Storck, “but we have to ensure students have equitable opportunity to get in, and I don’t believe we’re doing that satisfactorily.”

It’s not that there have been no efforts by the county to help underrepresented populations, Storck conceded.

The “Young Scholars” program in 82 schools is aimed at identifying “potential high achievers” from these groups, according to Torre.

JEFFERSON ADMISSIONS Director Jeremy Shughart said in a statement that last fall the school’s admissions office created an advisory committee tasked with “looking at a variety of admissions components and making recommendations for possible adjustments to future admissions cycles.”

This is a continuation of ongoing debating of modifying the school’s admissions policy, the most recent updates to which Torre said were in 2013.

“The policy now states that students (semi-finalists) will undergo a comprehensive, holistic process that assesses their ability to meet the rigors of the TJ curriculum and the potential to be effective contributors to the school’s learning experience,” he said in an email.

Before that, he said, all the admission components were scored independently of each other and then added together for a final numerical score by which the top students were chosen to be offered admission.

A decade earlier, near the end of 2003, the School Board appointed a “Blue Ribbon Commission” group of experts to review Jefferson’s admissions practices. The commission’s recommendations led to a revised admissions process that affected the 2004-2005 class of applicants.

Elizabeth Schultz, who represents the Springfield District on the School Board, thinks the revisions haven’t measured up to their intended effects.

“I think we have fiddled and tweaked consistently the admissions practice to the detriment of the quality of students headed to TJ,” she said. “In the end, we have contorted the process so far as to water down what it means to achieve at an academic rigor level necessary to be a successful student for all four years at TJ.”

Furthermore, she doesn’t know if leveling the playing field for potential applicants is necessarily the right answer.

“Should we be increasing the rigor of the K-12 math curriculum?” Schultz said. “Absolutely. Rigor and tracking of sustained rigor in math curriculum beginning in elementary schools needs to be improved.”

School Board members other than Storck and Schultz didn’t respond to requests for interviews. 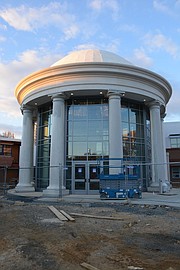 Thomas Jefferson High School for Science and Technology added a Monticello-esque dome in the first phase of its renovation project.

“Could we broaden student participation in higher level math courses earlier?” Schultz added. “I think we could. Does there need to be a systemic delivery of the curriculum across the division? Without a shadow of a doubt.” Schultz referenced a recent School Board work session where a math component audit was discussed.

For Jefferson admissions, Schultz favors a simpler, merit-based evaluation separated from name, school (and advanced academic program) gender and demographics. The viewpoint of bringing in the most objectively qualified applicants is one shared by Liz Bradsher of Clifton, who represented the Springfield District on the School Board from 2008 to 2012.

“It’s about the best and brightest in Fairfax County, students who are innately bright,” Bradsher said of the image of Jefferson.

Admissions director Shughart was not available to comment for this story; however, his statement continued: “FCPS will continue to work on increasing diversity at TJHSST and will continue to pursue outreach efforts to ensure talented underrepresented populations of students with a passion for math and science consider, apply to and attend TJHSST as their high school option.”

According to Torre, some efforts already being implemented include information sessions about the Jefferson for rising eighth grade students and their families, explaining some of the programs, admissions process and extracurricular activities. These sessions should engage the other participating school districts as well as all Fairfax County middle, secondary and elementary schools, Torre said.