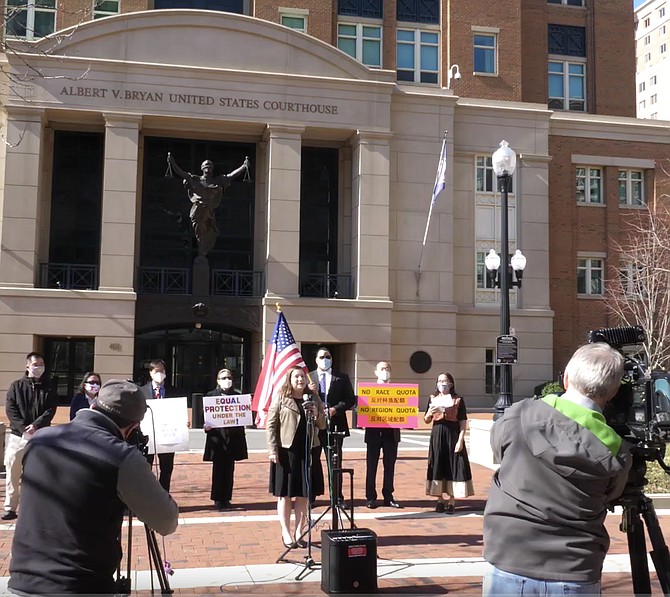 Pacific Legal Foundation holds a press conference on March 10 announcing that they filed a lawsuit against the Fairfax County School Board and Superintendent Scott Brabrand on behalf of their client, Coalition for TJ, challenging recent changes to the admissions policy at Thomas High School for Science and Technology.

The Fairfax County School Board and Fairfax County Public Schools Superintendent Dr. Scott Brabrand face a new lawsuit filed against them last week in United States District Court in Alexandria. The lawsuit alleges race discrimination against Asian-American students by the School Board and the superintendent in changing the admissions process to Thomas Jefferson High School for Science and Technology, known as “TJ.” The Pacific Legal Foundation filed the civil suit on Wednesday, March 10, on behalf of their client, Coalition for TJ, a group of mostly concerned parents at the high school.

“This type of racial balancing is unconstitutional,” said Pacific Legal Foundation attorney Erin Wilcox at a press conference held that morning outside the courthouse.

The Plaintiffs allege FCPS’ recently-implemented overhaul of the TJ admissions process changes, which eliminated the long-standing race-neutral standardized admissions test, is specifically aimed to reduce the number of incoming Asian-American students to racially balance the school according to the racial demographics of the school. “Up until this year, admissions to TJ have been race-blind,” said Wilcox. “Unfortunately, Fairfax County Schools officials apparently believed that this is too many Asian students,” she said.

THE COMPLAINT alleges that without the court issuing an injunction, the number of Asian-American students in the incoming TJ Class of 2025 is likely to be cut in half due to the “defendants’ stated desire to manipulate TJ’s demographics.” “The discriminatory intent they’ve shown is intertwined and an inseparable part of the policies they put in place,” Wilcox said.

According to the lawsuit, in the fall of 2020, Superintendent Brabrand and the School Board saw a reporting requirement by the Virginia Department of Education to include the racial/ethnic make-up and socioeconomic diversity of its students, faculty, and applicants as an opportunity “to completely overhaul the TJ admissions process in order to racially balance the school’s demographics, going far beyond the minimal reporting requirements.”

Located in Alexandria, TJ is a regional Virginia state-chartered magnet school operated by FCPS with students eligible for admission from Fairfax, Arlington, Loudoun, and Prince William counties, and the City of Falls Church. TJ is ranked the number one public high school in the 2020 National Rankings.

The School Board voted to eliminate the TJ merit-based admissions test at its Oct. 6 work session with no public comment opportunity. The complaint quotes Brabrand during the discussion at the work session with the Board to say that eliminating the merit admissions test “eliminat[es] the testing component that squeezed out talent and squeezed out diversity in our system.” Board members said they hoped the new process increased Black and Hispanic representation in the student body.

On Dec. 17, the School Board voted and adopted, with immediate implementation, further changes to the TJ admissions policy applicable to the incoming TJ freshman Class of 2025 and to future years. The Board adopted the challenged admissions policy that limits the number of students accepted from each county feeder middle school to the top 1.5 percent who meet the minimum evaluation criteria-GPA, student portrait sheet, problem-solving essay, and experience factors: including economically disadvantaged students, English language learners, or special education students.

The lawsuit alleges that coupled with the high concentration of Asian-American students at four middle schools – Carson, Kilmer, Rocky Run, and Longfellow – and their history of sending large numbers of students to TJ, racial balancing could be accomplished.

According to the complaint, the plaintiffs sought “to vindicate the rights of Asian-American public school children in and around Fairfax County, Virginia, to compete on an equal footing for admission to the nationally-ranked Thomas Jefferson High School for Science and Technology (TJ) without regard to their race.” Overall, Plaintiffs’ data analysis reported in the complaint that the student body at TJ, at approximately 73 percent Asian-American students under the merit-based race-blind admissions system would drop to 31 percent under the new racial-balancing admissions system for the Class of 2025 with “no other racial group projected to lose seats.”

The lawsuit alleges changes to admissions violate the Equal Protection Clause of the Fourteenth Amendment “...a promise that government at every level will treat every American as an individual, not simply as a member of his or her racial group. Policies like the one implemented by FCPS stand in direct opposition to that promise.”

THE PLAINTIFFS requested entry of an order requiring the Defendants to return to the admissions procedure for entry into TJ in the fall of 2020. “The Coalition for TJ is not going to stand for this kind of discrimination against Asian-American students and they are here to fight for equal protection for their children,” said Wilcox.

Julia McCaskill, an immigrant, and parent of a TJ student and students in grades 8 and 6, said at the March 10 press conference that TJ does not belong to a certain race or certain group of people. Low admission rates at TJ for Black and Hispanics are the failure of the FCPS Board, according to McCaskill. “They failed those under-represented areas over the decades instead of fixing the pipeline issue. The authorities are stirring up hate against Asian-Americans hoping to slash the number of Asian-American students will fix the overdue school problem.”

Asra Nomani, a cofounder of Coalition for TJ and parent of a senior at TJ, said during the press conference that she came to the United States at age four from India. Nomani said she was proud to be working the past nine months with families who came to the United States from communist China and eastern Europe, India, and other places where they faced injustice. “They never could have imagined that they would face injustice in America,” she said.

A Fairfax County Public Schools spokesperson provided a statement saying, “The process continues to be race-neutral and merit-based… As a Governor’s school, we value diversity and believe that it contributes to the richness of the education at TJHSST.”

Parents of 17 middle school students filed the initial lawsuit in November 2020 to overturn the School Board’s decision to eliminate the standardized admission test for TJ and the $100 application fee. On Feb. 2, a Fairfax Circuit Court Judge John M. Tran denied the parents’ request to require mandatory standardized testing in the admissions process. Tran said, “The debate over standardized testing belongs to educational professionals.”

On Friday, March 12, Wilcox said that the next step would be the defendants’ response, either an Answer or a Motion to Dismiss, in approximately 60 days. “I’ve seen in various news articles that FCPS issued a statement on Wednesday. Their legal response to our complaint will be one of the documents mentioned,” Wilcox said.