Live Theater is Back in Vienna
Votes

Live Theater is Back in Vienna 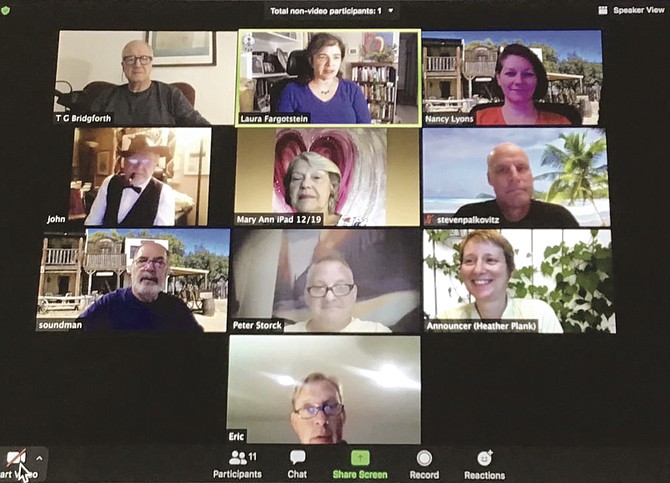 Working to bring original entertainment to the community during the current pandemic, the Vienna Theater Company (VTC) in association with the Vienna Department of Parks and Recreation has developed a unique opportunities to enjoy theater; either as a live, in-person production or in a Zoom digital format.

“As a gift to our patrons, we offer free of charge shows in two performance formats to accommodate these unusual times,” said Laura Fargotstein, Vienna Community Players. VTC is the resident non-profit performing arts company in Vienna. It has a nearly five decade long performance history. The Vienna Community Center follows public health and safety recommendations for social distancing and face coverings.

“In Living Sound” is original entertainment conceived by the Vienna Community Theatre. The production will allow audiences to enjoy radio style entertainment from three American classic radio series in one sitting. The series are of different genres including lighthearted comedy, detective and sci-fi drama. “In Living Sounds” will feature dramatized episodes from “Gunsmoke,” “X Minus One” and “Sam Spade.” The VTC shows will include theatrical costume pieces and live sound effects.

Fargotstein directs the “Gunsmoke” episode, “Chester’s Dilemma” first aired on Jan. 31, 1960. It is a warm, humorous celebration of human nature, set soon after the arrival of the railroad in the frontier town of Dodge City, Kansas, during the settlement of the American West in the late 19th century.

Tom Epps will direct the “X Minus One” episode titled “Mars is Heaven.” It first aired on radio on May 8, 1955. The drama is set in what was then the future time; 1987. Humanity has finally landed on Mars. But Mars is not exactly what the explorers were expecting, yet very familiar.

The “Sam Spade” series episode “The Blood Money Caper,” will be directed by Jessie Roberts. This radio drama was first aired on Sept. 29, 1946. It is a tale of the hard-boiled detective “Sam Spade.” The radio series was based on the character created by American writer Dashiell Hammett in his 1930 novel and later famous classic movie, “The Maltese Falcon.”

Vienna Community Players performing “In Living Sound,” a radio drama. Live performances at Vienna Community Center, 120 Cherry St. SE, Vienna. Friday evenings at 7 p.m. on Oct. 23, 24, and Saturday matinees on Oct. 30 and 31 at 2 p.m. Tickets are free of charge. Reservations requested. Seating capacity limited to 21 people. For live performances please arrive between 10-20 minutes early to allow for safe entry and seating arrangement. Performances will be about 90 minutes in length. There will be no concessions sold. Details at http://www.viennatheatrecompany.org/

Virtual live performances will be available online via Zoom on Saturday evenings, October 24 and 31 at 7 p.m. Link to Zoom virtual performance posted at 6 p.m. on day of performance or email “VTCshows@yahoo.com.” to receive email notification. Details at http://www.viennatheatrecompany.org/