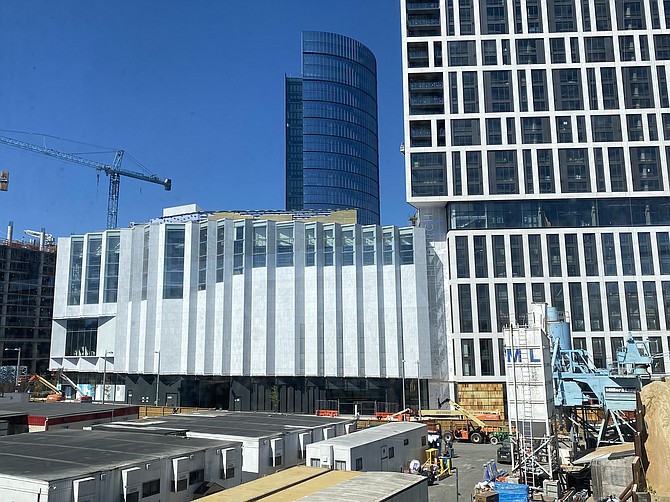 Office development in Tysons continues to play out. The question is, with the impact of COVID, will the spaces be utilized as to how the Comprehensive Plan envisioned them? Photo by Mercia Hobson. 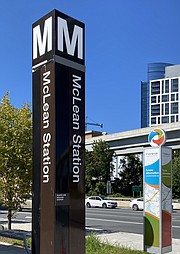 The Mclean Station: One of four rail stations in Tysons.

On Wednesday, Oct. 14, 2020, the McLean Citizens Association hosted a forum on Tysons – Ten Years After the New Comprehensive Plan. Rob Jackson, President of the McLean Citizens Association, welcomed Supervisors Dalia Palchik (D-Providence) and John Foust (D-Dranesville) to share their thoughts on Tysons, looking back, what was right now and what needed improvements. Jackson said that while the Dranesville District did not include any part of Tysons per se, Foust had been involved with the project for a long time. Palchik, on the other hand, brought "fresh eyes" to the topic.

FOUST said the Tysons Plan covered 2,100 acres of land in the "Tysons Corner urban center" and took advantage of the huge investment made in the Dulles rail project. "That includes four rail stations in Tysons. So, the Plan was intended to serve as a vehicle for creating a vibrant, transit-oriented, pedestrian-friendly, mixed-use community that provides significant transportation, environmental, housing, and other benefits,” he said.

While the Plan has a long horizon, 50 years, it was clear many of its goals were being realized currently. Foust said that Tysons had become an economic engine for Fairfax County, funding County services through tax dollars. He said, in 2013, there was approximately $10 billion of assessed value for non-residential real estate in Tysons. Yet, in 2020, seven years later, they had more than $15 billion of assessed value. Looking back during the Plan’s formative years-meetings with stakeholders, public workshops, sitting at tables in school cafeterias using Lego blocks to construct the vision of what Tysons should become, Foust said when the Board of Supervisors received approval for the Plan in 2010, it contained nearly everything he wanted, except the rail issue. "The decision had been made to elevate the rail through Tysons. So, the Plan, I felt, took that issue and recognized it, and worked with it, and presented a plan that was doable despite that," he said.

“The first ten years have been very positive, and I am very confident we are on the right track."

Foust said he remained concerned at the time that if Route 7 was not expanded, the Plan would not work. He held out his support of the Plan until such was included in the Comprehensive Plan for Tysons, a commitment to use funding associated with Tysons to widen Route 7. "As a result, we now have the project all the way out to Reston Avenue…checking off another issue associated with implementation of the Tysons Plan...The first ten years have been very positive, and I am very confident we are on the right track," Foust said.

PALCHIK Palchik stressed it was a long-term Plan; 40, 50, 60 years or more. “It’s ambitious and multi-generational...but we know it comes with growing pains and with a need for the continued focus on how we solve the problems," she said. Palchik noted that the pandemic hurt rail and bus transportation, but they were determined to get back to their previous rates. She said they had seen the buildout of the new grid for streets moving forward with the construction.

Palchik recognized the need for affordable housing for employees and all who come to live, work, and retire in Tysons. "As of last year, we had 752 units that were developed and another 4,200 approved units in place," she said. But that was something needed to be "tweaked." Those at the 100 percent to 120 percent average median income were too close to the market rate, and the effort of filling out the paperwork was not worth the difference. "We're looking at increasing the number of units that come 60 to 80 percent average median income and looking to eliminate those 100 to 120...We have the Tysons Housing Fund, which has more than $5M."

Q - Do you think the original goals for Tysons remain valid?

A - Palchik: "Overall, I think we've seen, really, a model of success for where we've come so far...I know Routes 123 and 7 are pretty sacred to VDOT and will be challenging to see any changes there, but some of our quieter streets, our smaller streets...maybe we can have a little bit more flexibility in how they look and how they're developed...And just looking at the small tweaks and areas where we can really focus on the immediate needs around housing, transportation, parks and green space.

A - Foust: "One issue that continues to bother me is the fact that we don't have a plan for delivering school facilities in Tysons yet. We have gotten commitment, though. We got a proffer for land for an elementary school...That's an issue that's going to heat up.

Another area that concerns me is recent. It is the unknown consequence of the COVID outbreak...We need office development for Tysons for the Plan to play out how we envisioned it...Those offices are still sitting pretty empty...We're going to have to be flexible. If the demand for office space is dramatically less in the future, we've got to come up with a modification to our Plan."

A - Foust said he wanted to focus on the Silver Line and that they were talking about reducing metro rail service across the system to 80 percent average of what it was before COVID. "They are saying that they don't have the funds to commence service on Phase 2 of the Silver Line. So that's a zero percent utilization of that facility, and my point is, it's not ready immediately, but it will be soon. And when it is, it has to be treated like all the other services across the Metrorail system. If they get 80 percent, we don't get zero because ... we weren't operating before COVID. That's not criteria that is relevant here. The criteria is we've invested $6 billion into the Silver Line... We approved so many projects transit-oriented that will function only if we have an operating Silver Line functioning properly. So that's, that's where I am most concerned in terms of the transit issues.