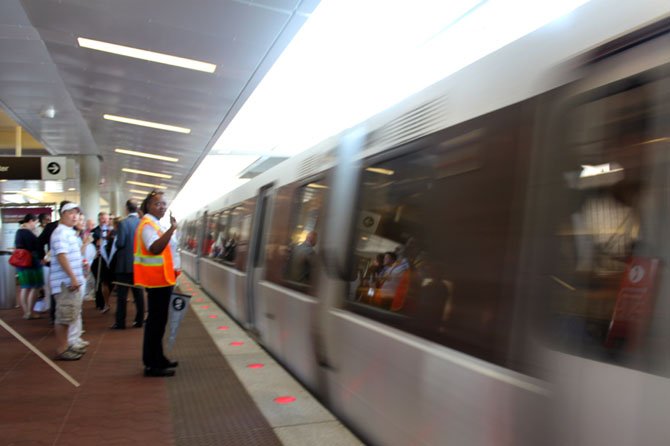 After the speeches, after the ribbon-cutting, there was a mad rush to board the first publicly open rail cars that rolled on the Silver Line heading towards Tysons Corner.

Those inside the eight new rail cars cheered. Those outside were visibly - and some vocally - disappointed.

After years of promises, history was being made. Local residents wanted to be a part of it.

Gov.Terry McAuliffe is interviewed by the media moments after stepping off the Silver Line rail car on the way to the extension’s grand opening Saturday.

THE SILVER LINE grand opening ceremony, attended by energetic local, state and national dignitaries, was held Saturday at the Wiehle-Reston East Station, a station that was only one part of the $2.9 billion project known as Phase I.

“The Silver Line is not just a transportation project,” said Fairfax County Board of Supervisors Chairman Sharon Bulova. “It’s a major transformative initiative.”

She and other officials, including Gov. Terry McAuliffe and U.S. Secretary of Transportation Anthony Foxx, rode the very first rail cars to the W-RE station before the ceremony.

“I just rode the car from Tysons,” said Gov. McAuliffe. “It was smooth, it was right on time, it was perfect and soon, we’ll all be on it.”

Several of the speakers following him commented on the governor’s energy about the project.

“Virginia, sir,” he said. “50 states. It’s only the Commonwealth that matters. Nowhere else are they doing what we’re doing today in Virginia.”

Laughing, he ordered that Phase II of the Silver Line would be completed the day before his term of office is over.

After Phase II is completed, WMATA does not expect there will be another major project until a new strategic plan is drawn up in 2025.

“We are committed to unlocking the region,” said Gov. McAuliffe. “That’s why we’ve been so involved with making sure this comes to fruition.”

Local, state and national officials at the ribbon-cutting ceremony for the Silver Line on Saturday.

U.S. Rep. Gerry Connolly (D-11) said the road to the Silver Line has not been easy, however.

“There were not many believers,” he said. “We were sued. Some of the people who sued us are in this room.”

A couple of people in the audience laughed and raised their hands.

“This is going to transform our corridor,” he said.

U.S. Secretary of Transportation Anthony Foxx spoke similarly. He likened the road to the Silver Line like building a cathedral during the medieval era. While the builders did not know what the cathedral would look like by the end, they finished their work.

“The work of transportation is really the work of generations,” he said. “Today is the day to celebrate the voice of yes being stronger than the voice of no.”

SUPERVISOR Catherine Hudgins (D-Hunter Mill) spoke as a WMATA board member and as a longtime resident of Reston.

“When many of us moved to Reston, we were told that rail was coming,” she said. “We didn’t think it would take 48 years to come.” She said that Reston’s motto of live, work and play will be taken beyond the town boundaries with the new Metro line.

“These five stations really make a game changer for the county,” she said.

But a ribbon cutting and a train ride is just the beginning, said Supervisor John Foust (D-Dranesville). Foust was not a speaker at the event, but also had the opportunity to ride the Metro line on the way to the event.

“This will really affect the quality of life and jobs here,” he said. “It will create the opportunity to develop new communities around the metro stops that will become vibrant places to live, to work and to play.”