Hadley Husisian has gathered over 9,000 pounds of food so far, as the demand for food assistance continues to soar. 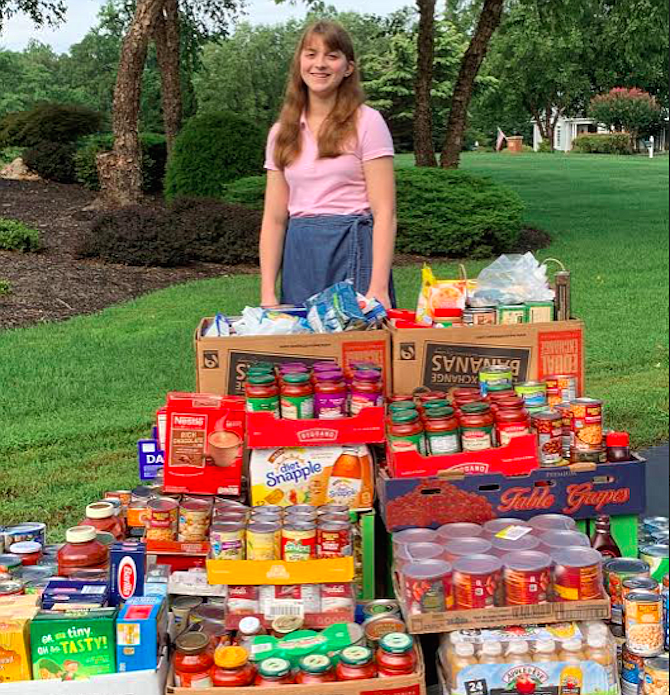 Hadley Husisian has raised over 9,000 pounds of donations for Fairfax food pantry Food for Others in Fairfax. Photo by Greg Husisian

As a competitive fencer, 17-year-old Hadley Husisian of Oakton is usually very busy during the school year. But once the pandemic hit and her usual activities were cancelled, she found herself wondering how to spend her newfound free time. Her answer came one day in the form of bananas.

“Someone in the neighborhood had accidentally purchased twenty bunches of bananas, instead of twenty bananas, so they had a lot extra, and didn’t know what to do with them,” she said. “So I thought, maybe it would be good for me to donate them. And then from there I thought, I could keep doing this with all the free time I had.”

And so she did. Husisian, a rising junior at The Potomac School in McLean, resolved to raise one ton of donations for Food for Others, a food pantry based in Fairfax. Five months and 9,000 pounds of donations later, Husisian has set a new goal: ten tons of food.

She started the food drive out of concern for the widespread financial hardship wrought by the pandemic.

“It’s just one of the most basic needs people have, especially during corona,” she said. “When people get laid off, it’s a lot more difficult for them to get food. So I thought it would be a good thing to do.”

HUSISIAN’S INITIATIVE comes as demand for food assistance is skyrocketing across Fairfax County. A recent report by the Capital Area Food Bank states that local food banks are seeing between 30 to 400 percent increases in demand. Another report, published in May by Feeding America, predicts that the food-insecure population within Virginia’s 10th Congressional District will double from 60,000 to 120,000 this year—the highest percent increase of any congressional district nationwide.

The demand at Food for Others, where Husisian is donating, has reflected this trend. According to Food for Others Communications Coordinator Bridget Snydstrup, the number of households that the pantry serves weekly has quadrupled since March. The majority of their 3,000 clients are using their services for the first time as a result of the pandemic.

According to Snydstrup, Hadley's fundraiser has become one of the largest food drives this year, and it came at a critical moment.

“Her initiative came at a time when Food for Others really needed the support, as the number of families utilizing our services had tripled,” Snydstrup wrote in an email to The Connection. “At the same time, panic shopping caused a huge drop in the food donations we were receiving from grocery stores and supply chain disruptions meant our usual food suppliers were not always able to fill our orders.”

Snydstrup added that a list of the food pantry’s most-needed items and donation drop-off instructions are available on their website.

Husisian’s collection process is contact-free: she leaves flyers on the doorsteps of homes across Fairfax County, encouraging prospective donors to email her at ton_of_food@zohomail.com to arrange a contactless pickup. Overall, her response rate from the flyers hovers at around 1-2 percent.

She said that while she has at times been disappointed by the low response rate and occasional pushback from some neighbors, she has been encouraged by the generous contributions and support of others.

“We’ve had some pushback from people who get angry, and come out of their house, and say ‘we’re not interested,’” she said. “But at the same time, I’ve had days where I’ve been sad about not having a lot of people contribute, but then I get a huge contribution, or someone brings me a really nice thank-you note. So, I’ve met some really great people, too.”