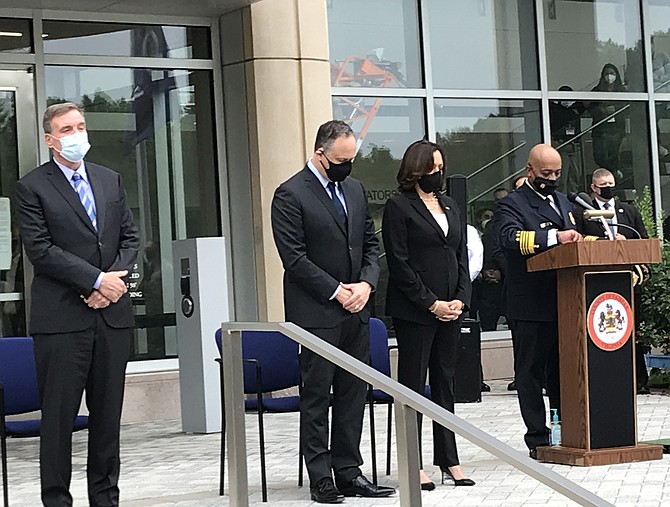 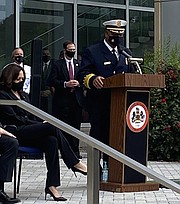 A moment of silence at the Fairfax 9-11 Remembrance Ceremony, exactly 10:28 a.m. September 11, 2020, marking nineteen years to the moment when the North Tower at the World Trade Center collapsed on September 11, 2001, following a terrorist attack.

"We have some esteemed guests but today is really about those who went into buildings and never came back knowing they might not come back. Those who went to work, to do their normal jobs and never came back." The ceremony began with a moment of silence at 10:28, when the North Tower at the World Trade Center collapsed. Sen. Warner said, "These last nineteen years, the commitment of those first responders, those who died in the tragedy, we still hold their memories and condolences to the families who still grieve. I know the Chief said there are six (first responders) still in current service who responded that day, and we can't thank you enough for what you've done."

In his introduction of United States Senator Kamala Harris, Sen. Warner said, "She understands the dangerous world that we live in, but she also understands the absolutely critical role first responders and our military play in keeping our country safe."

Sen. Harris recalled where she was and what she was doing nineteen years ago. It was early morning in California, then the images started to come on the TV, and everyone stopped. She said they all stood around in utter disbelief, strangers hugging each other, understanding at their core without reflection, without thinking that they were all in this together.

She said: "In times of despair, in times of suffering and pain, we find our very nature as who we are. We stand together, understanding we are all in this together. So, as we honor them, let's remember that today we honor those lost in New York, Pennsylvania, and right here in Virginia. We remember the passengers and crew members, the firefighters, law enforcement peace officers and military personnel. We remember that they were more than these victims of an unspeakable act. They were also parents and sons and daughters and neighbors and friends.

What our attackers failed to understand is that the darkness they hoped would envelop us on 9-11, instead summoned our most radiant and kind human instinct – the instinct to care for one another, to transcend our division, and see ourselves as fellow citizens. To race towards danger and risk everything to protect each other, the instinct to unite.

If we learned anything watching the heroes of 9-11 is that the strength of the human spirit knows no bounds. And that even the gravest threats against us only serve to reveal our true strength, and our capacity to act with love and courage in the face of immense challenge is what defines us as Americans.

I'm humbled to be here and to join in this moment. And I wish, and I pray that the cherished memories of those who served remind us of who they were as individuals, but also who we are as a nation."