‘Pretty Much Every Drug on the Street Is Counterfeit’
Votes

‘Pretty Much Every Drug on the Street Is Counterfeit’ 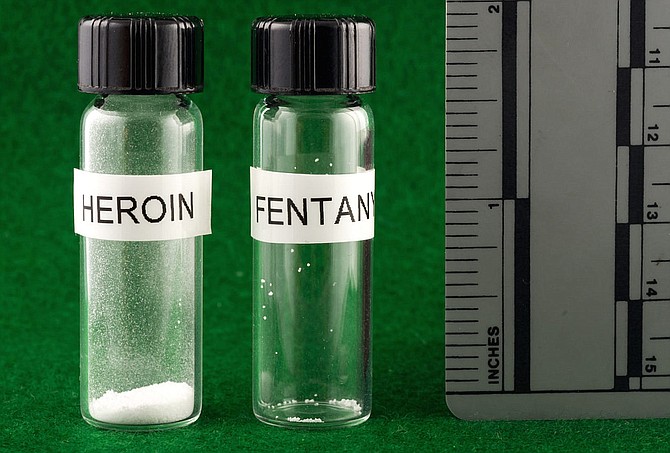 This photo illustrates why fentanyl is so deadly. The bottle on the left contains a lethal dose of heroin, about 30 milligrams. The one on the right contains just 3 milligrams of fentanyl – enough to kill an average-sized, adult male. Photo Courtesy of the New Hampshire State Police Forensic Lab

Fairfax County has a serious, undeniable, drug problem. And two county police detectives who see it firsthand, every day, recently shared their knowledge during an online meeting of the Sully District Police Station’s Citizens Advisory Committee.

Because of the rapid proliferation of opioid-related cases here, the Police Department established an Opioid Unit in 2018. Det. C. Ellis, on the force for almost 23 years, has worked in Patrol and in the Narcotics Division, and has been on this unit for a year.

“Fentanyl is 100 times more potent than morphine, and we think that’s why we’re seeing an increase in overdoses,” continued Ellis. “It’s also cheap to make; the majority comes from Mexico. And it’s so potent that the user doesn’t know how much to take, based on his or her tolerance. It shuts down the nervous system, and the person dies if no one’s around to monitor them.”

“We have four detectives on the Opioid Unit, and it can take eight hours to 300 hours to do an investigation,” said Ellis. “We’d love to have more detectives; we’re always working. On average, one case takes one detective 90 hours to complete – not including court time. We’re starting to bring charges against the dealers – and if a dealer causes a drug-related death and is convicted of it in the federal system, he could potentially receive 20 years in prison.

“Prosecution can be difficult, but we’re always trying to find some resolution for the victims and their families and take drugs out of the community. And we’d never be able to get the perpetrators without the hard work of the Opioid Unit, since it’s dedicated to arresting more of the opioid dealers.”

He also noted that most of the fatalities involve people 26-35 years old and said the large number of fatal overdoses here might possibly be “because Fairfax County people can afford to buy narcotics.”

Knowing how deadly drugs can be, said Ellis, “We ask people why they do it, and they say, ‘Because of the high.’ But after getting [their drug supply], the dealers will manipulate it so it’s less potent – and the users keep coming back for that high.”

Det. K. Reynolds has been a member of the Opioid Unit since August 2019. At that time, he said, “The heroin was cut with fentanyl, and people would go to [Washington] D.C. and Baltimore to get it. They’d buy gel caps filled with 3/10 of a gram of powder for $6-$8 and sell them in Fairfax County for $30-$100 per capsule. We had more of a user community then – but now, it’s flipped. “

“Last summer, we were overwhelmed with counterfeit, prescription medicine ordered through the Dark Web,” he continued. “Thirty milligrams of Oxycodone cost $1-$10/milligram off the Internet. It’s then sold for $30-$50 a pill. But pretty much everything [you can buy] on the street – including Xanax, Oxycodone and Percocet – are all counterfeit and are being cut with fentanyl – even heroin and molly [ecstasy].”

And not knowing what’s in the drugs they’re taking can often lead to tragic consequences for the users. For example, said Reynolds, “A 16-year-old boy from California recently ordered Xanax online from his home. But it was laced with fentanyl and he died.”

Calling the drug-dealing situation here a “dramatic flip,” Reynolds said, “It’s all localized in the counties, and it’s pretty much here to stay. It’s also starting at younger levels, with kids 15-16 years old. And lots of parents don’t know that their kids know about the Dark Web or are using it or Snapchat to get drugs.”

He said Fairfax County and the Fairfax-Falls Church Community Services Board have “bent over backwards to provide rehabilitation services to the community. But drugs are everywhere in the county.”

Reynolds then advised parents to get an “Informed Delivery” app to see what’s being delivered to their home. And, he added, “That’s the Achilles Heel of the Dark Web, because that’s how the drugs are ordered and delivered.”

FOR MORE HELP and information, see these resources: