It could be your son or daughter, dad or mom, your spouse. It could be the secret you. 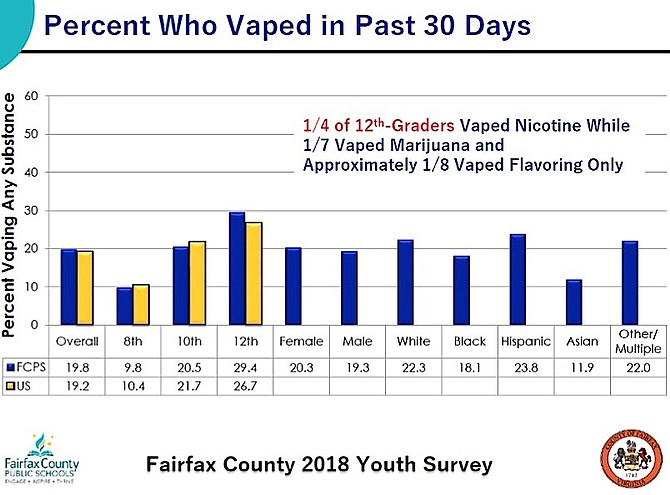 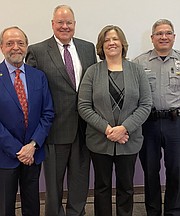 Percent of those who used painkillers without doctor's order in the past 30 days – Fairfax County 2018 Youth Survey.

(Click on "Download .JPG" to see large graphic.) Continued increase in fatal methamphetamine overdoses laced with fentanyl, heroin and or prescription opioids cause or contribute to death.

Part Two of the Series

The opioid epidemic and drug abuse continue in Virginia and Fairfax County. Drug craving combined with addiction stigma can prevent users from speaking up and accessing treatment – the first time, the second time, the third time. Drug overdoses happen. Some individuals who overdose on opioids can be revived with naloxone, a drug that counters an opioid overdose; others cannot. According to the Virginia Department of Health as of March 8, 2020, Drug Overdose Emergency Department Visits for Opioid in Fairfax County decreased slightly as reported in 2018 and 2019 Totals but January 2020 reports show an upwards trend.

Operation Drug Prevention panelist Barry Byer, M.D. serves on the Fairfax County Opioid and Drug Use Task Force. The County Board of Supervisors convened the task force in 2018 to address opioid misuse and disorders in Fairfax County. Byer recently retired after 40 years of medical practice in Falls Church, having served as a clinical professor of medicine at Georgetown and Chief of Family Practice at Virginia Medical Center for over three decades. As the second speaker at the public forum held in Great Falls, on Feb 29, Byer underpinned his remarks with sourced data and personal accounts. He described opioid/drug abuse, and target interventions, followed by treatment and drug storage/disposal means available in the County.

BYER initiated his remarks echoing those by Keynote Speaker, William Hazel, M.D. Byer said the euphoria of opioids takes control of users. "It's very different... It lasts a long time, and it's much more powerful... People that are under these drugs get this sense of well-being that transcends anything that you typically feel. This drug has a powerful effect on the brain. People that are addicted feel trapped... They are trapped by the pills that are inside the pill bottle. They can't imagine their lives without these substances," he said.

Byer said that it devastated him to see accidental overdoses happening to his patients. "I remember a 16-year old who was top of his class, fabulous student, all sorts of plans. Got addicted and never made it to college." Then there was the 35-year old attorney and mother of three children who died of an accidental overdose a few weeks after Byer saw her. She had been "in three or four residential programs," he said. Byer recalled the last time he saw her; she told him: "I finally got it. I'm not going to ever do this again." Byer said, "Can you imagine, [the] families... If any of you here have family, friends [or] acquaintances that have children or loved ones, people that have been hooked on these medications and have had these very negative outcomes, you see the devastation that it causes."

According to Byer, non-misusers are generally committed to doing well in school, motivated and concerned about the dangers and they have a good relationship with their parents who have stated “a strong disapproval of substance abuse." However, young people are vulnerable. They may have some or all the boxes checked and still be mis-users. "It doesn't mean you're 100 percent protected...Two-thirds [of users] got their first [pill] from a friend or relative," he said.

Byer described the strong effort required by family and friends to prevent drug use/abuse. "I didn't know what words to use, I would just say it takes a very robust effort, but the success rate is high... As a parent, as a grandparent, as a loved one, you have to really be proactive," he said. On the other hand, once a loved one or friend is addicted, it is a whole different level and very hard to get them separated. "As you move from early addiction to... residential programs, to end-stage where it's just worse, the success rate would go from good to moderate, to not so good," he said.

Byer provided specific risk management actions "the team," physician, pharmacist and individual, could take in their efforts to reduce addiction rates. For the physician, "The concept...not so long ago... was get ahead of the pain. Don't let the person experience pain, because if you do, it'll be much more difficult to get it under control...Start them on this powerful pain medicine, early. That's all very different, now... They will be told something like this: I'm going to give you enough for five or six days. After that, switch to ibuprofen. You'll be fine." In addition, in 2016, the Virginia General Assembly passed a law that authorized the Board of Medicine to require 2 hours of continuing education on controlled substances each biennium.

As for pharmacists, they too can educate as one in Great Falls did, Byer said. When the pharmacist received a prescription to fill for an opioid, Byer quoted the pharmacist: "You know, you can contact your doctor and see if there's something else he can give you that is not as addicting." Consumers also need to be proactive, according to Byer. They should ask the physician if there are non-narcotic options, list the side effects and explain how to get rid of the leftover prescriptions.

"Unused, leftover, outdated medicines in your medicine cabinets are like a time bomb waiting to go off. You have to get rid of them; they are a great temptation, an addiction risk. That is a huge problem...Drug disposal will reduce the risk," Byer said. He called attention to Fairfax County Government's Operation Medicine Cabinet Cleanout and its secure method of unused medication collection on given dates and at given District Police Stations, and the availability of secure prescription drug collection boxes at local pharmacies. Drug deactivation and disposal pouches Byer said offered at-home disposal solutions to get rid of opioids and other addictive and non-addictive substances. The pouches prevented still potent drugs from contaminating the water supply. "They don't expire and hold lots of medicine," Byer said. Byer displayed medication boxes and pill bottles with combination locks available for free at the Fairfax-Falls Church Community Services Board, 12011 Government Center Pkwy, Fairfax.

"As a caregiver, learn the facts, understand how the medicines work, be proactive and then be in conversation with your loved ones and your health care providers. Monitor and secure your medications and dispose of them safely," he said.

PANELIST Kelly Rankin is a Fairfax County Public Schools Substance Abuse Prevention Specialist, hired for the Langley, McLean and Justice Pyramids. According to Rankin, data drove Fairfax County Public Schools Substance Abuse education programs and intervention models. In her presentation, Rankin referenced a Fairfax County 2018 Youth Survey that showed, overall, only 5.2 percent of eighth, 10th, and 12th-grade students used painkillers or prescription medications in the past 30 days without a doctor's order. "You think that opioids are not really an issue in our schools. When I see it, I know some kids are trying opioids in our schools," Rankin said.

Other substances such as marijuana, alcohol and vaping were worrisome, said Rankin as she viewed the Fairfax County 2018 Youth Survey. According to Rankin, Fairfax County Public Schools vaping rates were higher overall than the national average, 19.8 percent vs. 19.2 percent. "What I see with vaping and with nicotine is, it hits the same receptors in the brain that opioid does as far as how much dopamine it releases. So it's just as hard to quit nicotine as it is for an opiate addict, to get off of heroin," Rankin said. She discussed how middle school students who vape at school were not being defiant but vape at school because they could not make it through the day without the nicotine. "I work with the parents and their pediatrician on how we're going to get them [the student] off of nicotine," she said.

Rankin compared Fairfax County Fatal Overdose Data for 2018: total 1103 deaths vs. 2017: total 1351. She noted the downward trend. "One of the things that we're doing in Fairfax County now is working with the attendance officers. Why isn't this kid in school? Let's reach out to the parents – is there a drug issue at home... Let's try.... catching [it at] the beginning," she said.

Response by Fairfax County Public Schools (FCPS) increased in 2018-2019 when Fairfax Opioid Task Force provided funds for FCPS to hire 6 Substance Abuse Prevention Specialists (SAPs) to support pyramids, according to Rankin. In addition, in 2019–2020, the School Board approved funding for an additional 11 SAPs to be hired and support school pyramids, and in 2020–2021, there is a goal of acquiring additional funding to hire enough SAPs, so each school pyramid has their own specialist.

Rankin described the County’s multi-tiered alcohol and other drug intervention program. She said after a student gets in trouble at school for substance abuse, a CRAFT assessment is performed. The student is asked if they use in the car, to relax, alone, for fun, and if they have gotten into trouble before. If the student scores high on the assessment, a referral is made to Fairfax County Coordinated Services Planning, where they have a 10-week program that is for adolescent substance prevention. She stressed follow-up actions were very important throughout the support program.

Finally, Rankin shared six tips on what parents can do: "Communicate early and often. Do not save medications. Network with other families. Monitor your child's spending; some students have separate Uber accounts. Monitor Internet. YouTube has everything."

Panelist, PFC Mario F. Colorado, Crime Prevention, Fairfax County Police Department, provided statistics by County districts, which concurred with data presented by other panelists. Colorado said that they have four detectives dedicated to investigating opioid cases, with 47 current active investigations underway. "These detectives are assigned to investigate those deaths...They're doing what they can to bring those to justice involved in the sale of this stuff," he said. Colorado said that other narcotic detectives do the undercover work. “They go get the search warrants, and then they go after these guys. They go as far away as Baltimore all down... 81, they'll go wherever they need to bring justice," said Colorado.

Fatal Overdoses on the Rise

According to the Virginia Department of Health (VDH) Office of the Chief Medical Examiner Fatal Drug Overdose Quarterly Report for 3rd quarter 2019, publication date: Jan. 2020: “Fatal drug overdose has been the leading method of unnatural death in Virginia since 2013… There has not been a significant increase or decrease in fatal prescription (Rx) opioid overdoses over the 12-year time span (2007-2019)…Fatal non-opioid illicit drug overdoses are on the rise. In 2018 compared to 2017, fatal cocaine overdoses increased 11.8 percent (446 compared to 399 respectively) and fatal methamphetamine overdoses increased 44.3 percent (127 compared to 88).”

The Office of the Chief Medical Examiner is predicting the number of fatal methamphetamine overdoses for 2019 at 170, the deadliest year yet. In 2018, fatal methamphetamine overdoses most frequently had fentanyl, heroin and/or one of more prescription opioids causing or contributing death. In 2018, over 65 percent of cocaine deaths also included fentanyl. Final reports by VDH are anticipated to be released in April.