There’s More Than Meets the Eye at Traffic Signal Intersections

This technology dates back to an invention by the son of a former slave. 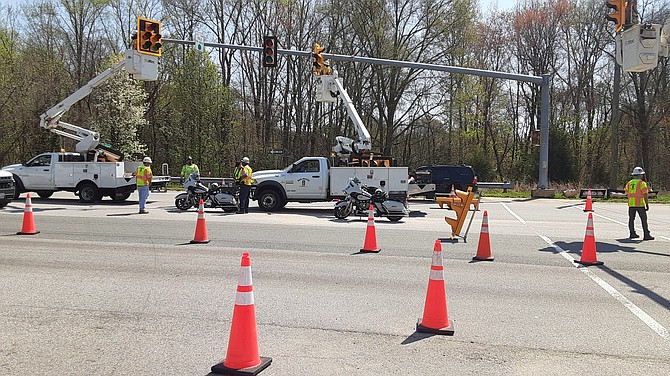 At Telegraph Road and Newington Road, VDOT is updating the traffic lights. Photo by Mike Salmon.

At the intersection of Telegraph and Newington Roads in the Mount Vernon District, the traffic signal crews were out in early April, upgrading the visibility of the lights, replacing signal heads and backplates in accordance with a Federal Highways initiative to update their Manual on Uniform Traffic Control Devices for Streets and Highways. The MUTCD defines the standards used by road managers nationwide to install and maintain traffic control devices on all public streets, highways, bikeways, and private roads open to public travel, the FHWA said. 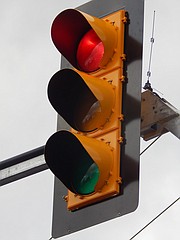 The light technology is growing.

According to the FHWA, backplates added to a traffic signal indication improve the visibility of the illuminated face of the signal by introducing a controlled-contrast background. The improved visibility of a signal head with a backplate is made even more conspicuous by framing it with a retroreflective border. Signal heads that have backplates equipped with retroreflective borders are more visible and conspicuous in both daytime and nighttime conditions, the FHWA said. To simplify it, the driver and pedestrians can see these lights better, and this is what was going on at the signal at Telegraph and Newington Roads.

This signal in the southern part of Fairfax County is one of 1,516 signals the Virginia Department of Transportation’s Northern Virginia office is responsible for, which is broken down into 918 signals in Fairfax County, 344 in Prince William County, and 254 in Loudoun County. This number does not include Rapid Flashing Pedestrian Beacons, mid-block pedestrian intersections, flashers, and sign warning flashers VDOT Northern Virginia District also maintains.

The VDOT Signal Maintenance office has a staff of 15 people working on the traffic signal program, but that does not include Traffic Engineering, Permits, or contractor staff that deal with larger emergencies such as signals being knocked down, re-wiring, etc. The budget is $9.71 million. The traffic signal budget includes utilities, ancillary repairs, parts and equipment, labor, vehicles, maintenance contractors, and life cycle replacement, said Ellen Kamilakis, a Senior Public Affairs Officer at VDOT Northern Virginia District.

Each traffic signal light has a life cycle of about 15 years until it needs to be serviced or replaced. The lights are out there in the elements, and bounce around in high winds, rain or ice, so these fixtures have to be durable.

The actual bulbs are LED-based lamps. They are warrantied for seven years but have an average of about a 10-year life cycle. Amber indications. i.e, the “yellow light,” has a longer life cycle as they are not on as long as red and green lamps.

Sitting at the Light

No doubt drivers in this area have spent considerable time sitting at the traffic light, but this is not new. The first traffic signal was installed in London in 1868. Fast forward 55 years when the U.S. Patent Office granted Patent No. 1,475,074 to 46-year-old inventor and newspaperman Garrett Morgan for his three-position traffic signal, the History Channel website said.

Morgan, the son of former slaves in Kentucky, started a Black newspaper in 1920 called the “Cleveland Call.” Morgan saved enough to buy a car. He had to share the crowded Cleveland streets with bicycles, horse-drawn delivery wagons, streetcars and pedestrians and navigate the intersections which had manually-operated traffic signals.

These signals only had red and green, but no interval for reaction time, so this led to many accidents, giving Morgan an idea to design an automated signal with an interim “warning” position—the ancestor of today’s yellow light—so drivers would have time to clear the intersection before crossing traffic entered it, the History Channel website said.

Morgan sold the rights to his invention to General Electric for $40,000, and the rest is history.