Cappies Review: 14 Scenes of ‘Growing Up’ 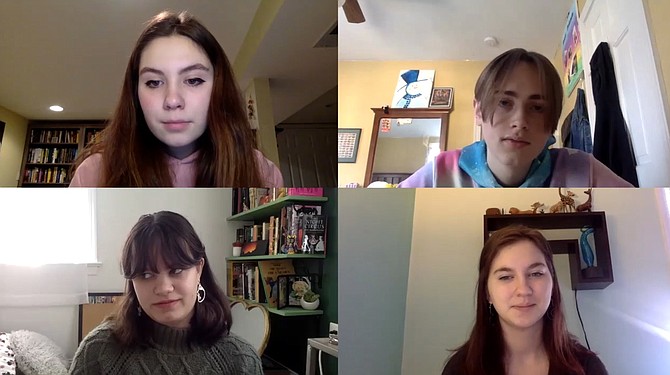 "Am I a person? Can I survive?" These are the introspective questions every developing high school student asks themselves at some point in their lives. These questions are addressed through 14 skits in Wakefield High School's original production titled "Growing Up."

"Growing Up" was written by Wakefield High School students, who brainstormed ideas for a Zoom show after the summer of 2020, when they were isolated due to the COVID-19 pandemic. The play followed the journey of several high school students reflecting on the end of childhood and preparing for their lives after high school. This piece takes an unique approach on the well-known narrative of growing up.

The 14 scenes in "Growing Up" were separated from one another in terms of plot. However, the play had a well-developed message of moving towards your future while also keeping in touch with your past. Containing humor in scenes such as "And I Think to Myself..." written by Melena Meek, heated anger in "Mending the Bonds" written by Ryan Peterson, and bittersweet sadness in "Un-Fair Folk" also written by Melena Meek, the actors embodied the wide range of emotions that come with growing up and moving on.

Despite performing on a virtual platform, the cast portrayed their characters authentically, and connected well with other cast members. One notable instance of excellent connection between actors was in "And I Think to Myself..." by Melena Meek, where Jonathan Stewart, The Younger, and Malachi Jimenez-Washington, The Elder, discovered they were the same character at different ages. The Elder provided The Younger with advice regarding the future, reminding him the world is a beautiful place, even during rough moments. In turn, The Younger reminded the Elder to hold onto the whimsical parts of childhood, even asking him to click his heels together like Dorothy from The Wizard of Oz. Stewart and Washington crafted a genuine relationship by matching each other's tone and expression, which not only heightened their stage chemistry but also made the audience feel as though they were in the room with them.

Also of note was Melena Meek, who played a high school student yearning for her childhood in "Un-Fair Folk." In the piece, Meek thanked and said goodbye to the fairytales she indulged in as a child. She felt protected by fairies and other mythical creatures, and left little houses outdoors for them to live in. She wanted to live in her fairytale world forever but understood she must let go and become an adult. Giving a dynamic performance, Meek embodied her character fully. This approach allowed the audience to relate to her story of missing her youth. Meek's use of emotion was incredibly poignant and drew light to the importance of saying goodbye.

The technical elements of the show added a sense of realism to the overall piece. Scene transitions were flawless and allowed the audience to remain focused on the heartfelt production. Additionally, the use of a homemade time capsule in the scene "Lunch Box Club" was endearingly charming and gave life to the virtual production.

At the conclusion, the entire cast appeared on the screen, and answered the questions asked at the beginning of the piece: "People survive, and I am a person." This final message assured the audience that while growing up is difficult, it is a task that can be overcome by remembering the hope of our childhood.

This production may be viewed at: https://www.youtube.com/watch?v=-z9R7Yb3cHc