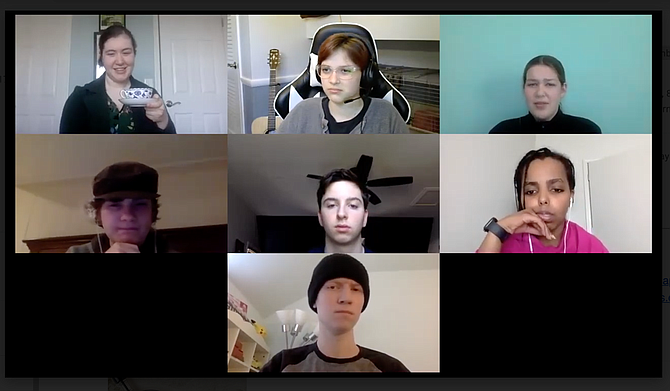 In a first-class train car traveling through England, how long will it take an eclectic group of passengers to find the mysterious murderer of Brutaldeath? The Brutal Death of Brutaldeath at Wakefield High School uncovers this and more with a story full of absurdities.

The Brutal Death of Brutaldeath is a comedic murder mystery set on a train in London that follows a group of passengers as they piece together the mystery of Brutaldeath's murder. With the title character narrating the mystery as it unfolds, the suspects each offer their alibis and accusations before finally discovering the true killer. The unique group of passengers each represents your traditional murder mystery stereotypes – the pretentious Brit, the brash Southerner, and the pensive Detective waiting like a lion for the right piece of evidence to be revealed.

The original script of The Brutal Death of Brutaldeath was written by Wakefield High School's Theatre Arts II class, with each actor writing their own lines. Inspired by the movie The Murder on the Orient Express, the play follows a classic whodunit style that places suspicion on each character with captivating suspense. In addition to student playwrights, the production was also produced by student editors and graphic designers to create a polished piece that takes advantage of the new opportunities offered by virtual theatre.

As Elizabeth Jane Vain, Penelope Wagner was a stereotypically elitist Brit with a quick sharpness to her line delivery, allowing each joke to land with ease. With an amplified but not overdone posh British accent, Wagner embraced the character's composed yet accusatory air to contrast her fellow castmates in their engaging interactions.

Rain Varela was a sly inquisitor as Brutaldeath, utilizing her character's ability as the narrator to pause the story and interject with a swift joke or key plot point. With an energized and incessant physicality, Varela clearly showed Brutaldeath's frustration with her inability to speak directly to the passengers as they discovered her murderer at a painfully prolonged speed.

No streamed production is complete without an excellent editor. Abby Berner was the student editor, choosing music and editing scenes together in a way that supported the story and made sure every second was utilized. As the graphic designer for the production, Penelope Wagner created title cards shown between scenes that immediately set the time and place, as well as adding to the mysterious mood.

Despite the challenges of virtual theatre, the cast and crew of The Brutal Death of Brutaldeath at Wakefield High School were able to share a charming story packed with humor and heart.