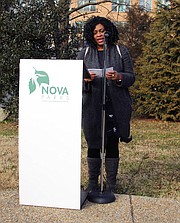 America has a troubled history with justice and racism. The regional parks of Northern Virginia help to tell these stories, from Colonial time to the modern day.

In many ways, the history of Northern Virginia is the history of America. It is complicated and has many facets. February is Black History Month and a good time to consider the many stories that our historic places have to share. Here are a few of the Black history stories told through your regional parks.

In 1751, John Carlyle, a wealthy merchant from Scotland, and his wife Sarah Fairfax Carlyle started construction on the largest house in Alexandria. The big house and lavish lifestyle they had was made possible by enslaved people. Many people have called the slave economy "America's original sin."

Twenty years ago, NOVA Parks developed an interpretive video to help tell the slave story that underpins the Carlyle House. And in the last few years, the Carlyle House has hosted genealogy programs that help people discover if their ancestors were enslaved people at this colonial site. Lt. Governor Justin Fairfax discovered his ancestry to the Fairfax family slaves from Maddy McCoy, who leads the 'Breaking Down the Walls of Slavery at the Carlyle House' programs.

In 1854, a young man named Daniel Dangerfield, who had worked at Aldie Mill in Loudoun County, escaped to freedom in Philadelphia. Someone from Virginia spotted him on the streets of Philadelphia, and there was a trial to see if he should be returned to slavery. He won that case, but it was close. He later moved to Canada to be free from the Fugitive Slave Act. The Civil War's primary reason was that increasingly, northern states were not enforcing the Fugitive Slave Act, as can be seen in the Dangerfield trial. A new interpretive sign telling this story has been installed at Aldie Mill.

In 1889, a fourteen-year-old named Orion Anderson was jailed in Leesburg for chasing a neighbor girl. The Ku Klux Klan took him from the jail and lynched him a few blocks away at a railroad station on land that is today on the W&OD Trail. In the summer of 2019, a moving dedication of the sign that tells this tragic story took place.

In 1915, a group of civic leaders gathered at a house in Falls Church to organize in opposition to a proposed law that would have required Black residents to sell their property and move. The proposed law was what they called a "sunset law" where no one of color could legally be in the town after sunset. The house where they organized was in a Black community called Tinner Hill. Those brave individuals were successful in opposing the proposed sunset law, and that group became the first chapter of the NAACP outside of a major city. In 2015 NOVA Parks partnered with the City of Falls Church, Fairfax County, and the Tinner Hill Heritage Foundation and opened a small park on that site. On Martin Luther King Day this year, NOVA Parks hosted an event at Tinner Hill to unveil new interpretive signs that tell this story.

In 1959, the Northern Virginia Regional Park Authority (NOVA Parks) was established. One of the reasons the local governments in our area chose to create the first regional park authority in Virginia was the State Park System at the time was segregated. Essentially, NOVA Parks was an integrated state park system for the region.

In 1969, NOVA Parks opened the largest pool in Virginia to all people, at Bull Run Regional Park. The same year the public pool in Leesburg was being closed instead of integrating. None of the facilities built by NOVA Parks in the often segregated decades of the 1950s and 1960s were ever segregated.

In 2020, after the killing of George Floyd and Breonna Taylor, Black Lives Matter marches sprung up all over the country. At Algonkian Regional Park, over 2,000 people organized by high school student Ocean Akinotcho came to express their frustration and lack of justice in a peaceful and somber march.

America has a troubled history with justice and racism. The regional parks of Northern Virginia help to tell these stories, from Colonial time to the modern-day. Part of growing as a society is acknowledging our past and learning from it. Black History Month is a time to focus on these important stories.