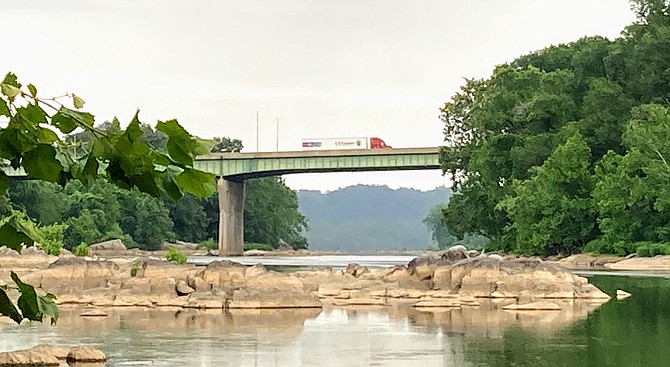 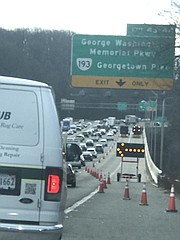 If work begins soon on the American Legion Bridge, it could begin years of congestion caused by construction.

Last Friday, Jan. 8, 2021, the State Highway Administration released names of three bidders to do preliminary work necessary before building $11-billion toll lanes. The effort will already cost approximately $1 million, since losing bidders will be awarded up to $500,000, according to page 180 of the Request for Proposals.

The project to add four toll lanes to the American Legion Bridge, around the Beltway and up 270 has not yet been approved, and faces opposition and many unanswered questions.

The SHA issued its final Request for Proposals on Dec. 18, 2020, asked for proposals to be submitted by Dec. 23, and only released its timeline to the public two days before Christmas, at the close of business.

“They tried to slip this thing through in the dark,” said Del. Marc Korman, speaking at a meeting of CABE, Citizens Against Beltway Expansion last Thursday, Jan. 7.

This is after hundreds of people testified against the P-3 program this summer; declining traffic during the pandemic showed how effective taking a percentage of drivers off the road during rush hour can be to mitigate congestion; and the Purple Line fiasco.

The Request for Proposals (RFP) “marked another important milestone toward achieving Governor Larry Hogan’s vision for transformative traffic relief in the National Capital Region by addressing some of the nation’s worst traffic congestion and the chokepoint at the American Legion Bridge,” according to the State Highway Administration.

“They are in Governor Hogan-legacy mode right now,” said Korman.

“On a parallel track, the I-495 & I-270 Managed Lanes Study will progress with MDOT expected to announce a Recommended Preferred Alternative in the coming months with the study's federal Final Environmental Impact Statement and Record of Decision issued by Fall 2021,” according to the State Highway Administration.

Rep. Kumar Barve says he, Korman and Solomon will have to call “an audible on game day” to determine strategy and how to proceed. Last year, bills that could have created new oversight on Public Private Partnerships passed the House but didn’t receive a vote in the Senate.

“I could pop out 50 Billis in the General Assembly and the result will be the exact same unless we change leadership in the Senate,” said Barve.

“We will have to figure out if we have more allies in the Senate,” said Solomon.

Sen. Susan Lee (D-16) also attended CABE’s meeting last Thursday. And while the project isn’t a sure-thing to reduce congestion, she said it will “cause decades of harm to the environment and quality of life.”

And with the pandemic and the resulting grief and economic pain to Maryland businesses and people, the General Assembly just finished its most difficult session, said Lee.

“There’s no reason to rush this,” said Korman.

“If this is such a wise project, there’s no reason why we can’t wait,” he said.