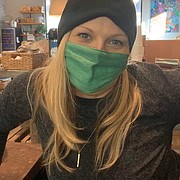 Sometimes, the time is right even when it doesn’t seem like the time is right at all. That’s ultimately how Stomping Ground owner Nicole Jones found herself walking with a landlord through the old Society Fair space at 277 S. Washington Street a few months back, knowing in her heart that the location was perfect.

This knowledge was a marked departure from Jones’ sentiments in the early spring, as the covid-19 pandemic rained punch after punch down on the restaurant industry and Jones’ team at Stomping Ground and Bagel Uprising. In a flash, the eatery was forced to pivot from its normal sit-down fare to a pickup window, making menu adjustments along the way. And on an even more serious note, four of Jones’ teammates lost family members to the virus early on in the pandemic.

“In the start of covid in March and April, I was ready to never do another restaurant again,” she said. “It’s taken a huge emotional toll on all of us.”

But time marched on, and with it Jones and her team did too. And when Jones got word of co-working space ALX Community taking up residence on Washington Street, as well as the 6,000-square-foot restaurant space that was virtually turnkey just waiting for a new tenant, her curiosity got the better of her.

While walking through the restaurant space, “I was like, oh, no,” Jones laughed. “I want to do this.”

And with that, Mae’s Market and Café was born.

Now, Mae’s, which is slated to open by early March, is not going to be Stomping Ground Part 2, or an offshoot of Bagel Uprising. No, instead Mae’s is bringing in its own flair, its own identity.

“It’s not a huge diversion from Society Fair, which was there before,” Jones said. “I like to say (it’s like) a Dean and DeLuca, but by a neighborhood person.”

With that will come a sandwich counter, a salad counter, many takeaway options and some high-quality meats and cheeses. Meats will be brought in by small local farms.

“It’s a market in the most original sense of the word,” Jones said.

“You’ll see it grow over the next year, and the idea is it will culminate with the opening of the restaurant inside the market.” Jones’ plan is that in a year’s time, Mae’s will have a sister: Virginia’s Darling, a wine bar.

And Stomping Ground faithful, take heart: There will be biscuits.

“We will have biscuits as an option!” Jones said. For instance, diners can pick up a buttermilk biscuit with sausage and concord grape jam for breakfast: A hearty start to a new day.

Jones says she hopes the hard work the team will put into Mae’s over the next year will result in something refreshing for Alexandria as the city navigates its way through the next stages of the pandemic and beyond.

“I don’t want us just to survive; I want us to flourish when this is all said and done,” she said.