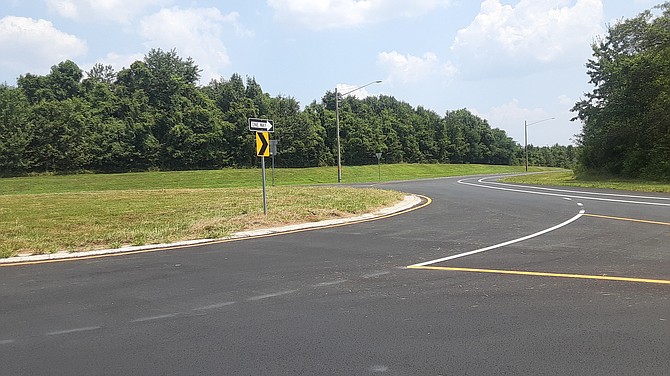 Near this traffic circle in Lorton, the body was found in a wooded area. Photo by Mike Salmon.

The person of interest is in custody after detectives found the body of Emily Lu, a Lorton resident who died recently. On the evening of Friday, July 23, detectives received information that Ms. Lu may be in the area of Dudley Drive and Laurel Crest Drive in Lorton. Detectives responded to that area and located Ms. Lu in the woods near the traffic circle. Sadly, she was deceased. The Office of the Chief Medical Examiner will conduct an 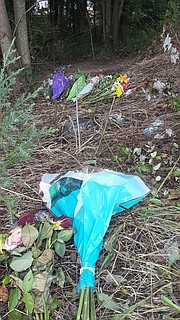 A makeshift memorial at the spot in Lorton where the body was found.

autopsy to determine the manner and cause of death, the Fairfax County Police said.

Brian George Sayrs Jr., 25, of Woodbridge, was charged with second degree murder and felony concealment of a body. He is being held at the Adult Detention Center without bond. Sayrs Jr. was a tenant at Ms. Lu’s home at the time of her disappearance, police said.

In early June, detectives from the Fairfax County Police Department Major Crimes Bureau initially investigated the disappearance of seventy-two-year-old Emily Lu. Officers responded to Lu’s home in the 9200 block of Davis Lane in Lorton on Friday, June 4 at 2:26 p.m. after her employer requested a welfare check when she did not show up for work. Lu’s car was discovered in the driveway with groceries recently purchased from a nearby store. Officers checked the home and spoke with neighbors but were unable to find her. A family member contacted officers that afternoon and provided an address in Belle Haven that Lu frequents. Officers checked the home but did not find her.

While searching Lu’s home, detectives uncovered evidence suggesting she may have been harmed inside. Based on these preliminary investigative findings, her absence from work and the unusual lack of response to family members, detectives believe she was missing under suspicious circumstances.

Further investigation revealed Lu was last seen at the Aldi, 1329 Gordon Plaza in Woodbridge, around 7:52 p.m. on Jun 3. Lu arrived home but never took all of her groceries inside.

This is being investigated as the 13th homicide year to date in Fairfax County.

Victim specialists from Major Crimes Bureau’s Victim Services Division have been assigned to ensure that the victim’s family is receiving appropriate resources and assistance.

Detectives continue to investigate to determine the circumstances surrounding Ms. Lu’s death. Anyone with information about this case is asked to call Major Crimes Bureau at 703-246-7800, option 2. Tips can also be submitted anonymously through Crime Solvers by phone – 1-866-411-TIPS (866-411-8477), by text – Type “FCCS” plus tip to 847411, and by web –Click HERE. Download our Mobile tip411 App “Fairfax Co Crime Solvers”. Anonymous tipsters are eligible for cash rewards of $100 to $1,000 dollars if their information leads to an arrest.