After the fire in 2019, a new, brighter space welcomes the old gang. 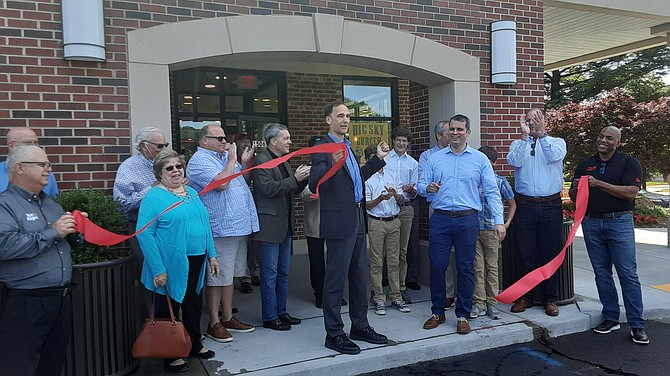 The ribbon at Roy Rogers in the Belle View Shopping Center was cut, welcoming a neighborhood gathering place back after a fire in 2019. Photo by Mike Salmon.

The coffee drinkers and neighborhood discussion gurus now have their old place back in the form of the Belle View Roy Rogers, which recently reopened after a shopping center fire in October 2019. The store had to be completely gutted, and the interior rebuilt, but the new Roy’s is brighter and more modern, with large windows and a new lighting system.

“We’re glad to be back,” said Jason Hunt, who is the co-owner with his brother Stuart. “We’re looking forward to being the community space like 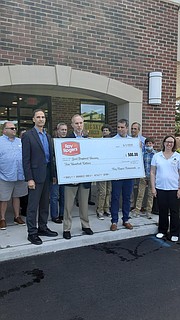 A donation of $500 was made to Good Shepherd Housing.

we did before,” he added. “We’re glad to see the regulars back.”

The 2019 fire started in one of the spaces on the eastern end of the shopping center where the Roy Rogers is located. All the places down on that end of the shopping center closed, but many reopened in the months following the fire, except the Roy Rogers which had extensive smoke damage. Hunt summed it up as “delays and challenges,” as to why it took so long, but others noted the time too.

“A year and a half is a long time,” said Supervisor Dan Storck (D-Mount Vernon) who was all smiles on ribbon cutting day on Tuesday, June 1. “It’s so much airier,” he said, pointing at the large windows. “That’s huge, the product was worth the time,” he said. The insurance claim process was part of the delay.

Others agreed. “It was missed,” said Fawn Katzbahn who’s been coming to the center for the past 25 years.

Burl Downs just started his job at Spokes Bicycles next door, and had a cup of coffee in hand. “People were asking ‘when’s it going to be open?’” he said.

In the same shopping center, there is a free-standing bank building across the way, and it was offered to Roy Rogers but moving into that space would have taken more work and time then the management wanted before opening. This Roy Rogers is a member of the Lee-Mount Vernon Chamber of Commerce.

Supervisor Dan Storck, Lee-Mount Vernon Chamber's Holly Dougherty and owner Jason Hunt were delighted by the results of the rebuild.

Although it actually opened in late May, the line-up out front to cut the ribbon happened on June 1, along with the donation of $500 to Good Shepherd Housing, a local non profit that helps lower income families in Mount Vernon. After the ribbon was cut, the oversized check was given to David Levine, the executive director at Good Shepherd. “This is the kind of support we need for our mission,” Levine said.

The corporate Roy Rogers office is in Frederick, Maryland and corporate officials were there for the opening too.

As the red ribbon fluttered to the ground, food was on many minds. “We’re ready for some burgers and chicken,” said Storck.