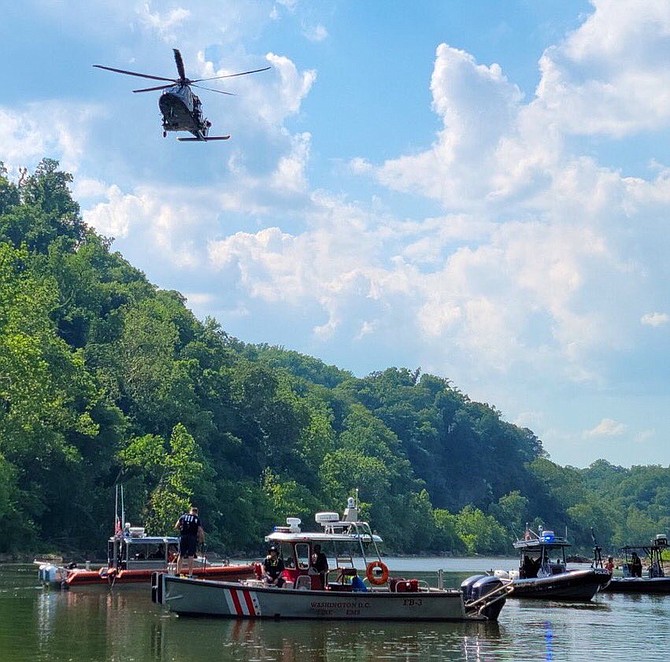 D.C. Fire and Rescue June 6: @dcfireems ... apparent drowning near Fletcher's Boathouse is 2nd recent loss of life of people trying to swim the Potomac. The other was nearby in @MontgomeryCoMD (by Scotts Run, McLean, Va.). The river around and north of Fletchers is beautiful, scenic, but DANGEROUS! Don’t put your life at risk. 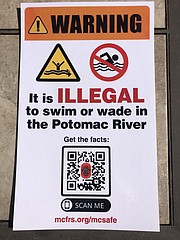 Detectives from the Montgomery County Police Major Crimes Division are investigating a drowning in the Potomac River that occurred on May 31.

On Monday, May 31, at approximately 8 p.m., 2nd District officers along with Montgomery County Fire and Rescue personnel responded for the possible drowning of an adult male in the Potomac River near Scott’s Run.

Witnesses told investigators that the victim, identified as Franky Smith Gonzales Sapaico, age 26, of Springfield, Va., was swimming in the river in the area of Scott’s Run when he went underwater and never resurfaced. Montgomery County Police - Managed Search and Operations Team (MSOT) officers along with Montgomery County Fire and Rescue personnel searched for Sapaico that evening but could not locate the victim.

Search operations continued until the evening of June 3.

At approximately 5 p.m., Friday, June 4, family members, who were also searching for Sapaico, located his body in the water near Scott’s Run.

MCP along with Montgomery County Fire Rescue personnel responded to the Potomac River near Scott’s Run and recovered the victim.

This death was followed by an apparent drowning near Fletcher's Boathouse, the 2nd recent loss of life of people trying to swim the Potomac.

(The other was nearby in @MontgomeryCoMD by Scotts Run, McLean, Va.) “The river around and north of Fletchers is beautiful, scenic, but DANGEROUS! Don’t put your life at risk.”

D.C. rescue reported five calls partway through the day on June 6. “There is an increase in recreational use along our waterways, and it is reflected in increased responses.”

“Fireboats had 5 calls so far this shift, which is far from over. In addition to the falcon rescue & search near Fletcher's Boathouse, they assisted an injured jet skier, a vessel taking on water, and extinguished an outside fire on the Virginia shoreline near Fletchers.”

Potomac River: What You Know Could Save Your Life

The Fire Chief's annual Potomac River Safety Campaign kicked off this Memorial Day and MCFRS is asking residents to observe the warnings, come prepared and be safe. There is a lot to learn from Captain Bell with the MCFRS Water Rescue Team:

"The Potomac is very deceptive, it has some spots that look very calm, very tranquil, look very easy to swim in. But, because the river is a very high-volume flowing river there is a very strong undercurrent with lots of rocks, lots of unseen obstacles and the water is never clear, so you can never see what you’re getting into. These dynamics are especially pronounced in the area of the river called the Potomac Gorge. It is a turbulent zone where water comes into conflict with geology. This stutter-step in the earth’s crust makes Great Falls a beautiful spot, it also makes it dangerous."

It’s important to keep in mind that the falls are only a piece of a complicated section of river spanning about seven miles. Uprooted trees, debris, hidden boulders and other hazards create a situation so dangerous for swimming that wading and swimming is illegal in many places.

The river is moving fast and there are a lot of hazards that you can get pinned up against, get your feet trapped in,” says Bell. “And the trees, they create what we call a strainer effect where, if you get swept into them, you can very easily get caught and trapped by your body.” Even wading into the river can lead to a dangerous situation. Mud and silt and pollutants make it impossible to see more than a few inches below the water’s surface. The river’s bottom is too often underestimated.

“I feel like I’m safe because I have my footing and I step into an eddy or something and I’m relatively safe there, but then as soon as I take one step to the rear of where I’m at it’ll drop from a four to five foot to a 20 to 30 foot drop. And as soon as you lose that, you run that panic sensation and you can very easily drown.”

Bell and his team are well-trained, with plenty of experience. Even so, he says it’s tough to rescue someone once they are already in the river’s grasp.

“Usually we’re out of the fire house within a matter of a minute, and then we have to go down there and it’s going to be five to ten minutes to get to the river’s edge to put the boat in. And then it’s going to depend on where in the river from where we launch as to how long it takes us.”

Too often by the time swimmers realize they are in trouble, it’s too late. Captain Bell notes that it can take up to 20 minutes just to reach the scene. “A swimmer could very much be in a fight for their life prior to us arriving, and have lost that fight.” MCFRS is asking anyone who is visiting the Potomac River to be aware of the dangers and respect the river.

The Billy Goat Trail, especially section A, is challenging and dangerous. A sign in early parts of the trail says: “Difficult Trail Ahead. Many hikers are injured every year on this section of the Billy Goat A trail. The terrain includes sharp drops, requires jumps across open areas, walking along the edges of rocks and a climb up a 50-foot-traverse. Beyond this point, the next available exit is at the midpoint, up to on hour hike over difficult terrain. If you are tired, low on water, or unprepared for a very strenuous hike, please turn back.”