Now thru June 26, it’s the story of two women thrown together by a cosmic force with a wicked sense of humor. 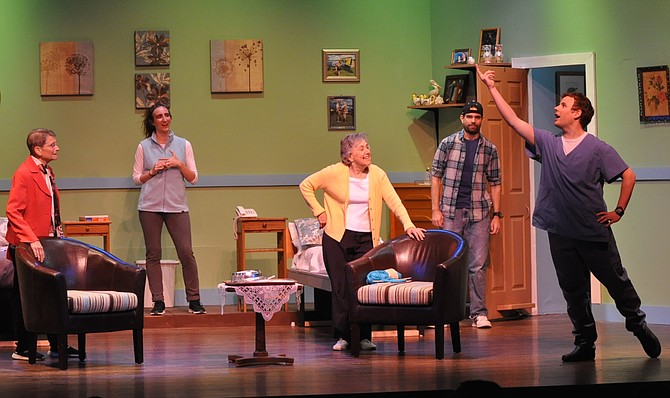 The Little Theatre of Alexandria (LTA) is presenting “Ripcord” from now through June 26. It’s the story of two women thrown together by a cosmic force with a wicked sense of humor. The play is written by Pulitzer Prize-winning playwright David Lindsay-Abaire, who masterfully injects inspired moments of physical comedy and unexpected truths into the story.

Janice Zucker is playing the role of Abby Binder. “She is a very angry, bitter, sad and lonely older woman who has had more than her fair share of hard knocks in her life. She has put up a wall around herself because of it and doesn't want to let anyone get close to her. She's kind of just going through the motions of life without really enjoying it at all,” she said.

Cameron McBride is playing the role of Scotty. “Scotty is a resident aide at the facility where the play takes place, and often finds himself to be the sole voice of reason. He cares very much about the people there but has his own life that he still wants to explore. Scotty might be still finding his place in the world, but he's doing the best he can on all fronts,” he said.

Kathy Ohlhaber is playing the role of Colleen. “I always gravitate to the deeply troubled and broken characters; the more dramatic they are the better. There is nothing like a good freak out on stage. So, comedies are a great way for me to challenge myself and keep the balance as an actor. Colleen has such a big, over-the-top personality, which is so fun to play. Just with a more dramatic character, I still have to find the elements that make her a real person that the audience can connect with, not end up being annoyed by,” she said.

Matt Baughman is playing the role of Derek, Colleen’s husband and Marilyn’s son-in-law. “He’s more realistic and reserved than his wife; always cautious and worried. He’s the epitome of a loyal husband, and will do anything for his wife. I find this character appealing because none of the emotional weight of the play is on my shoulders, I just get to pop in here and there and have fun. A great first show to shake of the quarantine rust,” he said.

Cameron McBride, who plays the role of Scotty, said: “Theatre in the age of COVID is not only a blessing considering how long we were bereft of it, but also a challenge. Ensuring the safety of the cast, crew, and audience has brought many adjustments and changes to the normal rehearsal process. We have a wonderfully talented group, however, we have been able to put together a show that does justice to the material while considering this challenging time. This show has more serious dramatic elements and themes than previous shows I’ve worked on. Family struggles, staying relevant, finding a place in the world – don't worry, there are still lots of laughs to be had here. But there are a lot of slower, more thoughtful stages in the plot that might catch you by surprise.”

Janice Zucker, who plays the role of Abby, said she hopes the audience enjoys the production. “You just have to be open to it. And maybe have a little help along the way.”

Marsha Rehns, who plays the role of Marilyn, said: “I hope the audience laughs, enjoys the plot twists, and appreciates why the play is called "Ripcord."

Kathy Ohlhaber, who plays the role of Colleen, Marilyn’s daughter, said “Although this is a hilarious show, it is ultimately about the importance of having human connections in your life. What a fitting message as we emerge from the COVID-19 pandemic. We all need overdoses of hope now to counteract the darkness many of us experienced in 2020. I want just the very act of getting back to the theater to be an amazing experience for the audience, but I also want them to feel hope watching this show. If nothing else, maybe the vibrant, elated energy of this cast transcends the 10-foot safety distance between the audience and the stage.”

Director Jessie Roberts said, “Even people whose personalities are fundamentally different can not only get along with each other but they can find positive insight into themselves through discovering each other's strengths – and weaknesses.”

He added: “Certainly, the challenges of doing a play that is based on personal interactions during the pandemic were unique. Fortunately, most of the characters in the play don't like each other or have a purely professional relationship so distancing wasn't too difficult. But it was frustrating for the actors and for me, too, to not be able to see and react to facial expressions during the rehearsal process during which we had to be masked.”

Co-Producer Lynn O’Connell said: “I had actually produced “The Revolutionists” in March as well, and from that experience I felt quite comfortable navigating Covid safety measures and best practices. Now, I shall take a break for a while – and travel.” The other producer is Alan Wray.

She added: “This is truly a comedy, and we want people to leave laughing and being joyful about being in a theatre again. That said, the play does have an underlying theme of the importance of connecting with others and of forgiveness.”

“Ripcord” will run now through June 26. The venue is located at 600 Wolfe Street, Alexandria. Visit the website at http://thelittletheatre.com/.