Colonial Era House on Telegraph Road Is Going Up for Sale

It dates back to 1766, and has seen a slice of American history. 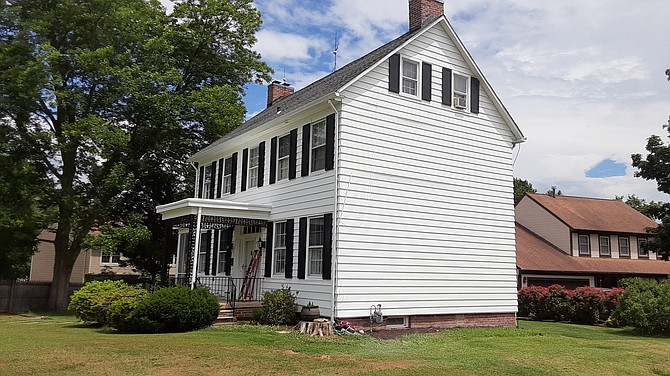 The Belvale House dates back to the 1700's and it will be for sale soon. Photo by Mike Salmon.

The River Farm is not the only historic place in the Mount Vernon area with ties to George Washington. A few miles east lies the Belvale House in Fairfax County, and its current owners are ready to sell.

After years of living amongst the historic lore of the Belvale House on Telegraph Road, the residents are downsizing and putting this historic

The Belvale House dates back to the 1700's and it will be for sale soon.

house on the market, saying goodbye to the wooden, two-story farmhouse that was built in the 1763-1767 timeframe.

According to documents in the Virginia Room at the Fairfax County Library, the property dates to a 1698 land grant to Richard Carpenter, and then George Johnston, who built the house before he died in 1766. Johnston was a friend of Patrick Henry, and affiliated with the Stamp Act of colonial fame, and both worked with George Washington. “George Johnston succeeded George Washington’s brother Lawrence as Trustee of Alexandria in 1752,” it said in an old 1965 newsletter story from Franconia. Several of George Johnston’s sons fought in the Revolutionary War.

In a property description on the “Historic American Buildings Survey Inventory,” dated January 1971, there was a one-story wing to the house that was destroyed in a fire, it said, and a black marble mantel in the drawing room, and an Italian pink mantel in the library. “According to the present owners, the old library is now the kitchen and dining room,” it said.

In addition to a connection with colonial history, the house saw many activities that were common in those times, including a possible duel, bodies buried in the yard, and spirits lurking. According to one story about the house, there was a duel where one of the guests was killed and buried under a cedar tree. “On the second night of each month the ghost appeared in the grove south of the house. Under a tall cedar tree lies his body, that of a young man killed in a duel,” the story said.

The other version of the ghost origins said it was a guest at Mount Vernon, who was at a ball in the Belvale house, and was killed somehow. Whatever the origin of the spirits in the house, “everyone in the neighborhood knew of the ghost,” said the writer of this Franconia newsletter, dated September 1964.

The house at Belvale, stayed in the Johnston family until 1925 when it was sold to Dr. A. B. Weldeford, and when their family lived in the house, that’s when the first stories of the ghost were recited.

On Halloween around that time, the Weldeford’s had a costume party, and Dr. Weldeford dressed up like a ghost, as did one other party-goer, and they entertained the guests until looking over to the cedar tree in the side yard. “Just as the guests discovered these two, a misty apparition was seen in the woods near the cedar tree, and all were convinced the real ghost had come to the party,” the story read.

In 1947, the present owners moved in on the second day of the month and “at midnight they climbed the attic stairs to catch a glimpse of the ghost from the south window, whereupon they clicked the light switch and all the lights in the house blew out,” the story said. This was the Richards family, and there were bumps in the night, an invisible rocking chair creaking, and young Diane, a seven-year-old that saw “none other than George Washington sitting on the living room sofa reading a book.”

According to this newsletter, and a Fairfax County Historic Landmark Survey document, dated January 1971, the graves did exist on the property. “On the property is a cemetery which may have been a slave burial ground,” the survey document stated.

Dolbert Richard owned the house at that time.

It is being listed by the owners’ son Sean Vermillion, an agent with PropLocate Realty.

Vermillion is familiar with the stories, and has seen the original wooden walls underneath the siding. “Some of the windows have that wavy look,” he said.

Historic houses are hot on the market to some, said Sharon Hinson of HistoricProperties.com. “They have lovely woodwork, beautiful floors, gracious rooms, fireplaces with mantels, moldings, ceiling medallions, wainscoting, and wide baseboard. Most of these things cannot be found in new houses, even if you are shopping with unlimited funds,” she said in an email.

According to the county, just because the house is historic and on the National Register, it still isn’t safe from developers. Historic designation does not “prevent an owner from renovating or demolishing buildings,” the Virginia Department of Historic Resources said on their website. Vermillion doesn’t want to see the house demolished and tried for years, hoping the county would buy the home, but he’s been unsuccessful.

As to the ghosts, the historic figures that came through the front door, and the discussion of the Stamp Act in 1765, there aren’t any signs to the naked eye. But, “You never know what’s behind the plaster,” Vermillion said.