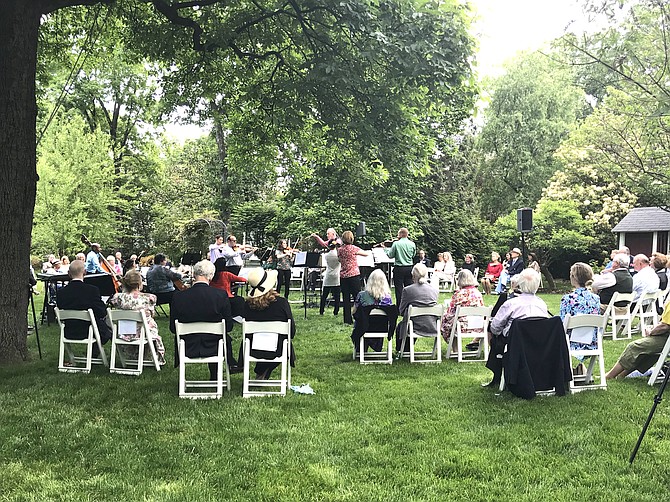 Maestro James Ross conducts 14 performers from the Alexandria Symphony Orchestra in a return to live performances on May 15. This concert will be offered virtually to the public on June 16. Photo contributed

The blackened screen slowly fills with cicada sounds, and soon a red-eyed cicada crawls over the score of the “Arrival of the Queen of Sheba.”

As 14 musicians from the Alexandria Symphony Orchestra (ASO) begin to play, the camera focuses in on a hedge of white blossoms, turns to James Ross setting up sheet music in the garden and moves to flashes of the concert donors back together again in person after 18 months.

Melynda Wilcox, President of ASO’s Board of Trustees, says they wanted the viewers to feel like they were on the inside of the production of the concert by showing preconcert preparations and interspersing the concert video with detailed program notes by Ross.

Wilcox sys they planned the concert around the theme of the cicadas. As the concert got closer, “We got a little nervous; the cicadas were delayed but we decided to just embrace it and make it part of the live event.”

James Ross, Music Director of ASO, explains his excitement in sharing the pure joy of being above ground again with the cicadas, “their flapping wings and mating call. It felt like we had come out of hibernation.” Ross explained, “The program is devoted to celebrating your and their emerging from separation, and it feels so good.”

This concert was held in the garden of Dick Blackburn on May 15 and limited in size to a group of donors sitting in pods on the lawn. It was filmed and made available virtually June 9 as a fundraiser with an optional wine and charcuterie from Grape + Bean Rosemont to be delivered to your home. The concert will be available to the public on June 16 at no cost.

Arms flashing, Ross waves in the violas while sporting his garden attire of bright pink shirt and purple tie. “This next one is the group of threes—The Third Brandenburg Concerto for 3 groups of 3 instruments.” Wedged in the middle and commissioned by the ASO is “The Fantasy Ritornello,” by Jonathan Kolm, a local artist. Ross wonders aloud how Kolm crawled inside Bach’s copious brain but kept in solid touch with his own compositional brain.

Kolm said, “It was a hybrid melding of Bach and myself.”

The program concludes with Handel’s zippy Concerto Grosso (Alexander’s Feast) filled with instrumental interludes, one of which the ASO plays. Ross says, “I honestly misread this and thought it was Alexandria’s Feast. I thought what could be better — food and Handel in my hometown. That’s what we’re all about.”

There had been some outdoor concerts around the City in the summer and fall of 2020. But this was the first official time the performers had been together as a formal group complete with rehearsals and fully conducted and able to experience the feedback of the audience.

George Hanson, ASO Executive Director says, “As a performer myself I know a musical performance is a symbiotic event. Performers receive feedback beyond applause. It’s so important; you sense the audience response.”

Wilcox says their next public event in 2021 will be the annual July concert on July 10 this year, which is the biggest public event for the City.

“This concert has been going on for at least 30 years. I don’t know how COVID will affect the turnout but I have the feeling people will want to be there.” It is held at Oronoco Park with the City encouraging people to be at all the parks along the way.

She says the program will be a mix of a little something for everybody. Of course there will be the 1812 Overture “but we don’t know about the canons yet.” There will be the patriotic favorites with the Armed Services salute, which people always like; some broadway, some entertaining things sprinkled in then and now.

When COVID hit in March of 2020, Hanson said they had the sad duty of informing the ticket holders that all concerts had to be postponed. “We used the word ‘postponed’ because we planned to deliver what we had promised but we couldn’t be sure when.”

Ross remembers when COVID hit and the lockdown took place, “I felt vulnerable because it was institutional, the way in which I relate to the world, sharing large concerts.”

As weeks went by, it became clear that the entire 20-21 season was in jeopardy. Hanson said they set up a task force to look much farther ahead with the option to make the big step of transporting the entire season into the future 12 months. “We very nearly retained every element of every program.”

IN LATE MAY 2020 Goodwin House came to ASO and asked if it was possible to come and play in the courtyard for their residents who may not have seen anyone for a couple of months. Ross says that two different horn players they asked to play in the brass quintet felt it wasn’t safe. “I’m a horn player so I played myself to see what it was like. It was so poignant about the invitation.” Some Goodwin House residents were able to watch outside with masks, and others looked out the windows.

Hanson says it was such an enormous success they were encouraged to plan other outdoor concerts in successive weeks with small groups of musicians. Ross says, “We couldn’t actually rehearse so we just showed up as a different kind of freelance talent. As more happened we could see how grateful people were to feel the power of music again.”

ASO was also able to creatively continue their Simpatico education program for students at John Adams Elementary School. Wilcox says, “It is built on a Venezuelan concept of music for social change. Put an instrument in a child’s hands and they develop as part of an ensemble, learn pride, to stick to it, to show up.”

Hanson offers some good news. “We just learned that Schlesinger Concert Hall where we perform most of our programs, will be 100 percent capacity. This is the information the had been waiting for, and we will be reaching out in the next few days to our subscribers with information about the program.”

Hanson says the regular season will open October 2 and 3 with Beethoven’s 9th Symphony “Ode to Joy.” November will be a collaboration with the Alexandria Film Festival and December a fairly traditional holiday concert.” The season concludes with Rachmaninoff, featuring a brilliant pianist in February, and in April “the last sound you hear will be Brahms, glorious and uplifting.”

One of the challenges when COVID shut down the orchestra was financial. Wilcox said they applied tor PPP funds and had them in two weeks. “We wanted to show our musicians they are important to us and we have maintained all of our staff at full pay and benefits.” Ross adds, “We decided to pay musicians who had scheduled their time for the cancelled concerts. As a time like this, no one suffers more than the arts community.”

Ross says the biggest challenge for him was also the biggest boon. “We had to get good at something really fast, to make something happen in 2 days or a week where usually we plan a long time in advance. You can’t move on a dime with a big orchestra.

“It became clear pretty fast that we had no chance for a regular season. We had to learn to be nimble, and luckily the Board thinks this way.”

ASO is composed of local professional musicians with a pool of over 100 musicians from which they can draw. “Many of the musicians have come from military bands which are extraordinarily competitive so we wind up with some of the best in our community” Hanson continues, “We are regarded as one of the best regional orchestras in the country.

“Live performance is such a critical part of any community. Alexandria has a real gem, the centerpiece of a large tent of performing arts.”