‘We Want to Help our City Businesses Thrive’ in Fairfax
Votes

‘We Want to Help our City Businesses Thrive’ in Fairfax 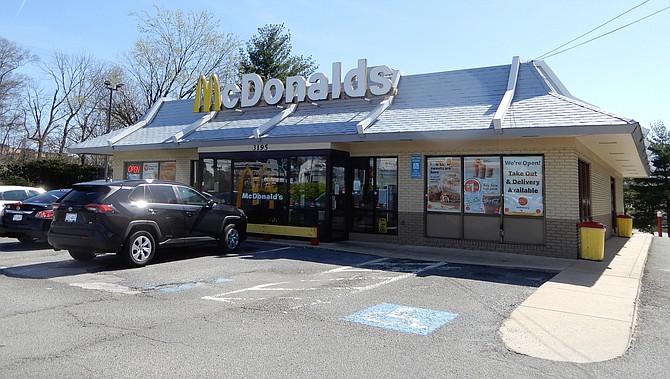 This existing McDonald’s in Fairfax City was built in 1970. Photo by Bonnie Hobbs.

The McDonald’s is between Old Lee Highway and Old Pickett Road in Fairfax.

The Fairfax City Council has given the go-ahead for the McDonald’s at 3195 Old Lee Highway to get a whole new look. Near Old Pickett Road, the restaurant’s iconic exterior will soon be changed, and drive-through windows will be added on the building’s north side.

The applicant, Venable LLP, will renovate the existing, 3,309-square-foot restaurant (one story with a basement) and enlarge it into a contemporary-looking, 3,420-square-foot eating establishment. Council approved the proposal following a March 23 public hearing.

“The design is very pleasing,” said Councilmember Janice Miller. “And I’m happy the applicant worked so well with the BAR [Board of Architectural Review] to improve the final project.”

The structural elements of the old building will be retained, while the exterior will be both freshened and updated. The mansard roof will be removed and replaced with a flat roofline and cornice. A new storefront will be installed on the front and sides, and the brick will be painted gray.

There’ll be 4,250 square feet of tree canopy, as well as evergreen shrubs and flowers. Ten trees will be removed, but 17 will be added. In addition, the applicant will underground all onsite utilities.

PLANNER Supriya Chewle explained the project’s details during the public hearing. She said McDonald’s eventually anticipates 412 more daily trips to its restaurant than now. “Most of the traffic entering and exiting will do so via Old Pickett Road,” she said. “And that’s how customers will access the drive-through windows. From Old Lee Highway, there’s just one way in and one way out.”

Chewle also noted there’ll be a new crosswalk across the driveway entrance.

Councilmember Sang Yi asked what the morning and afternoon peak-traffic hours are in that area, and City traffic engineer Curt McCullough replied, “Between 7 and 8 or 9 a.m. in the morning and between 4-7 p.m. in the afternoon. We consider it the same as the peak hours of the nearby highway.”

Representing the applicant, attorney Evan Pritchard said the site is just under an acre and the existing building was constructed in 1970. “This change will modernize the look and feel of the building and give it a nice, new appearance that fits in more with McDonald’s branding,” he said.

Councilmember Jon Stehle asked about the project’s impact on the employees. “There’ll be more automation and more modern equipment so, possibly, a slight reduction in staff,” answered Pritchard. “During the pandemic, drive-through and walk-up, takeaway service has increased.”

MAYOR David Meyer said he was glad to see the redevelopment and modernization of existing businesses in the Fairfax Circle vicinity. So, he said, “I see this as a positive and significant reinvestment in that area.”

During the call-in portion of the meeting, resident Kevin Alexson said he was “excited about the aesthetic improvements to that property.” But he wondered, “How will the growth of that whole area, including Scout on the Circle, affect the traffic there? I also want to know the pedestrian-safety impact for that area.”

Douglas Stewart, of Fairfax City Citizens for Smarter Growth, said, “We believe adding drive-throughs would hinder the City’s economic development and encourage less walkability. But I’m not against this particular application.”

The Council approved the project unanimously.