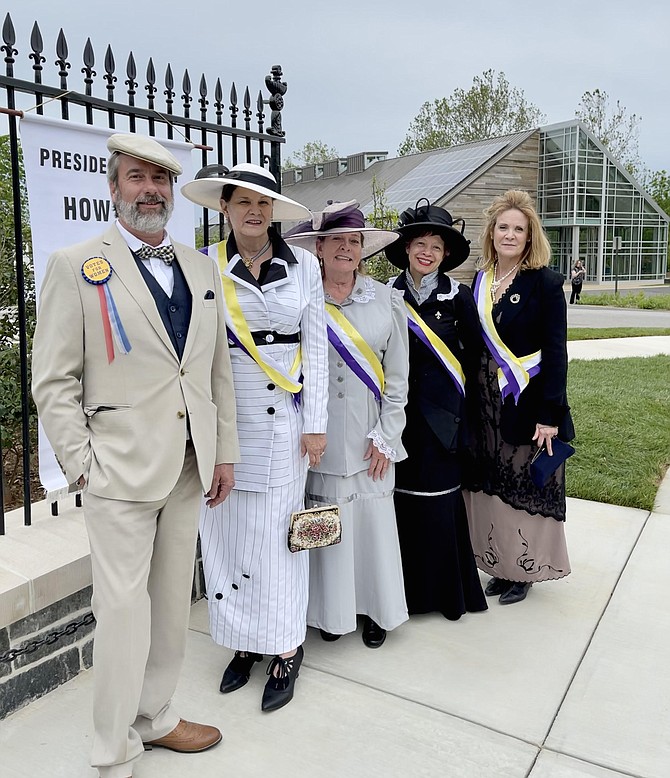 Dr. Thelma Daley, Past President, Delta Sigma Theta Sorority, poses with a statue of Mary Church Terrell, an honorary member of the sorority and co-founder of the NAACP. The Sorority contributed $100,000 to the Memorial’s $2.7 million dollar funding. 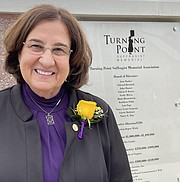 Jane Barker, Vice Chair/Co-Founder of the Turning Point Suffragist Memorial Association, extended an invitation to all to “come here and learn this history and enjoy our beautiful memorial in this gorgeous park.” 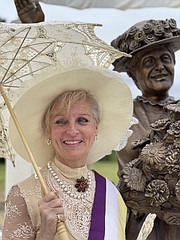 Re-enactor Lynne Garvey-Hodges, as Mrs. Robert “Mimi” Walker, who was arrested for picketing and served 60 days at the Workhouse, poses with the statue of Carrie Chapman Catt, a leader in the suffrage movement and founder of the League of Women Voters.

For more than seven decades, millions of American women sought the right to vote. On May 16, the first monument in the country to commemorate their struggles, to tell the lengthy story of the suffragist movement, and to celebrate suffragists’ accomplishment – the passing of the 19th Amendment – was dedicated in Lorton. Located on the grounds of Occoquan Regional Park, not far from where suffragists were incarcerated and tortured for peacefully picketing on the sidewalk in front of the White House, the Turning Point Suffragists Memorial was dedicated in a small ceremony, live streamed across the country, in advance of its public opening.

Jane Barker, Vice Chair/CoFounder of the memorial association, shared the early humble vision, first discussed by League of Women Voters with NOVA Parks staff, to tell the local story of the suffragists imprisoned at the nearby Occoquan Workhouse. They discussed “a brick wall with a few picture plaques of the women, …on a small brick-paved area that would be called the Turning Point Plaza; the projected cost was $25,000.” They soon realized “telling just part of the 72 year long struggle wasn’t enough – we needed to create a national memorial that was befitting their sacrifices and accomplishments.” The nearly $3 million dollar memorial, designed by Robert E. Beach Architects, LLC, is the culmination of that needed recognition.

SEVERAL SPEAKERS spoke of the effort that went into making the bigger vision come to completion. The site is seen as an apt location due to its historical setting near where the horrible treatment of suffragists led to the important “turning point” in public opinion, from which the memorial draws its name. Cate Magennis Wyatt, Chair of the NOVA Parks Board, said thousands who stroll by will have the opportunity to learn the story of the right to vote struggle in America which is not taught in history books; to learn history and “herstory.” And through international tourism, “for people world-wide to aspire to suffrage in their own countries.”

NOVA Parks will steward the care and upkeep of the memorial on its grounds.

Executive Director/CEO of the memorial association, Pat Wirth, who oversaw completion of the project, spoke of her expectation that the Turning Point Institute to follow will inspire girls to leadership roles and train young women in the skills of the suffragists: public speaking, political candidacy, social awareness, civil and equal rights.

The Turning Point Suffragist Memorial uses a significant number of stations, 19, to tell the suffrage movement story from 1848 to 1920. Its cost was funded through contributions of thousands of donors from 45 states and the District of Columbia, Fairfax County, the Virginia Commonwealth, foundations, corporations, the Delta Sigma Theta Sorority, women’s associations, and non-profit organizations. Three life-sized bronze statues, donated by the National Suffrage Centennial Commission, reflect the images of Alice Paul, co-founder of the National Women’s Party; Mary Church Terrell, co-founder of the NAACP and an organizer and honorary member of Delta Sigma Theta Sorority; and Carrie Chapman Catt, President of the National American Woman Suffrage Association.

Also included in the memorial is an actual section of the White House fence, on loan from the National Park Service; the first section to be given.

THE FENCE was a backdrop for the quiet picketing the suffragists carried on in front of the White House, the first ever to protest there, to gain President Wilson’s attention, earning them the name, “Silent Sentinels”.

The Nineteenth Amendment to the U.S. Constitution prohibits the United States and individual states from denying the right to vote to citizens on the basis of sex. The first women’s suffrage amendment was introduced in Congress in 1878, but not passed until 1919; it was ratified by the required 36 states and was certified on Aug. 26, 1920.

To learn more about the memorial and the Turning Point Suffragist Memorial Association, see https://suffragistmemorial.org/