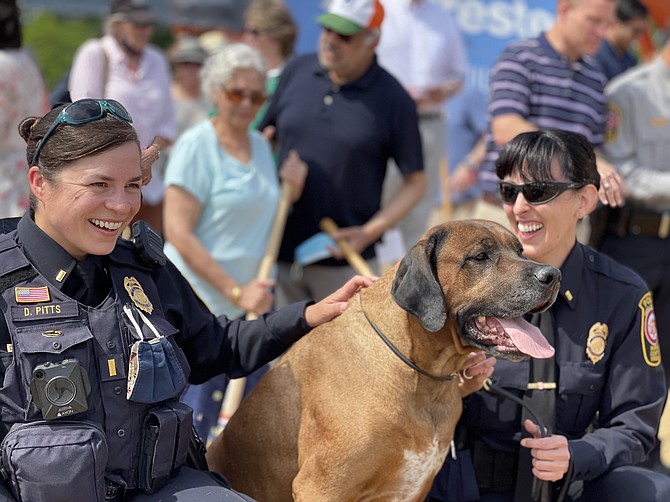 Dr. Karen Diviney, Director, Animal Sheltering, and Capt. Jerry Watts, Commander, Animal Services Division, whose departments will be served by the new facility along with the police Patrol Division, stand with facility rendering. 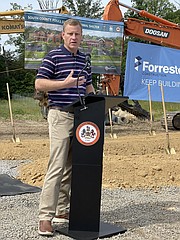 Board of Supervisors Chairman Jeff McKay addresses participants, promising that resources are coming to South County.

Fairfax County officials, police, and community members joined in officially breaking ground for the new South County police station and animal services shelter on May 22 at its future site on Lorton Road, between Hooes and Workhouse Roads. The $30 million dual use facility includes 34,000 square feet for police, 23,000 square feet for animal services, and 20,000 square feet of outdoor space for use by animals, a fuel island, and parking. The facility, a two year project, is scheduled for completion in spring 2023.

Many see the irony of building a police station on the former Lorton Workhouse/Prison site, including Fairfax County Supervisor, Dan Storck, in whose District the facility will rest. Storck explained that in 1910, the workhouse concept envisioned a “place of rehabilitation,'' a concept he notes, the County has applied to the area with “investment of hundreds of millions in this community to create a 21st century community.” Fairfax County Board of Supervisors Chairman, Jeff McKay promised the gathered community members, “more resources are coming to South County”…the Board is “investing here – all corners of the county must succeed if the county as a whole is to succeed.”

The creation of the new police station is expected to have a ripple effect throughout the county, by making possible a full police redistricting. The area is currently served by the Franconia and West Springfield Police Stations. Major R.A. Blakely, Commander, Patrol Division II, indicates that the new plan will allow all station territories, not just the two current servicing stations, to shrink, even down to the individual officers’ beat responsibility; resulting in greater police presence, faster response times and better service to citizens throughout the county. The new South County station will include Animal Protection Police (APP) presence on site for significantly improved response times to locations distance from their current West Ox Road location. APPs currently cover all 391 land acres of the county from that single location.

ANIMALS OF ALL TYPES, and their families, too, will have better access to shelter services with addition of the second shelter. Dr Karen Diviney, Director, Fairfax County’s Department of Animal Sheltering, credits the Board of Supervisors with understanding the value of pets in peoples’ lives; a lesson learned elsewhere in difficulty, such as during the Katrina hurricane disaster. The County’s current shelter was renovated and expanded to 2,700 square feet under Diviney’s guidance, about ten years ago, changing it from a sad “pound” environment, to “a state of the art operation on a par with the best facilities across the country; with an increased positive release rate, and a vibrant 300+ person volunteer and foster program.”

Upon completion the facility will have space for public art, infrastructure for solar energy, electric vehicle charging stations, and natural landscaping with a bird friendly design.