Indulge Your Fantasies at Cars and Coffee
Votes

Indulge Your Fantasies at Cars and Coffee 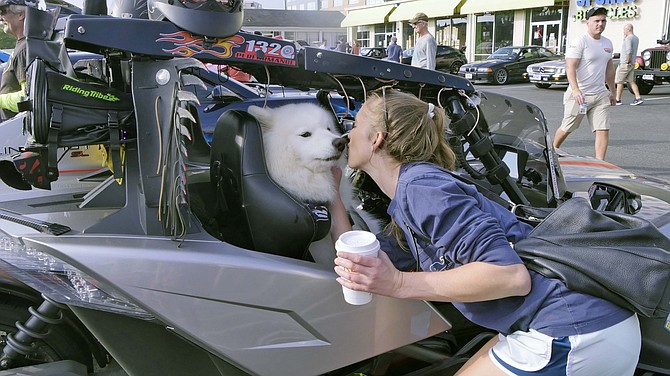 Leo, a 4-1/2 year-old Samoyed, gives a lick of appreciation to his owner for his turn in the driver’s seat of the Batmobile. His owner declares Leo’s driving record is clean. 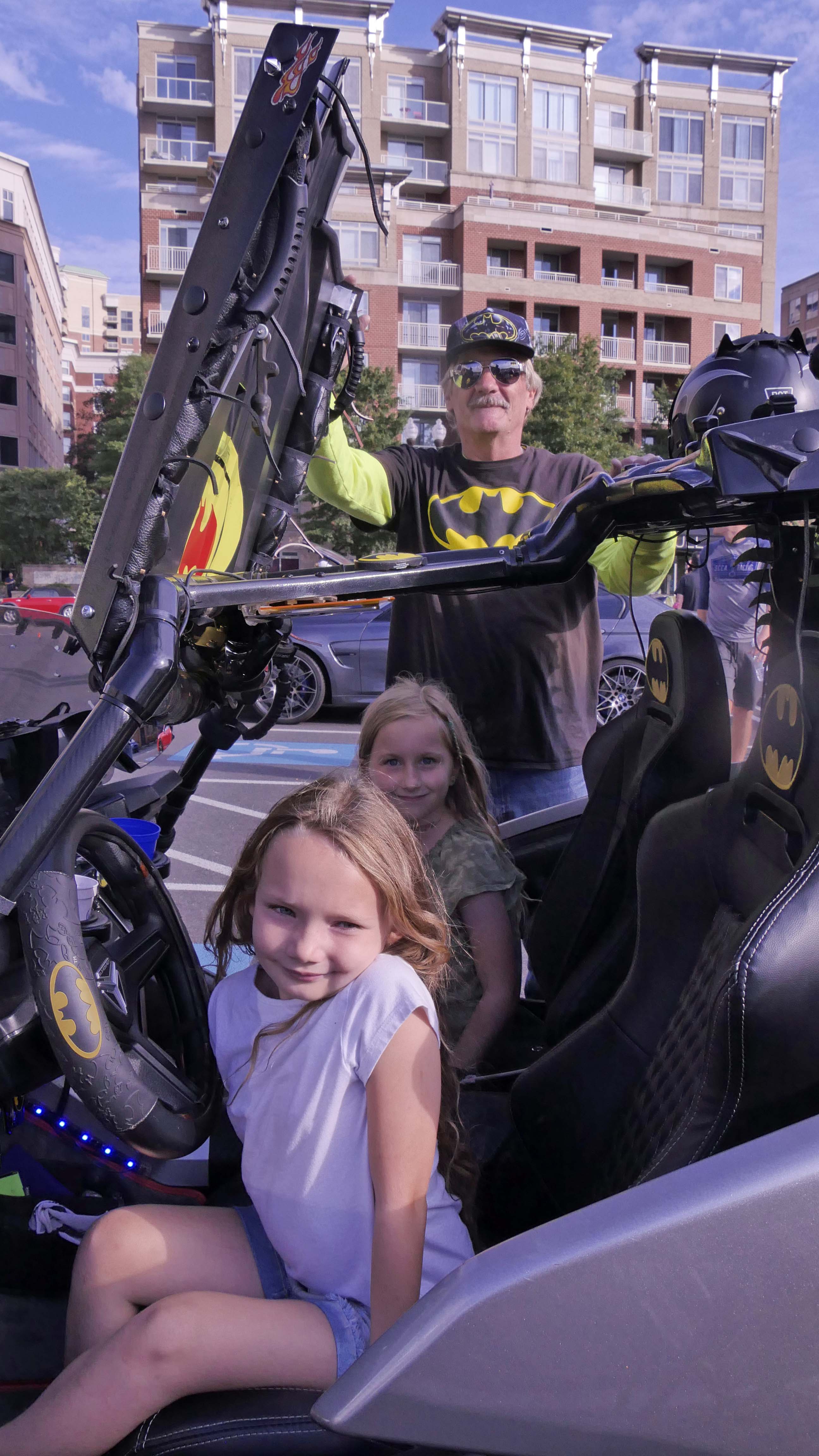 David McDowell stands by as Alexandra Hawkins and Amory Rauhala, second graders at Glebe Elementary School, practice their pretend driving skills in his Batmobile at the Ballston Improvement District (BID) Cars and Coffee event October 16.
Blink twice. You thought you just saw an Edsel drive by in the parking lot. You thought they went out of production in 1960 after two short disastrous years. And there seems to be a Batmobile parked and open for exploration. These are just two of 60 muscle cars, collectibles and antiques on display at Cars and Coffee in the Gold’s Gym Ballston parking lot on Wilson Boulevard on Oct. 16.

Leo, a 4 1/2 year old Samoyed, wedges himself into the driver’s seat of the Batmobile which is based on a 2016 Polaris slingshot. Alexandra Hawkins and Amory Rauhala, both second graders at Glebe Elementary, scoot into the Batmobile next and practice their driving skills. David McDowell, the owner, says he bought the vehicle at a dealership in Bristol. “I bought it without a roof on it and drove it all the way back and couldn’t get out of the sun.” He likes his Batmobile because he can sit in it instead of on top of it, like a motorcycle. He explains he had a motorcycle accident.

Michael Fitzpatrick, organizer of the event, says he was there at 6 a.m. getting the parking lot ready for the event.  Today’s event is part of a series of biweekly events from Sept. 18-Oct. 30. “On Oct. 30 we’ll have a DJ and Halloween theme. I’m going to wear a costume,” says Fitzpatrick,”for the first time in 40 years. I think I might be the Elf, like from the movie. I wonder if I can even find an Elf costume.”

The Cars and Coffee series is a free family-friendly event open to all car owners and car enthusiasts, no matter what age. The series features live local music and complimentary coffee and baked goods provided by Gold’s Gym. It is presented by Dominion Electric in  partnership with Ballston Improvement District (BID). BID is a 25-block neighborhood with more than 8.3 million SF of retail space and 8,000 residential units. For more information www.ballstonbid.com 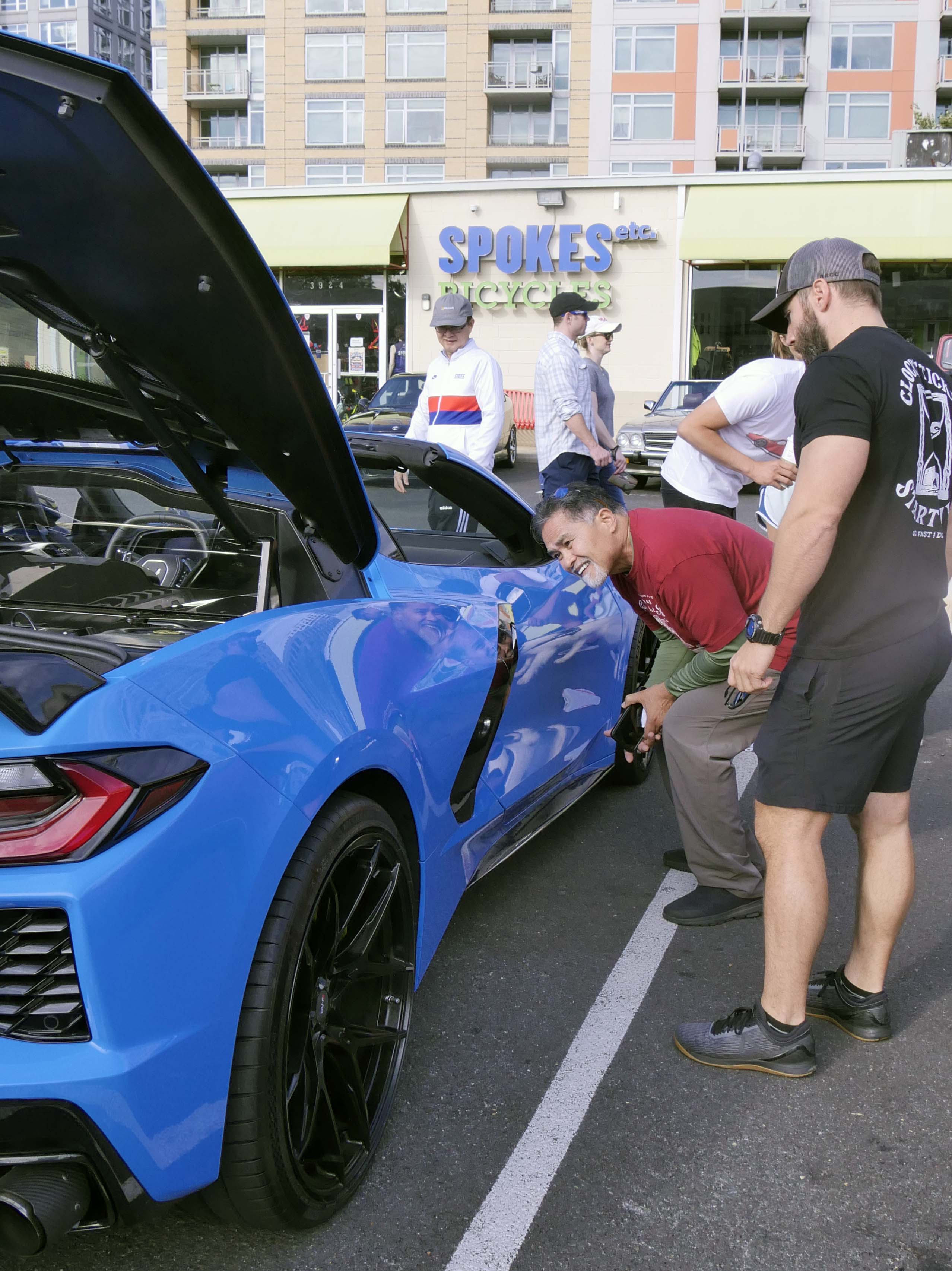 Car enthusiasts have plenty to investigate with over 60 cars at the Cars and Coffee event In Gold’s Gym parking lot on Saturday, Oct. 16.