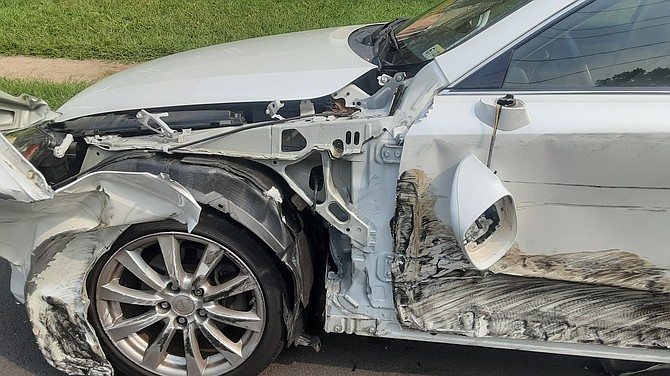 The police were called after this parked car was hit on Rolling Road. Photo by Mike Salmon.

A car traveling north on Rolling Road sideswiped a parked car, causing significant damage and highlighting the need to widen Rolling Road, which is a project already on the books but waiting in “upcoming projects,” holding pattern.

The car was Senait Bella’s, a resident on Rolling Road for over 20 years who has seen her share of speeding cars and close calls in this part of Springfield.

“People speed through this, this Rolling Road is dangerous,” she said. “Luckily there was no casualties.”

The wreck was right at rush hour on Monday, Sept. 13 and the driver remained at the scene. Police did come and write a report, Bella said. 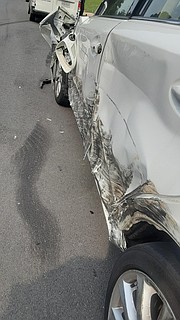 Rolling Road is scheduled to be widened but it was not in time for this car.

The Virginia Department of Transportation has had the widening of Rolling Road on their schedule for a while, and has conducted community meetings in the process to get the project done. Included in this two-phased project is the Old Keene Mill Road Intersection Improvements project which is underway now, and nearly complete.

The second part of the project includes widening Rolling Road from two to four lanes between Viola Street and Old Keene Mill Road, traffic signal upgrades, a shared-use path for bicyclists and pedestrians and access management improvements. The widening work is scheduled to begin in early 2024, and the price tag for both these needed improvements is $79 million.