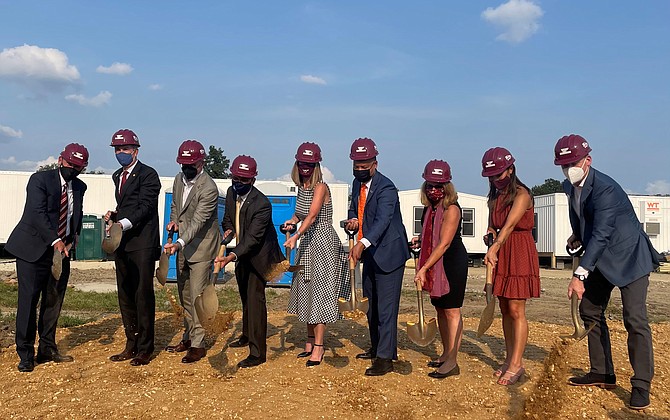 Gov. Ralph Northam, second from left, and Alexandria Mayor Justin Wilson, fourth from left, are joined by local dignitaries and development officials at the Sept. 14 groundbreaking for the Virginia Tech Innovation Campus at Potomac Yard.

Potomac Yard was once one of the largest rail yards in the country, employing hundreds of engineers, clerks, brakemen, car inspectors and switch

Gov. Ralph Northam, second from left, and Alexandria Mayor Justin Wilson, fourth from left, are joined by local dignitaries and development officials at the Sept. 14 groundbreaking for the Virginia Tech Innovation Campus at Potomac Yard.

operators. In the 1990s, it was redeveloped into a strip mall with a massive surface parking lot. Now it's about to begin its next chapter as an "innovation district," a dense urban space with millions of square feet of office, retail, hotel and residential space anchored by a Virginia Tech graduate campus.

"It will transform the economy of the region," said Virginia Tech President Timothy Sands, who was in Alexandria this week for the groundbreaking of the new campus. "I have no doubt about that."

The Innovation Campus will be constructed on land that was, until recently, a movie theater and parking lot. By the time the campus is ready to open for the fall semester 2024, it will be a place where 750 master's students and 200 doctoral students research the computer science and computer engineering of the future. The first academic building will be 11 stories high, followed by two more smaller buildings where students

"It will transform the economy of the region. I have no doubt about that."

and professors will mingle with the titans of the tech industry who are located in the surrounding blocks.

"Historically, the U.S. has enjoyed a preeminent global position with respect to technology development. But the competitive landscape has changed dramatically," said Letitia Long, rector of the board of visitors at Virginia Tech. "Our greatest opportunities and biggest global competitions and threats in the 21st century will be technology driven. They already are." 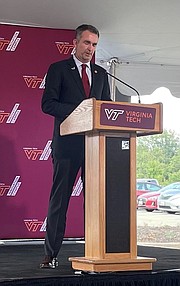 THE STRIP MALL at Potomac Yard was originally intended as a placeholder, a temporary solution to a 1990s-era debate over density. When developers were eyeing the shuttered rail yard for redevelopment the existing zoning would have allowed for 18 million square feet. But opposition from neighborhood groups prompted the City Council to restrict the site to 9 million square feet of development, a compromise forged in an effort to fight off a proposal to locate a football stadium there.

"I think we screwed it up. Badly," said former Councilman Lonnie Rich, the lone vote against the zoning change in 1992 that led to the construction of the strip mall.

The zoning envelope led to an oversized surface parking lot that dominates the site today, a suburban footprint in a rapidly urbanizing city. Despite the convoluted process that led to its creation, the strip mall was wildly successful — far beyond anyone's expectations. These days, Potomac Yard Shopping Center is so popular that the first question many people ask about the Potomac Yard redevelopment is what will become of the Target.

"I would say there is a strong probability that the redeveloped site will include a Target," said City Manager Mark Jinks, noting that the lease of the current Target location ends in 2028. "They do extremely well."

THE INNOVATION CAMPUS was part of an economic incentive package that helped Northern Virginia land the Amazon HQ2 in 2018. The idea is that the graduate campus in Alexandria would supply a pipeline of highly educated high tech workers who would provide the brainpower at the Amazon headquarters a few miles to the north in Arlington. The graduate campus was originally to be located on a plot of land known as the Oakville Triangle, but the project was later moved to Potomac Yard to give the graduate school room to expand.

"I told everyone who would listen — the media and everyone else — that we have buried the lede," said Alexandria Mayor Justin Wilson. "The most exciting part of that announcement was the Innovation Campus coming to the city of Alexandria."

EVEN THOUGH the first academic building won't be ready until 2024, the graduate school is already open for business. It's currently operating at a satellite location in Falls Church, where several dozen graduate students are already hard at work creating the technology of the future. One of those students spoke at the official groundbreaking ceremony this week, underscoring one of the principle objectives of the project: diversifying a field that's traditionally been dominated by white men.

"My goal is to create a movement in the software industry that's focused on accessibility and inclusion," said Tara Laughlin, a Boeing graduate scholar. "Empathy is the backbone of successful software, and creating things with all kinds of people in mind is the direction that I hope this field will go."