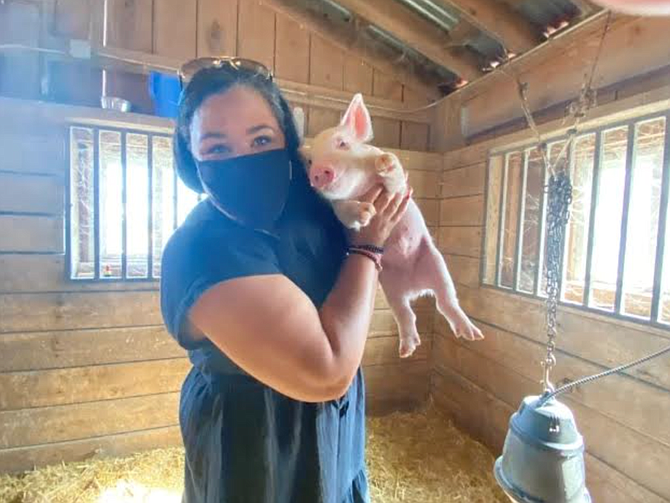 A self professed “kid at heart,” Fairfax County Park Authority’s new executive director, Jai Cole, is spending nearly every day with some time in at least one park. She recently marked a milestone toward her goal of visiting every one of the county’s 420 parks within one year of her September 2021 appointment. Her 210th park visit, the halfway point of her park journey, came with participation in the groundbreaking ceremony for the Stewardship Education Center within the Sully Woodlands, in Eleanor C. Lawrence Park, Chantilly.

Cole attributes the opportunity to play at Lake Fairfax Park, in her backyard as a child, and the “wonderful discoveries” she found there, with her later drive to become an ecologist; eventually leading her to head the large park system. Since pledging to visit all the system’s parks, Cole recently blogged, “I have had the opportunity to get a firsthand sense of what assets we have, the changes we should consider and the natural resources that are thriving and those in need of protection. I have also met many dedicated park employees, as well as residents who love their parks and are eager to see us make them even better than they are.”

Along the way, she has been behind the lectern making presentations, digging in the dirt to assist in removal of invasive vines, and even holding a piglet at Frying Pan Farm’s 60th year anniversary celebration. With seven more months until the anniversary of her appointment, Cole is well on her way to completing her personal challenge.  She plans to end her park trek at Lake Fairfax Park, her childhood park of wonders, as part of ceremonies for National Public Lands Day planned on Sept. 24.

The new Sully Woodlands education center groundbreaking ceremony, where Cole hit her halfway point ,“will be a state-of-the-art interpretive center for the community to learn about animals, wildlife and preservation,” according to the Park Authority’s announcement. The education center is slated to open later this year