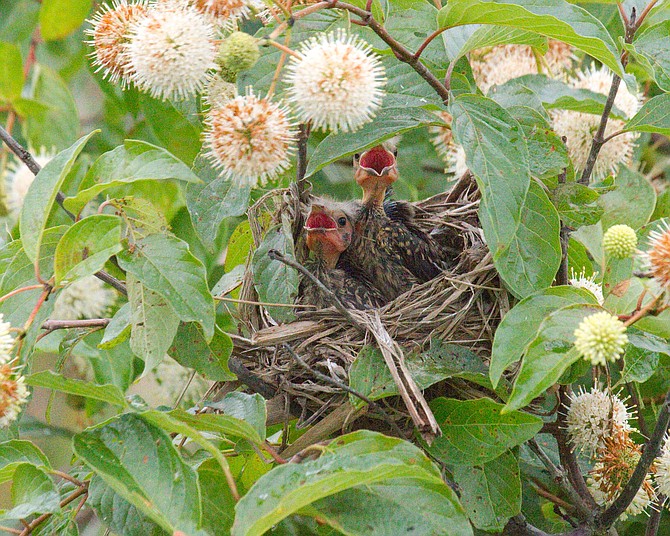 Birds are resourceful and make many different nest types. Songbirds make cup-shaped nests; woodpeckers, cavity nests; orioles, hanging sock-like nests; and shorebirds, scrapes in the sand. Master builders, many birds can weave materials and hold materials in place with their beaks and feet.

Nest materials vary by habitat and can include leaves, grass, twigs, moss, feathers, snake skins, fur, spider webs and experts say, virtually anything they can carry.

To bind nests together, they may use saliva, mud, caterpillar silk and leaf mold. Manmade materials like plastic tape and cellophane may substitute when snake skins are scarce. For nest linings, birds use finer materials to cushion and insulate eggs, things like grass, needles, reeds, mosses, lichens, down and feathers. 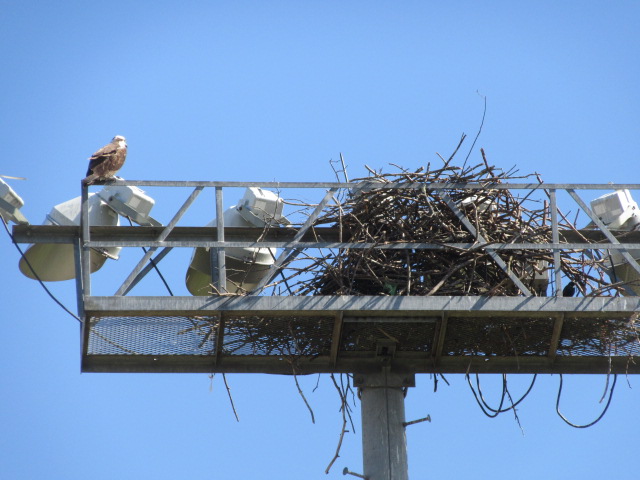 In the past two weeks or so, ospreys returned to Northern Virginia from their southern wintering grounds in Florida, the Caribbean and Central and South America. Ospreys are 23-inch-long, chestnut brown and white raptors. Locals have watched them carry and add sticks to their nests.  Many osprey pairs return to the same nest each year. They nest near water, including the Potomac River, and have been nicknamed “fish hawks” because they are excellent anglers, with live fish representing most of their diet.

An osprey nest is an unkempt jumble of sticks lined with materials like grasses and flotsam.  They build nests in trees and on platforms, utility poles, channel markers, waterfowl blinds and even moored boats. They often “decorate” their nests with plastic and Styrofoam scraps and other debris. People have found oddities like shoes, cans and even a Barbie doll in an osprey nest. After years of adding materials, nests can be ten to 13 feet deep and three to six feet across. 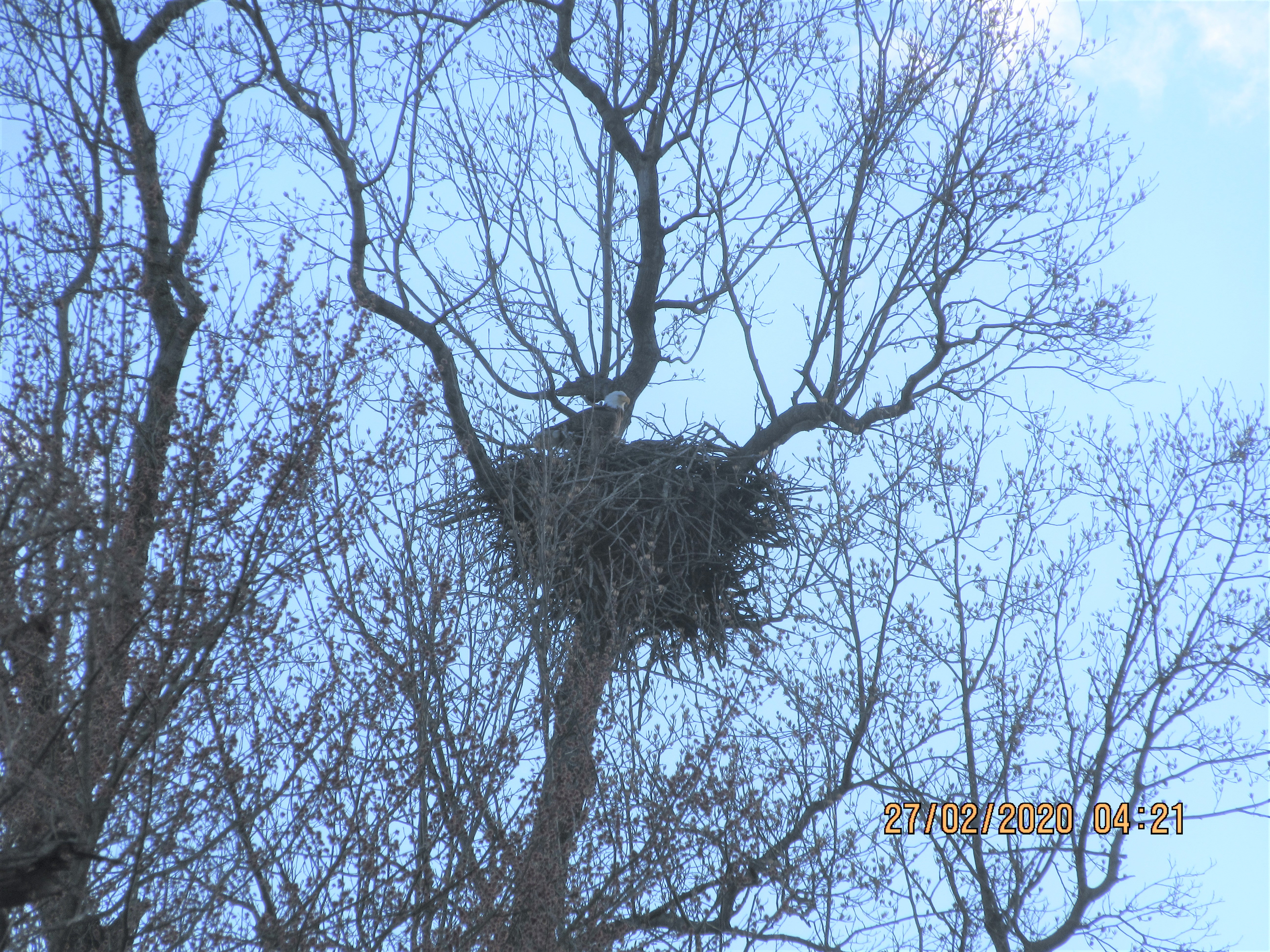 Bald eagle nests are very visible now, before tree leaves come out. All ages are delighting in watching a pair bring food to a nest, presumably to eaglets, along Dyke Marsh’s trail.

An adult bald eagle, the national bird, weighs between 10 and 14 pounds and has an eight-foot wingspan. Bald eagles build nests of sticks and other materials and make some of the largest nests in the world, some stretching to 10 feet across. Like ospreys, they nest near water and typically return to the same site each year and enlarge the previous year’s nest.  Between May and July, the eagle chicks will fledge at age 10 to 12 weeks.

Dyke Marsh’s spring visitors were once serenaded by hundreds of trilling marsh wrens, the only known nesting population in the upper Potomac River tidal zone. Sadly, breeding pairs have not been documented in the preserve for several years. Their decline is perplexing, perhaps due to loss of habitat. For nesting, these birds prefer tall, dense, emergent vegetation in or next to water. Males build football-shaped, coconut-size nests by weaving grasses through and around cattails or rushes and they construct “dummy nests” to perhaps deceive predators. Females line one of the nests with grass or other fine materials.

Woodpeckers are cavity nesters. Pileated woodpecker males, for example, carve holes in large trees, often dead trees. This “Woody Woodpecker” bird with a bright red crest makes an oblong-shaped entry hole, rather than the circular shape of most woodpecker holes. During nest-building season, people can see them tossing out woodchips from inside the hole. The nesting cavity can be from 10 to 24 inches deep.  Conservationists often urge people to leave dead trees or snags for woodpeckers and other birds.

Wood ducks also build nests in tree cavities, natural holes or holes left by woodpeckers, usually near water. Wood ducks cannot make their own holes. Females pluck down feathers from their breasts to line the nest.  Some parks like Huntley Meadows have specially-designed boxes mounted on poles to provide artificial nesting sites for wood ducks. Proper dimensions are critical, especially for the entry hole.

Many bird species, especially game birds like turkeys, pheasants and quails, nest on the ground, in habitats like fields and grasslands. Northern Virginia has very little suitable habitat left for these birds.

One of the most familiar ground-nesting birds is the Canada goose, a bird that builds a bowl-shaped nest from lichens, moss, grass and other plant materials near water, like Huntley Meadows Park’s wetland, usually on a place that gives them an unobstructed view in most directions.

Out on Virginia’s barrier islands, some shorebirds, like piping plovers, make nest scrapes, shallow, saucer-type depressions above the high tide line.  Piping plovers are pale brown and white birds, six to seven inches long. In Virginia, they inhabit wide open beaches and sand or washover flats.  Known as “precocial birds,” the chicks leave the nest within four to six hours and can find food on their own.

People may want to avoid tree work in the spring and early summer since this is prime nesting season for most birds. We often don’t know which birds are nesting where until fall when leaves start falling.

Carolina wrens are common backyard birds and resourceful nest builders. Many times, Carolina wrens have chosen my clothespin bag as a nest site. When I got a new bag, I hung the old one on a low tree limb and they immediately made themselves at home there. A few years ago, in six hours, they built a nest in a pair of L.L. Bean shorts hanging on my clothesline.

One summer, a Carolina wren spent fall nights in my raggedy, gray, Victoria's Secret, cotton, hip-hugger panties pulled out of the rag bag and hanging on my clothesline. To experiment, I also put out newer hot pink, bright turquoise and school bus yellow cotton underwear. No go. “My” wren chose the ratty gray.

Ornithologists say that this little bird is adaptable. I'll say.