Vienna was a Union town during the Civil War. Living historians interpret life at an encampment during the one-day event on July 25. 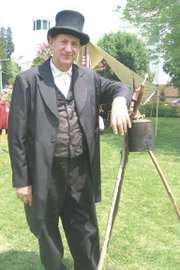 Ted Ballard, who grew up in Vienna, warns young recruits of the dangers of ‘booze and loose women.’

Living Civil War history is coming to the grounds of Freeman House on July 25.

"This year, it will be a bit different," said Sarah Jane Brady, Freeman House administrator. "Last year, there was just the Blue, Union troops. This year, there will be both Blue and Gray. Kids will see what it’s like for both forces to co-exist." Vienna supported the Union during the Civil War.

That’s not the only change for this year. A "wash-woman," Moe the horse, a railroad expert, a schoolmarm and camp nurse are 2009 additions. A 19th century ambulance, a horse-drawn wagon, will also be on display.

Patrick O’Neill of Vienna is coordinating the encampment again this year. O’Neill, who will assume the character of chief steward to the camp surgeon, participates in six or seven encampments each year.

"We, at this event, are living historians, showing the general nature of events in progress rather then re-enacters who recreate a specific military action or battle." At living histories, spectators can "mingle in all of the action" and be a part of the activities. Artillery this year will be "gray," O’Neill said.

"At re-enactments, they are only distant observers separated from the activities in progress. For our encampment, not a re-enactment, we are set up for the purpose of close interaction with all visitors." Visitors can talk to the characters, ask them questions and participate in activities.

O’Neill described the environment as a "rest and refurbishment camp for troops having fought in the Battle of Gettysburg."

The children’s immersion camp, a big hit last year, once again runs along with the encampment. "Recruits" are inducted and treated to military life. "They go through the motions for each camp — artillery, infantry, medical and cavalry — spending time in each camp as new recruits," said O’Neill.

Ted Ballard, who grew up in Vienna, repeats his character of a temperance leader, a Cold Water Army member warning "against booze and loose women." Dr. Charles Raugh of Falls Church, not surprisingly, assumes the character of camp doctor.

VIENNA WAS THE SITE of several skirmishes, one centered from the historic Church Street area from Freeman House to the site where the Vienna Community Center now stands.

"On June 17,1861, 700 men of an Ohio regiment were sent out by rail from Alexandria to make a reconnaissance in force," said O’Neill. "Part of the unit was left in Falls Church and 300 continued to Vienna. The train was being pushed not pulled. When it reached the vicinity of the current community center, it was taken under fire by a Confederate artillery battery, which was hidden on the hill across from the Freeman House. When the firing began, the engineer panicked, disconnected the engine and fled, leaving the train and the troops to fend for themselves. They returned to Alexandria on foot."

The 150th anniversary of the start of the American Civil War is in 2011, and Historic Vienna, Inc. and the Town of Vienna are exploring ways to recognize the anniversary in Vienna.

Community supporter Dan Dellinger heads the task force set up for this purpose by the Vienna Town Council.

"I feel that any type of living history event makes history come alive for the people who participate as either living historians or as participants who watch," said Brady. "It gives a sense of what went on."

Brady emphasized the family-friendly activities. "People should definitely bring their children. Children can go up and meet soldiers and civilians and learn about Civil War life. They can pet Moe the horse, too."

Children can visit the Yankee schoolmarm in residence at the Little Library, see clothes washed the old-fashioned way, hear music on the front porch of Freeman House and, also at Freeman House, look over Civil War artifacts found in the Vienna area.

"We’re thrilled and excited to have this second encampment," said Brady. "It will be a wonderful event. We hope to make it bigger every year."

THE CIVIL WAR ENCAMPMENT runs Saturday, 9 a.m.-4p.m. on grounds of Freeman House and the Town Green. The all-day encampment is free to the public, sponsored by Historic Vienna, Inc. and the Town of Vienna. Kids’ Immersion Camp runs 9 a.m.-2p.m. and costs $30 for town residents and $37.50 for those who live outside the town.

See http://historicviennainc.org/ for more information on the encampment and historic Vienna activities.