During the summer, Great Falls native Keslie Tomlinson has to practice her starts on a makeshift skeleton sled in the parking lot at South Lakes High School. She’s attempting to qualify for the 2010 Vancouver Winter Olympics in the sport. 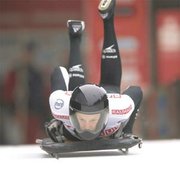 This past winter, Tomlinson was named the 2009 Women’s Skeleton Athlete of the Year. 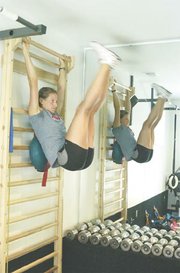 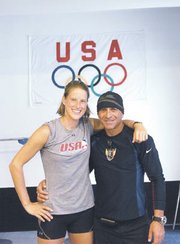 “We’re going for top three,” said trainer Greg Petrosian (right) of Tomlinson (left) and her desire to medal at the 2010 Olympics in Vancouver.

The temperature hovered around 90 degrees this past Sunday morning in the parking lot of South Lakes High School, and yet Great Falls native Keslie Tomlinson had her sled out.

With no snow in sight, though, this was no ordinary sled. Then again, what Tomlinson is attempting to achieve in the next year and a half isn’t exactly orthodox. Just ask her trainer, 51-year-old Greg Petrosian, to describe what his pupil is training for.

“She’s a crazy woman going head first down a track at 80 miles per hour,” he said with a laugh in his Russian accent from the recently renovated weight room in the basement of his Reston home. It serves as Tomlinson’s training headquarters for the time being.

An avid horse back rider as a child growing up in the area and a college field hockey and lacrosse player at Denison University, Tomlinson is in the midst of what has become a seven-year quest to qualify for the 2010 Vancouver Winter Olympics in the sport of skeleton.

Skeleton is the competitive form of sledding -- or sliding if one goes by the sport’s vernacular -- in which athletes travel down bobsled courses headfirst on their stomachs at speeds sometimes exceeding 80 mph while experiencing forces up to 5Gs. A skeleton sled, though, has no steering or braking mechanisms.

Tomlinson, who now resides in Potomac Falls, discovered the sport when it made its return to Olympic competition at the 2002 Salt Lake City games, where she was working for the United States Olympic Committee. Then, in December 2002, Tomlinson made the trek to Lake Placid, N.Y., one of only three skeleton training facilities in the country, to try it out, “not having any intentions of pursuing it,” she said. The only instructions given were, “Have fun, hang on, and don’t fall out … It turned out I wasn’t too bad at it.”

In January 2008, Tomlinson took home the U.S. National Championship for skeleton, and after impressing on several minor skeleton circuits over the years, made her debut on the World Cup Tour this past winter. She was named the 2009 Women’s Skeleton Athlete of the Year.

&lt;b&gt;NOW SHE'S BACK&lt;/b&gt; in Northern Virginia for the first summer in a long time. It’s the offseason in skeleton circles since there are currently no tracks with ice anywhere in the world. That doesn’t mean Tomlinson’s taking any time off, though.

She and Petrosian -- they met in 2002 and began working together extensively this past April -- train six days a week, working on speed, strength, endurance, and acceleration. Tomlinson spends hours with her makeshift sled on wheels in the parking lot at South Lakes, practicing her starts along the curb since steering can be a problem with “a glorified skateboard” made of plastic and held together with layers of duct tape.

Sometimes she’ll take the sled out in her neighborhood, which usually elicits some curious questions from youngsters and adults alike. Tomlinson remembers one parent came up to her and asked where she got the sled because her child would not stop nagging her about getting one.

When she’s not rolling around, Tomlinson usually makes the five-minute drive from South Lakes to Petrosian’s place. An unassuming house near Southgate Community Center in Reston, a look into the backyard reveals a new addition that houses a split level, two-room basement gym.

Tomlinson will do a litany of exercises there, all aimed at perfecting her race start and fitness. Aside from the usual array of weights, benches, and elliptical machines, there’s a set of bungee cords that Tomlinson hooks herself into so she can simulate bursting from a kneeling position.

There’s also a set of bars in a corner where Tomlinson strengthens her core muscles, including a Petrosian favorite that he brought over from Russia in which his pupil must repeatedly raise her legs completely over her head.

“The goal is not just to make the team,” said Petrosian. “My goal and her goal, too, we’re going for top three. If she put together everything and finishes strong, she’s capable of doing that.”

“We spend six months basically training for the first five seconds of the run,” said Tomlinson.

&lt;b&gt;BUT THE SACRIFICES&lt;/b&gt; Tomlinson has had to make span years, not months. Because there are only three skeleton training facilities in the country (Colorado Springs, Colo., and Chula Vista, Calif., are the others) Tomlinson, who in her down time is also pursuing a master’s degree in sports administration at Northwestern, has been forced to live out of a suitcase six months of every year, spending extended periods at national training facilties. Throw in the fact that she went to a boarding high school in Maryland and it means Tomlinson has been eating dining hall food for the better part of 14 years now.

With qualifying for the games fast approaching beginning in October, Tomlinson swore off alcohol back in February and submitted to a regimented nutritional plan created by Petrosian, a former professional long jumper who is also a former strength and conditioning coach for D.C. United and at American University.

The money, though, may be the hardest part. Tomlinson estimates she spends around $25,000 a year on training and competition. The sled she uses in competition costs $8,000 by itself. Tomlinson has had waitress jobs over the years, but that’s not nearly enough to cover her expenses. She counts on sponsors, family members, as well as donations to fund her dream.

“I’ve sacrificed everything from my social life to my best friend’s wedding to even just not being home,” said Tomlinson, who turned 28 this past Monday. “I can’t tell you the last time I’ve been home for Thanksgiving. But on the flip side of that, my friends and family have been the most supportive people in my life. Every athlete goes through their ups and downs and periods of possibly wanting to hang it up and I’ve been through that many times and they’ve kind of kept me going.”

This fall and winter, though, is when Tomlinson will truly find out if she can forge ahead in a sport she picked up on a whim one winter. The U.S. National team trials begin in October, with the top three men and women named to the World Cup team. The actual Olympic team is based off the accumulation of points in those World Cup races and will be revealed in January.

Until then, just look for the “crazy woman” with a dream, riding her sled around a high school parking lot.

“I’m not sure why I got involved with a winter sport because I hate the cold,” said Tomlinson. “But I think for me, [in an] Olympic year, everything has been put into perspective … it’s all or nothing and I’ve really embraced that.”