Event hosted by SALT and the Virginia Coalition of Latino Organizations. 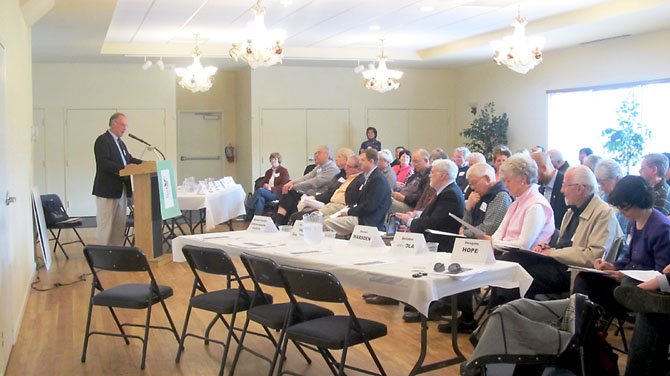 John Horejsi, founder of Social Action Linking Together (SALT), co-hosted a legislative wrap-up session with the Virginia Coalition of Latino Organizations (VACOLAO) in Vienna on Saturday, March 31, held at the American Legion Auxiliary Unit 180. SALT is a faith-based nonprofit that lobbies for social justice issues at the state and local level. Photo by Victoria Ross.

Del. Patrick Hope (D-47) brought props to the legislative wrap-up session hosted by Social Action Linking Together (SALT) and the Virginia Coalition of Latino Organizations (VACOLAO) in Vienna on Saturday, March 31, held at the American Legion Auxiliary Unit 180. He said Virginia gives away $479 million in tax loopholes, and told the 60 supporters that that money could be used to create jobs. "We could provide jobs for 10,000 home-care workers or send 51,000 children to pre-k," Hope said.

Fairfax County’s Democratic lawmakers knew they were preaching to the choir – and some of the preachers - at the legislative wrap-up session hosted by Social Action Linking Together (SALT) and the Virginia Coalition of Latino Organization in Vienna on Saturday.

But they wanted to let supporters know that, despite a bruising general assembly session for Democrats, they were still fighting and organizations like SALT do make a difference.

"Your presence is felt in Richmond," said Del. Patrick Hope (D-47), co-chairman of the Progressive Caucus of the General Assembly. "It means something when lawmakers hear from you."

EACH LEGISLATOR took a few minutes to speak to the crowd of about 60 people at the American Legion Auxiliary Unit 180 in Vienna. Some provided insight and a little levity about the session. Hope brought props.

He had SALT volunteers hold up two posters. One poster, with a photo of filmmaker Steven Spielberg and a yacht, illustrated a list of loopholes of giveaways that amounted to $479 million dollars.

During the first half of the 2012 legislative session, the caucus handed out a report card with across-the-board "F" grades in 10 "subject" areas that included job creation, education, health care, voting rights, immigrants’ rights, gay rights and women’s reproductive rights. 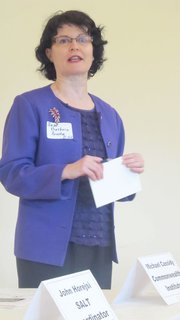 Sen. Barbara Favola (D-31) said she found her first General Assembly session to be "an interesting study in human nature" during the legislative wrap-up session hosted by Social Action Linking Together (SALT) and the Virginia Coalition of Latino Organizations (VACOLAO) in Vienna on Saturday, March 31, at the American Legion Auxiliary Unit 180. The audience applauded when she said she was frustrated by legislators who "know the cost of everything and the value of nothing."

Senator Barbara Favola (D-31) reflected on her first general assembly session, and drew laughter when she commented that she found Richmond "to be a fascinating place, an interesting example in the study of human nature." She said it was possible to get things done in Richmond, "if you don’t hold on to resentments and approach lawmakers individually, and with a solution."

She said next year she has two primary goals: to index the minimum wage every year, and, working with Del. Hope, to give foster children between 18 and 21 "more of a safety net" when it comes to allowing them more time to opt back into the foster system.

Del. Alfonso Lopez (D-49), who brought his 5-year-old son Aaron to the forum, opened his remarks with an introduction in Spanish, telling the group that, although he was the first Latino Democrat in the history of the Virginia General Assembly, "I know I won’t be the last."

The freshman lawmaker garnered attention in Richmond this year by filing a state-level Dream Act, which some Republican legislators called "the Dream On" act. It would give children of illegal immigrants a path to U.S. citizenship through college or military service, and would allow some illegal immigrants to pay in-state tuition to attend Virginia's public colleges and universities. 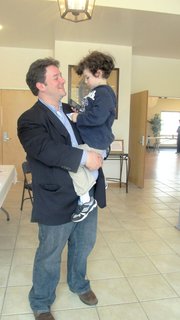 Del. Alfonso Lopez (D-49) brought his son Aaron Rafael, 5, to the legislative wrap-up session hosted by Social Action Linking Together (SALT) and the Virginia Coalition of Latino Organizations (VACOLAO) in Vienna on Saturday, March 31, held at the American Legion Auxiliary Unit 180. He addressed the group in Spanish first, and said that, although he was the first Latino Democrat in the history of the Virginia General Assembly, "I know I won’t be the last."

Senator Dave Marsden (D-37) told supporters at the meeting it was critical to tackle Republicans lawmakers who are handcuffed by taking the Americans for Tax Reform (ATR) pledge. Marsden has consistently criticized 29 of his colleagues in the Virginia General Assembly for signing a "no tax" pledge to Grover Norquist's special interest group.

"How can you take your oath of office in the General Assembly knowing that you have a prior allegiance to a special interest that dictates how you perform your duties?"

Marsden said even if pledge-takers are convinced that a tax increase is necessary, they are unable to compromise because their allegiance is to the ATR instead of their constituents.

"In terms of us getting off dead center on the budget, we have to tackle Grover Norquist and the ATR pledge." Marsden said voters have a right to expect that lawmakers will be able to compromise to meet the needs of the commonwealth.

"But this pledge has made compromise impossible," Marsden said, getting a round of applause from the audience.

"I thought it was interesting to hear that they think we can make difference by contacting lawmakers and letting them know how we feel about issues," said Anne Suter Zimmer of Oakton. "It was an empowering message."

"We are lucky to have legislators who really care about people and know the issues," said Kay Walter of Reston, a member of SALT. "It gives us faith to know that our advocacy is making a difference."

JOHN HOREJSI, founder of SALT, said he was pleased by the informal give-and-take of Saturday’s forum. He noted that lawmakers chose to sit in the audience rather than at a separate table. "I think it was more unstructured and relaxed, which allowed for a better dialogue," said Horejsi. SALT is a faith-based nonprofit that lobbies for social justice issues at the state and local level.