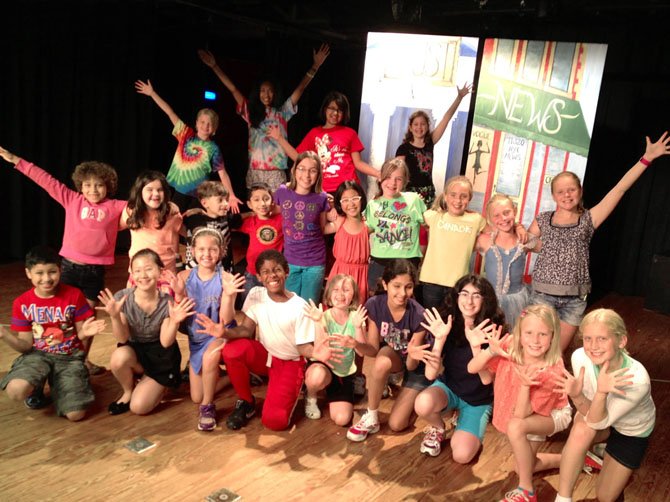 What child has never imagined herself to be on-stage, bowing to adoring fans? If you are a child living in Fairfax County, you have a good shot at stardom. Local theatre opportunities from grade-schoolers to high-schoolers crop up throughout the year. Vienna hit the jackpot.

Moonlit Wings Productions [MWP] contracts with the Fairfax County Park Authority to operate two drama camps throughout the summer. The in-house program, Camp Drama, is based at Providence Recreation Center in Falls Church. The touring company – Broadway Biz – moves around Fairfax County every two weeks. On July 23, Broadway Biz came to Thoreau Middle School where 24 young thespians, age 7 – 14, practiced and rehearsed from 9 a.m. to 4 p.m. every weekday. On Aug. 3, “Moonlit Musical” premiered in Vienna at Thoreau.

“MOONLIT MUSICAL,” an original children's musical, is a journey of personal discovery as seen through a young Lebanese girl who turns 13 on the night of a full moon. Lulu’s story is told Dickens’ Christmas Carol style, where the audience meets the child Lulu, the present Lulu and the future Lulu.

In a serendipitous coincidence, the Vienna performance, scheduled for Aug. 3, is played out during … you guessed it … a full moon phase, which, meteorologically-speaking, appeared on Aug. 2.

“We really complement each other’s work,” said Nguyen. “I absolutely love teaching. I love to be able to inspire kids to learn the things I love, in hopes they will love it just as much as I do.”

Rather than pay for “royalty” scripts, MWP sent out a call to aspiring playwrights about the country. MWP is field-testing their shows, evaluating the scripts in return for free use.

Tickets were abandoned in favor of admission donations. Guests were asked to bring gently-used clothing and shoes that were to be forwarded to a United Nations relief fund. At each performance of Camp Drama and Broadway Biz, contributions on behalf of regional and global needy, are accepted. 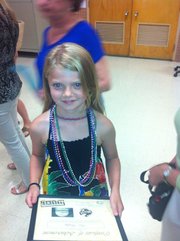 Photo Courtesy of the Murphy family

MWP’s County-sponsored theatre camps will produce eight shows during its season, four of which culminate the end of Broadway Biz, and four finish Camp Drama programs. Each production is different from other ones. That’s a lot of work.

From its first production, Disney’s “High School Musical,” to its current camps, Chaya estimates MWP will have trained 1,000 kids in Fairfax County.

To celebrate its fifth year of theatrical production, MWP is hosting a Red Carpet Picnic on behalf of the annual U.N. International Youth Day, celebrated on Aug. 12.

THE RED CARPET PICNIC features “food, fun, and live performances, a ceremony to honor theatre and the future leaders in our community, and photos and fun at the Red Carpet, just like in Hollywood,” Chaya said.

The banquet features special performances and honors MWP artists and actors. The banquet, scheduled for Sunday, Aug. 12, is open to the public. It will be held at Providence Recreation Center at 7525 Marc Drive, Falls Church.

Tickets at the door are for $10 for youth, $15 for adult. All proceeds go to educational theatre for the youth in Northern Virginia.

Eight-year-old Stella Lee is here from Korea on a month-long vacation. A family friend suggested the drama camp to Stella’s mother.

“I learned that the most important thing is don’t be shy to perform in front of everyone,” Stella said, who admitted she was a “bit” shy when she first started Broadway Biz in Vienna. “Now, I’m not really shy.”

Photo Courtesy of the Zahalsky family

Daria Zahalsky, a rising eighth-grader at Kilmer Middle School, has participated in previous acting camps and tried Moonlit Wings this year. She said she liked working with original scripts. “It was fun learning about new music he made up,” Daria said. “It was fun. I feel a little more confident now.”

Her most important piece of advice for fledgling actors: “Everyone can do it if you’re willing to work on it,” Daria said. “If you’re lazy, this isn’t a good area.”

Carly Miks, interning as assistant choreographer, went through Vienna schools, graduating from James Madison High School in 2011. She is a sophomore at Virginia Commonwealth majoring in dance.

In every two-week theatre camp, the young cast rehearses and fully stages a musical production, as well as participating in a variety of artistic activities, from movie making to technical theatre production.

Each production is partnered with a special community outreach event from canned food drives to school supplies.

“We strive to not only be players of the stage, but also of the community at large,” Chaya said.

“The kids are so excited and thrilled that someone is writing about them,” Chaya said. “They feel like super-stars.”

To learn more about Moonlit Wings Productions, go to www.moonlitwings.org.