McGowan to start against Wootton, Morton could see time. 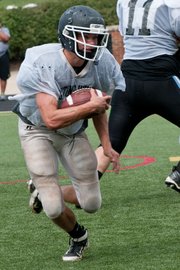 Whitman junior Zac Morton will start at running back against Wootton, but could see time at quarterback this season.

Potomac — The Whitman football team will enter its season opener with a new quarterback for the second consecutive season when the Vikings take the field against Wootton at 6:30 p.m. on Friday, Aug. 31.

After Henry Kuhn, a pocket passer and three-year starter, played his final season in 2010, Michael Flack, a converted receiver, took over at quarterback in 2011, bringing a running style to the position. Now head coach Jim Kuhn has his choice between an athlete and a game manager for the 2012 campaign — a decision that could change throughout the season.

Junior Zac Morton and senior captain Kevin McGowan spent time at quarterback during the preseason. Both could see time during the regular season, but McGowan will start against Wootton, while Morton lines up at running back, according to Kuhn.

“Zac is a tremendous athlete, so whether he plays quarterback or whether he plays running back, he’s going to be on the field on offense,” Kuhn said. “He’s probably our best skill guy. He brings the most weapons to the table, definitely. Kevin is just a really savvy, smart football player. He’s really wise; he’s a really smart kid. He controls the game better. Zac is an athlete; Kevin is going to run the game. It’s just kind of a difference in personality in what we want to be.”

Whitman graduated most of its starters on offense, so coaches have spent a lot of time teaching scheme and technique during the offseason. While the Vikings are an offense in transition, Morton figures to be a threat once he touches the ball, whether he’s taking snaps or taking hand-offs.

“It’s always going to be frustrating when you start from the beginning,” Morton said in regard to the Vikings’ offense, “but I think with the guys we have, they’re smart enough to realize what they have to do and I think we can get out there and be fine.”

On Defense, senior end Joe Granger should be an impact player on the line, along with Hunley and Sobczyk. Junior safety Nicholas Newsham, senior cornerback Justin Knighton and senior outside linebacker Billy Lee will also notable defenders.