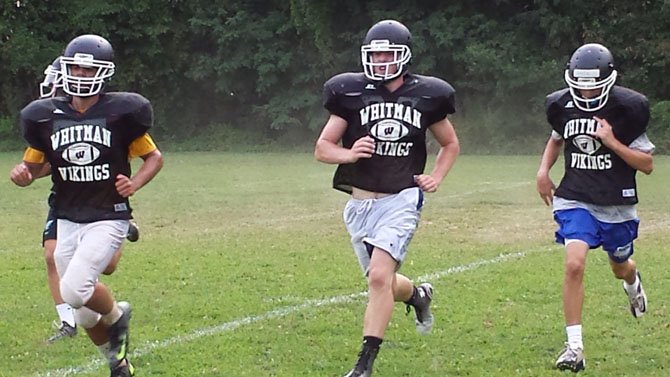 Members of the Whitman football team go through a conditioning during a recent practice. Photo by Jon Roetman.

The Whitman football team has some big shoes to fill after the graduation of running back Zac Morton.

Morton, now a freshman on the University of Maryland football team, was the focal point of the Vikings offense in 2013. As a senior, he accounted for 1,704 yards of total offense, including 1,499 on the ground, and scored 17 touchdowns. Morton’s contributions helped Whitman to a 7-3 record, but the Vikings missed the playoffs by a narrow margin.

Entering the 2014 season, Whitman will need to find a way to compensate for the loss of its best player. Eighth-year head coach Jim Kuhn said the Vikings will look to throw the ball more on offense, using a more balanced approach to help offset the loss of Morton.

Senior quarterback Evan Smith, a 5-foot-9 left-hander, returns for his second varsity season. He completed 49 percent of his passes for 1,023 yards and eight touchdowns, and was intercepted 10 times as a junior. He’ll be relied upon to make a bigger impact in 2014.

“Last year it was, 'Zac is our feature, you just make a play here and there, don’t lose a game and we’re good.' Now, [quarterback Evan Smith] needs to step into that role of being the leader and taking us to the win.”

“The last couple years we’ve been a run-first team,” Kuhn said. “We’re going to be kind of a 50-50 run-pass team. We’ll throw the ball around a little bit. Evan is coming back at quarterback with a year’s experience under his belt , so we need him to step up.

“… Last year it was, 'Zac is our feature, you just make a play here and there, don’t lose a game and we’re good.' Now, [Smith] needs to step into that role of being the leader and taking us to the win.”

Smith will have a pair of tall targets to work with. Anton Casey, a 6-foot-3 tight end, is committed to Brown.

Kuhn said Casey needs to be able to take a short pass and turn it into a long gain.

“I look for him to really cause people matchup problems,” Kuhn said. “He’s going to be tough against any linebacker. I look for him to be a real leader in the pass game. … He’s as good a tight end as there is in Montgomery County.”

Kuhn’s son, junior Jake Kuhn, is a 6-foot-4 basketball player who can make plays at receiver.

“He’s got excellent hands, runs excellent routes,” Jim Kuhn said, “and being a coach’s son, he’s been around the game his whole life.”

On defense, senior Matt McClanahan and Pittsenberger will be impact players.