Wolverine athletes eager to prove themselves. 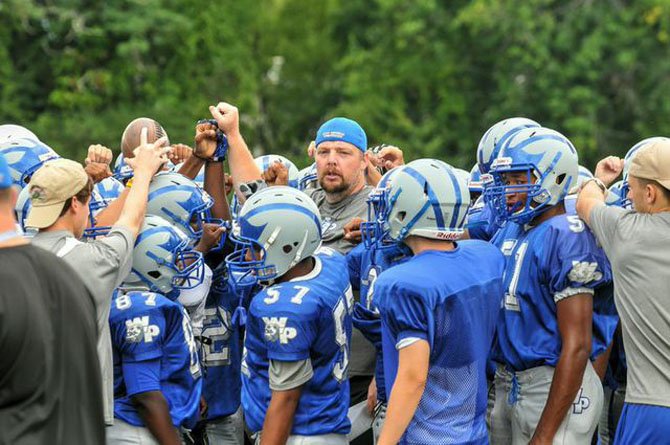 It took a few tries during a post-practice meeting, but first-year West Potomac head coach Jeremiah Ross got his players to speak at an adequate decibel level when acknowledging the most fundamental part of his program.

While Ross seemed to be stressing the importance of accountability and teamwork, several Wolverines are already plenty motivated to do their jobs.

Last season, much of West Potomac’s on-field responsibility fell on the shoulders of DeMornay Pierson-El, a supremely talented athlete who is now a freshman on the University of Nebraska football team. Pierson-El played on both sides of the ball and special teams. After playing receiver as a sophomore and running back as a junior, Pierson-El moved to quarterback when starter Preston Jones was injured in the season opener against Centreville. From there, the West Potomac offense revolved around Pierson-El’s ability to make plays with his arm or his legs.

This year, Ross is implementing a no-huddle, spread offense that should give multiple Wolverines the chance to make an impact.

“I like the new offense he brings,” senior receiver Marquis Saldana said. “It’s a lot more complicated, but I believe it will work if we do our jobs. … This year will definitely be the year that you’ll see more weapons.”

Ross’ offense isn’t the only thing that has the Wolverines’ attention. Ross comes to West Potomac with a wealth of experience, as a coach and a player. The California native was an accomplished offensive lineman at Rancho Alamitos High School in Orange County. He attended Fresno State, where he was a three-year starter at right tackle and graduated in 1999. 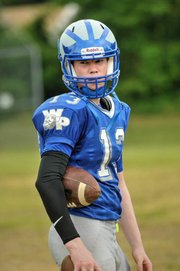 After his playing days ended, Ross became the head coach at Crespi Carmelite High School in Encnio, Calif., where he won a state title and coached University of Oregon center and NFL prospect Hroniss Grasu, along with future Division I quarterbacks Kevin Prince (UCLA) and Bryan Bennett (Oregon). Ross was an assistant at Western Carolina University, and was recently the head coach at Caroline County High School in Milford, Va.

“He came from a school that won states (CCHS) and he’s trying to bring the same thing out here,” West Potomac receiver Daniel Asumadu said. “That’s what I’m trying to do my senior year. I’m not trying to go home crying. I’m going to play my hardest every time I’m on the field.”

Asumadu and Saldana are two targets in West Potomac’s talented receiving corps. Joining Saldana on the outside is junior CJ Burch. Joining Asumadu on the inside is junior Brad Schaefer.

Jones and sophomore Mark Ellis are competing for the starting quarterback position. Jones, a senior right-hander, started the 2013 season opener but suffered a broken wrist. Ellis is a lanky left-hander with potential.

“It’s going to start with the quarterback,” Ross said. “Between Preston and Mark, we’ve got to make good decisions there. Really, this offense predicates off the quarterback --- the option, the ability to make choices. Whether we’re running or throwing the ball, there are always built-in options. We’re trying to be a first- and second-down team and play fast.

“… Preston’s got a little bit more experience, a little bit older, so he’s got a plus in that factor. Mark is a very talented young kid. He’s got a very high ceiling. It will be interesting. … They’ve made it hard. They’ve both been great.”

Senior Josh Carter will see carries at running back. Senior left tackle Will Pendergraph and junior Tay Diggs are two of the team’s top offensive lineman.

“He came from a school that won states and he’s trying to bring the same thing out here. That’s what I’m trying to do my senior year. I’m not trying to go home crying. I’m going to play my hardest every time I’m on the field.”

Defensively, West Potomac will operate out of a base 4-3 alignment. Senior safety Glenn Rushing, senior linebacker John Eckardt and junior linebacker Kreshawn Dikes are some of the Wolverines’ top defensive players.

West Potomac will open the season on the road against Lake Braddock at 7:30 p.m. on Friday, Aug. 29. The Wolverines’ first home game is Sept. 5 against Fairfax.