More to Do to Clean Up the Potomac River
Votes

More to Do to Clean Up the Potomac River 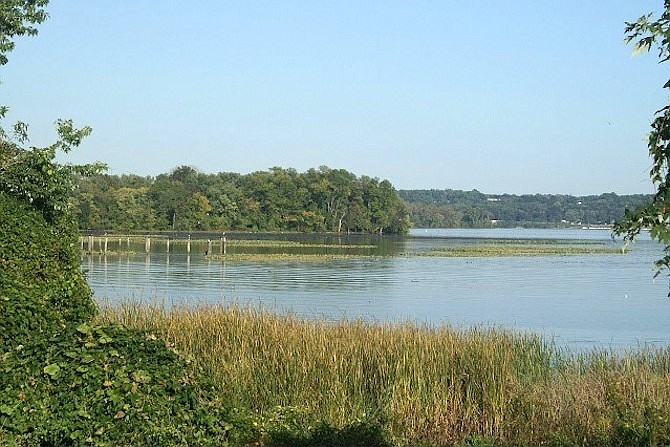 Common bottlenose dolphins are spotted in the Potomac River, seen as far from the Atlantic Ocean as the U.S. 301 Harry W. Nice Memorial Bridge.

Photo Courtesy of Josh Cohn via Bay Journal on Twitter

Anglers Josh Cohn and Connor Lynch snapped a photo of the shortnose sturgeon they caught in the Potomac River at Fletcher’s Boathouse, keeping it in the water to prevent harm.

Forest and vegetation that come to the edge of the Potomac River help to protect water quality from polluted stormwater runoff.

(Click on "Download .PNG" to see large graphic.) Challenges to the health of the Potomac River remain. Graphic courtesy of Hedrik Belin, potomac.org/river-update 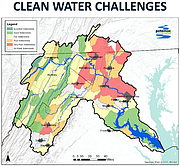 On April 9, Connor Lynch, an angler fishing on the Potomac River near Fletcher’s Cove, hooked and released a shortnose sturgeon, a fish not seen in the river since 2007. The Potomac Riverkeeper called the finding “Increasing evidence that the health of the Potomac River is improving.”

Common bottlenose dolphins are spotted in the river too, seen as far from the Atlantic Ocean as the U.S. 301 Harry W. Nice Memorial Bridge which connects Charles County, Maryland to King George County, Virginia.

These sightings are indicators that efforts to restore water quality in what George Washington called “the nation’s river” are making a difference, Hedrick Belin, President of the Potomac Conservancy, told attendees of a May 26 Zoom meeting of the Friends of Dyke Marsh.

The river is much cleaner today than it was in 1964 when then U.S. President Lyndon Johnson called it “a national disgrace.”

But “it’s not in the clear,” warned Belin. “It is still too polluted for swimming and fishing.”

The Potomac’s health worsened for the first time in a decade, according to Conservancy’s latest report card analyzing 2020 conditions, when the river got a grade of B-, declining from a B in 2018. It is greatly improved from its 2011 grade of D, but Conservancy experts say the recovery is plateauing. “Getting a B once does not mean getting a B the next time,” Belin told the group.

While industrial and agricultural sources have reduced pollution, especially since passage in 1972 of the federal Clean Water Act and adoption of Chesapeake Bay restoration policies, polluted stormwater runoff from urban and suburban areas is the major culprit today, the fastest growing pollutant.

Belin explained that deforestation of shorelines and impervious surfaces take away the land’s ability to naturally absorb rainwater. Forested shoreline buffers earned an F grade in the report card.

“When it rains, it pours pollution into rivers and streams,” Belin said. One inch of rain can generate 2,000 gallons of runoff from a typical suburban home, according to the Conservancy’s website.

Climate change is exacerbating the problems. Warming temperatures are bringing more intense storms and more volumes of water over shorter time frames. In 2018, for example, the Washington metropolitan region got almost 16 inches rain compared to a normal of 14 inches. The region is seeing more microbursts, he reported, which can cause more frequent, highly localized flooding.

Some storms can send more pollution from what are called “combined sewer overflow” (CSO) systems, like the sewer system in Old Town, Alexandria, dating to the 1890s. “The volume has to go somewhere,” Belin said, noting that historically engineers designed urban infrastructure to get water off streets. Alexandria and Washington, D.C., are upgrading their combined overflow systems, building underground holding tanks and then treating runoff at AlexRenew on Cameron Run or for Washington, D.C., the Blue Plains Wastewater Treatment Plant on the Maryland side of the river. Eliminating CSOs “will have a big impact,” Belin predicted. “Otherwise, you’d be swimming in sewage.”

Storms can erode streambanks and send sediments into waterways. Cloudy water impairs the growth of submerged aquatic vegetation that help filter nutrients and pollutants and provide food and habitat for fish, waterfowl and other wildlife. Underwater aquatic plants garnered a C- in the report card. Some fish species are in decline, the Conservancy reported last year.

Shortnose sturgeons (Acipenser brevirostrum) live in rivers and coastal waters from Canada to Florida, but spend little time in the ocean, according to the National Oceanic and Atmospheric Administration. They can reach up to 4.5 feet in length. In 1967, the federal government classified the fish as endangered.

Common bottlenose dolphins (Tursiops truncates) live close to the shore and throughout coastal and estuarine waters around the world. They are not considered to be endangered. In the 1840s, dolphins were seen as far upriver as Alexandria, Virginia, Karin Bruillard reported in the Washington Post.

On the way forward to a cleaner river, Belin advised, “We need to work with nature, not against it, replicate it.” More trees and healthy forests can help capture stormwater runoff. We need to build in smarter ways, strengthen clean water laws and restore degraded areas, including wetlands and floodplains. He challenged attendees to be Potomac River advocates.

The Conservancy works on multiple fronts to protect and restore the river, like tree planting and influencing public policy. The organization has protected over 60,000 acres and over 100 stream miles in the 14,670-square-mile Potomac River basin. “Clean water’s our north star,” Belin said. “The river’s the star of the show. It’s our backyard,” adding, “the Potomac’s making a comeback but there’s still more work to do to get the river to an A.”

Cosponsors of the meeting were the Four Mile Run Conservancy, the Friends of Little Hunting Creek, the Friends of Mason Neck State Park, Porto Vecchio Condominium and the Washington, D.C., chapter of the Society for Conservation Biology.