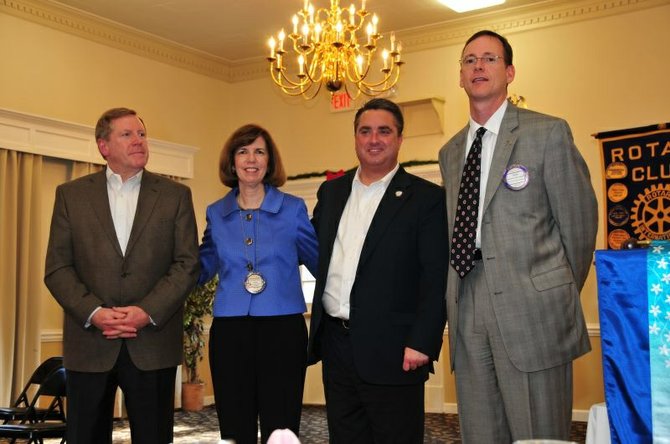 The Rotary Club of Fairfax welcomed City of Fairfax Mayor Scott Silverthorne as its keynote speaker at the Dec. 3 membership meeting at the American Legion Hall.

Over 60 Rotarians and guests were in attendance as the mayor shared updates on initiatives he has focused on since his election in May of this year. One of those initiatives has been a renewed outreach to the local business community. Many of the Rotarians in the audience were local business leaders, all having a keen interest in a prosperous City of Fairfax. Silverthorne also discussed a number of priorities and projects for 2014 including seeing Fairfax City’s housing market remain strong and partnering with the private sector to help address several major redevelopment projects either planned or currently underway. The mayor announced that the city had recently been re-approved with a AAA bond rating, enabling it to reinvest some bonds. This effort is projected to save the city several million dollars over the next few years. Much of the savings will be escrowed to pay for future capital improvement projects.

Emphasizing his focus on partnering with the business community, Mayor Silverthorne discussed several future projects, including working on a long-term strategic plan with input from the community. Fairfax Rotarian Bob Sisson, who introduced the mayor and works with him as city manager, said, “In my 20 years of working with our mayor, I know his passion is keeping the City of Fairfax as a premier small city, with extreme focus on the details of high quality services, and providing every city customer with a personalized response to every contact.”