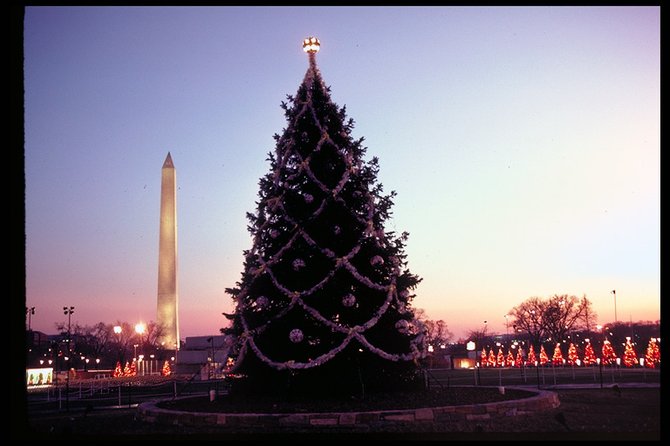 By By Jessica McKay

While all 50 years have been memorable for Nielsen, a few years particularly stick in his mind. In 1979 and 1980, the National Christmas Tree remained mostly unlit out of respect for the American hostages being held in Iran. However, upon their release on Inauguration Day in 1981, the National Christmas Tree was relit in celebration of their impending return to the United States. That day, Nielsen recalls that he was helping his wife Vivian who was working with her church to provide hot beverages to those attending the inauguration ceremony. “When I heard about the lighting of the tree, I took my camera and got over there,” said Nielsen.

Nielsen also fondly recalls the 1995 National Christmas Tree. “President Clinton himself financed the lighting of the tree,” said Nielsen. During that time, there was a partial government shutdown; to avoid the possibility of the National Christmas Tree going dim that year, Clinton requested to receive the electricity bill for the tree.

OVER THE YEARS, Nielsen has kept up with modern technology. He switched from Minolta to Nikon when digital photography began to flourish, and now he even has a remote-controlled tripod, a major improvement from 1963. In addition to capturing still images, Nielsen began to videotape the trees when enhanced technology allowed the lights and decorations to change colors and designs, so as to capture all of its displays.

In April 2003, Nielsen and his wife moved to Greenspring retirement community in Springfield. He has since become the “unofficial-official” resident photographer for the community, often taking photos for the resident-produced monthly newsletter and volunteering to operate the cameras in the community’s television studio. He has also produced several special video features for the studio.

After moving, Nielsen continued to make his way into Washington, D.C. each year on the morning following the tree lighting ceremony, just as he had done for the forty years prior. In early 2011, Nielsen even managed to capture a photo of the tree after it toppled from high winds. That tree, a blue spruce, had served as the National Christmas Tree since 1978.

This year, two of Nielsen’s sons and a grandson accompanied him on his trip to see the brand new Colorado blue spruce on the Ellipse donned with 450 LED light strings. “It was a family outing, just like my first photo in 1963,” said Nielsen. Nielsen has asked his youngest son Brian to carry on the tradition.

So what is Nielsen’s explanation for continuing the tradition for 50 years? He said plainly, “I got hooked on it.” The National Park Service got wind of his collection, and have displayed his National Christmas Tree photos from 1965-1995 on their website. Nielsen is very pleased that his annual tradition has helped to make the National Park Service’s records more comprehensive.

LAST YEAR, Nielsen produced a 31-minute video featuring each National Christmas Tree since 1963. Nielsen, who taught himself how to use Photoshop and Final Cut Express on his Mac computer, included snippets of National Christmas Tree history from each year and set the images to various holiday tunes. “I’m still working on it,” said Nielsen, who is planning to add the 50th tree to the video before the end of the year.

Additional information about Greenspring can be found at www.ericksonliving.com.