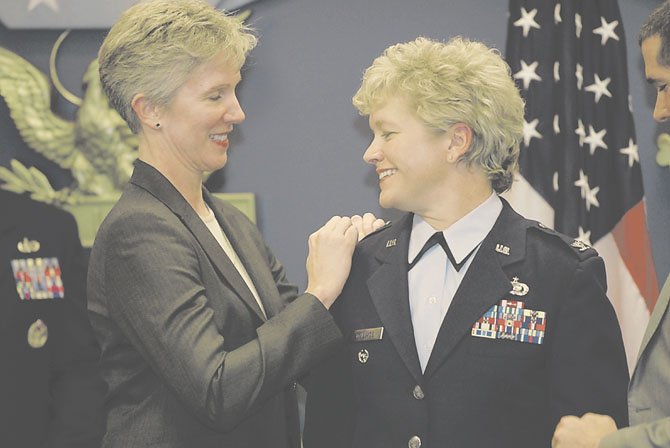 Kathy Knopf, left, pins colonel’s wings on her partner, Air force Col. Ginger Wallace, during Wallace’s December 2011 promotion ceremony in the Pentagon’s Hall of Heroes. Wallace and Knopf, who live in McLean, attended the State of the Union last week and sat in the first lady’s box. Photo by Photo Contributed.

McLean — Air Force Col. Ginger Wallace of McLean has watched the State of the Union Address for years. While she doesn’t always watch it all, she says there is one part that always gets her interest at the annual speech.

"I watch it more often than not, and one of the reasons is to see who is in the first lady’s box," she said. "There are so many people who have done so many wonderful things that have been honored that way."

Last week, Wallace was among those honored, as she watched Barack Obama give the address from the first lady’s box. Wallace, who has served for more than 20 years, made headlines in December when her partner Kathy Knopf pinned the rank of colonel on Wallace after the repeal of "Don’t Ask, Don’t Tell."

"I was extremely honored and humbled to represent thousands of gay and lesbian troops," she said. "It was just surreal to be there."

Wallace and Knopf have been together for more than 10 years, but it was always a part of her life that Wallace had to keep separate from her personal life. Until "Don’t Ask, Don’t Tell" was repealed, she thought the separation would always remain a part of her life. She even feared it could harm her career if her relationship became known.

She told the American Forces Press Service that she hopes her story can be a "teaching moment" for young people who are bullied because of their sexuality.

Wallace has led airlift and intelligence operations during Operations Southern Watch, Provide Relief, Uphold Democracy, Allied Force, Enduring Freedom and Iraqi Freedom. She is currently training to deploy to Afghanistan in Spring 2012 through the Afghanistan-Pakistan Hands Program, according to the White House.

When it came to her attendance at the State of the Union, the wheels were set in motion the week before.

"I got a cryptic call Wednesday before the event from the White House asking if I was available that night, and I thought maybe it was some sort of pre-State of the Union event," she said. "When you’re there, you really key on every single word the president is saying. The room seems much smaller than it does on TV, and you’re also assigning you’re on camera at all times, so you don’t want to do anything embarrassing."

Wallace said she was especially struck by the conclusion of Obama’s speech.

"Those of us who have been sent to serve can learn a thing or two from the service of our troops. When you put on that uniform, it doesn’t matter if you’re black or white, Asian, Latino, Native American, conservative, liberal, rich, poor, gay, straight," he said at the speech’s conclusion. "When you’re marching into battle, you look out for the person next to you, or the mission fails."

Wallace said that was the moment when she thought she might cry.

"The fact that our president can say that was just perfect," she said. "A year ago, he couldn’t say those words, but now as gays and lesbians in the military, we’re allowed to be ourselves."

Wallace and Knopf were also able to attend the first lady’s receiving line and a reception after the speech with the president.