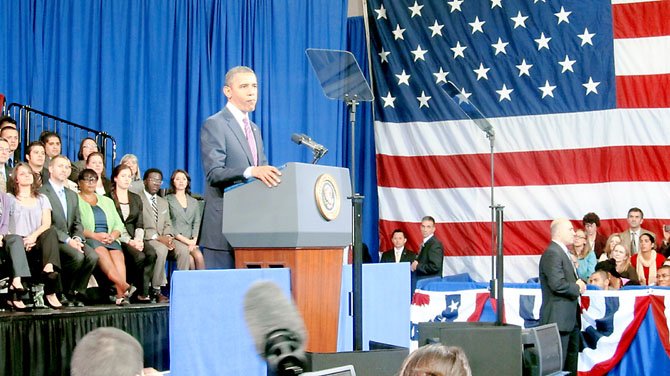 President Barack Obama spoke at the James Lee Community Center in Falls Church on Wednesday, Feb. 1 about his plans to revitalize the stalled housing market. His speech was short and pointed. Photo by Victoria Ross.

Tina Kotson of Springfield, a homeowner of five years, said she thought it would be fairly easy to refinance her current 5.65 percent mortgage and take advantage of today’s lower rates.

"I think we are homeowners any mortgage company would value. We pay our mortgage in full and on time, and we have excellent credit scores," Kotson said. "But I was surprised at how much things had changed when I called lenders to refinance a few weeks ago." 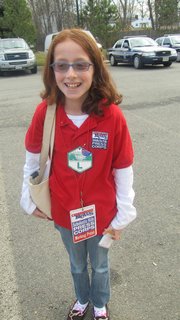 Abby Sacks, 11, a Scholastic Kid Reporter who attends Kings Glen Elementary School in Burke, attended her first presidential press conference as a reporter during President Obama’s visit to Falls Church on Wednesday, Feb. 1. "It was cool, but I expected it to be longer. He’s is trying to come up with easier mortgages for people, so that’s what I will write about."

She said because her home has lost nearly $100,000 in value since she and her husband purchased it in 2007, lenders told her she could only refinance up to 90 percent of the appraised value, which meant bringing nearly $50,000 to the table at closing.

"They told me there’s no impetus to refinance folks who are paying their mortgage and not in threat of foreclosure. It was very frustrating," Kotson said.

But Kotson said she was hopeful refinancing would be within reach after President Barack Obama announced a Homeowners Bill of Rights in Fairfax County last week.

Calling the continuing depression in the housing market a "make-or-break" moment for the middle class, Obama told a crowd of about 350 people at the James Lee Community Center in Falls Church on Feb.1, that the goal of his proposal is to make it easier for borrowers to refinance their loans, and get out from under oppressive mortgages.

Fairfax County housing advocates applauded the president’s plan, saying it will give homeowners critical protection from predatory lenders and important safeguards when they purchase a home.

THE AUDIENCE CHEERED when the President took Congress to task for dragging its feet on plans he announced during the State of the Union Address last week to kick-start the stalled housing market.

"I am sending Congress a plan that will give every responsible homeowner in America the chance to save about $3,000 a year on their mortgage by refinancing at historically low rates… What this plan will do is help millions of responsible homeowners who make their payments on time but find themselves trapped under falling home values or wrapped up in red tape."

According to Kerri Wilson, CEO of Reston Interfaith, one of Northern Virginia’s largest social services organizations, the nonprofit has received hundreds of calls since the recession from homeowners facing foreclosure or trying to get lenders’ attention to reduce their mortgage payments.

"We’ve heard from those who have lost their jobs and are afraid of losing their homes and everything they’ve saved for their families. We all know that too many Americans did not fully understand the financial implications of taking out mortgages they could not afford," Wilson said. "Based on our experience then, the Homeowners Bill of Rights will address the issues surrounding foreclosure crisis and offer individuals the help they need to stabilize their budgets and families."

Paula Sampson, executive director of Fairfax County’s Department of Housing and Community Development said the president’s initiative refocuses attention on the still faltering real estate market and the many homeowners who are still struggling.

"A ‘Homeowner’s Bill of Rights’ and the clarity and transparency it would bring to buying a home could be invaluable," Sampson said. "Just think of the thousands of homebuyers who might have avoided a predatory loan or unexpected rate swings, if the information had been clear and understandable at the closing table."

"(The American people) were hurt. By lenders who sold loans to people who they knew couldn’t afford the mortgages…and banks that packaged those mortgages up and traded them to reap phantom profits, knowing that they were building a house of cards."

THE PRESIDENT made it clear that his "aggressive plan" was not designed for those who have been irresponsible.

"Now, think about it…How many of you have had to deal with overly complicated mortgage forms and hidden clauses and complex terms? I remember when Michelle and I bought our first condo -- and we're both lawyers," he said, triggering laughter from the audience. "And we’re looking through the forms and kind of holding it up… reading it again…’What does this phrase mean?’ And that’s for two trained lawyers." 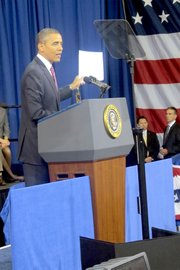 President Barack Obama held up a piece of paper and told the audience that "this is what a mortgage form should look like. This is it," he said to applause during his speech at the James Lee Community Center in Falls Church on Wednesday, Feb 1.

Quincy Springs, a Fairfax resident with the County’s Department of Neighborhood and Community Services, said the president was presenting Americans with an "opportunity." 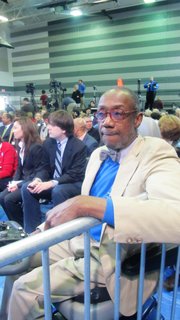 Claudia Lupoletti of Burke said she thought Obama struck the right tone in sending a serious message to lenders.

"I’m very happy to hear that he is going to hold lenders accountable and not just homeowners," Lupoletti said. "He’s right about the paperwork. We bought our first home in New York City and it was an all-day process with hundreds of complex forms. I think this is long overdue," she said.