County Shoots For Solution to Deer 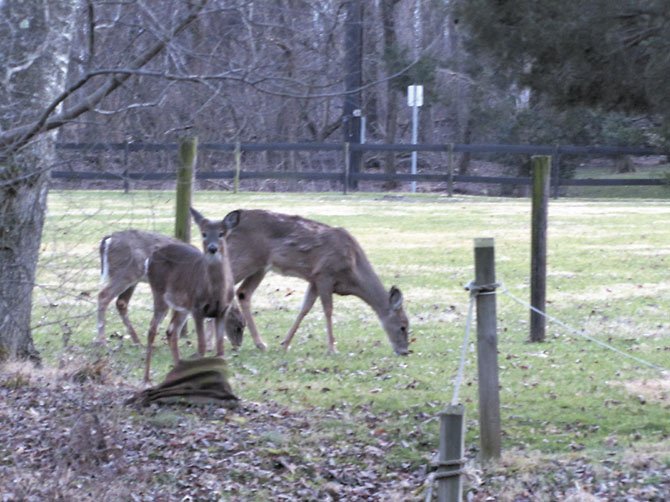 Deer find much to eat in Potomac neighborhoods.

"When we are hunting, we’re not just trying to hit the deer, there is actually a small area on the deer that you have to hit," he said to County Council President Roger Berliner and Councilmembers Marc Elrich and Phil Andrews.

In fact, bow hunters target an area about the size of a fist on the deer. Hunting licenses and safety qualification tests require strict accuracy, Eakin said.

"Every year, we’re sweating it out when it comes down to qualification moment. Our regulations is four out of four arrows or eight out of ten arrows in a four inch by four inch box from an elevated stand 15 yards away," said Eakin. "It’s challenging and takes a lot of practice. But the accuracy and the safety is extremely high."

As a result of the meeting, the Council will study the possibility of permitting bow hunters to hunt deer on private properties 50 yards from houses. Currently, bow hunters need to be 150 yards away from houses unless they have written permission from the homeowners.

"If the regulations were set up with a much more focused and specific description of what could be done to ensure safety, that would make it a lot more effective and doable for neighborhoods and individual property owners to both get involved and comply with the law," she said.

Because approximately 80 percent of the county is private, efforts to manage deer populations will need to include private land and encouraging landowners and hunters to manage deer herds on private property, according to the county deer report.

Petitions have recently been circulated by homeowners in Potomac neighborhoods asking if homeowners would give hunters permission to hunt on specific properties during the hunting season, mid-September to January.

Linda Rieger, a River Falls resident, told the Council subcommittee that there will always be some homeowners who are against hunting in residential neighborhoods. But she also said she found "an enthusiastic number" encouraged her in her efforts to allow bow hunting to control the deer population. But one homeowner threatened legal action if deer were hunted in their neighborhood, she said.

GILBERT BLOOM ASKED if the Council could "free us up and let homeowners be able to take action on their own." He advocated for hunting to be permitted year round, or at least on Sundays. "That’s a 1950s blue law kind of restriction," he said.

The number of deer-vehicle collisions increased from 1,930 in 2010 to 2,038 last year, according to the Deer Management Work Group.

That number probably underestimates the actual number of collisions by a third to a half since not all accidents are reported, said Rob Gibbs, head of the work group.

"We all know somebody who has hit a deer or who has had a close call," said Andrews. "Probably multiple people."

The County’s deer management work group publishes an annual report on what to do about deer.

In 2010, 6,887 deer were killed in Montgomery County in programs designed to reduce the population, including managed hunts, sharpshooting in county parks and more.

The Department of Parks conducts managed deer hunts in select county parks in the fall and winter, supervised by the department’s wildlife staff. Parks are closed when hunts are taking place. Only one is in Potomac, at Blockhouse Point.

The county began managed hunts in 1996.

While the county report gives no estimate of the current deer population, a report by Montgomery County Parks indicates that the number of deer could double every two years without some efforts to manage the herds.

The Goldmine Tract of the park, at the intersection of Falls Road and MacArthur Boulevard, is one of the largest contiguous forests in the county.

There are no plans to initiate deer management programs in C&O Canal National Historic Park at Great Falls, according to the report, which is blunt in its opinion: "This needs to change."

These areas are being impacted by deer overpopulation, and the effects spill over into nearby communities that have been complaining for more than a decade about deer-vehicle collisions and impacts to property.

"Initiating deer management on National Park Service land is a long and onerous process but that is no reason to ignore a problem that is negatively impacting the resources the park was established to protect. Efforts should start as soon as possible," the report urges.

Brian Carlstrom, deputy superintendent for the C&O Canal National Historical Park, attended last month’s meeting. If the county wanted to partner with the park service, and asked the park system for specific information to be studied, that could expedite environmental impact studies.

"We can do that," said Berliner.